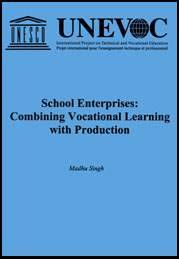 3.11 Mixes of private and public roles

The case studies have shown that the sponsors in school enterprises are mostly governments, private institutions, and donor agencies. Private sponsors include churches and non-governmental agencies. Their existence is separate from the management of the school.

The importance of an environment that will encourage and accept widely dispersed initiatives in such endeavours has long been stressed. Meanwhile, along with maturation in the development of national training systems have come both a rising awareness of local needs and increasing pressures on national budget: a combination that is encouraging decentralisation. However, state intervention is justified in limited situations such as financing training, direct provision, and various sorts of complementary policies.

Across countries, and even within countries, there are innumerable mixes of private and public roles. The so-called ‘nonformal sector’ in education and training is heterogeneous in many respects, and the very existence of this diversity lends flexibility and adaptability to national systems of education and training taken as a whole. It is among the ‘non-formal’ agencies that one will often find the readiest responses to new minor and, sometimes, major skill demands, along with perhaps the greatest diversity in degrees of formality and informality in the mixes and levels of skills taught, and in the tightness or looseness of associations with particular employers. The central question here is: how much public control or support should be introduced? and where public interventions are involved: how far responsibility and initiative may be decentralised?

Local business community are often willing and able to accept a much greater responsibility for productive activity in schools. There is enough evidence from a variety of countries to show that such activities can be cost-covering and thus be neutral in the public budget.

Increasingly, industrial and employers’ organisations have developed linkages with schools, and they design and implement production and training-related activities jointly with school staff. This may be under the heading of technology education or market analysis. Such programmes are based on co-operation between multiple centres of control. These are organisations at different levels that have a minimum capacity and an interest in participating in training and production that cannot be handled by the school.

Apart from such more institutionalised forms of interaction, there are also numerous occasions where individual schools make arrangements with individual farmers, artisans, or service institutions in the locality. It is more and more common for such activities to be funded by implementing agencies or through parental contributions.

Role of the State

Despite the several advantages of co-operation with local industry in the area of skill development, it is unrealistic to limit all skill development to industry. The extent and quality of the private sector is constrained by the nature of the economy and level of enterprise development. These constraints require a continuing presence on the part of the government to ensure an adequate amount and quality of training.

Vocational and technical education, especially at the secondary level, has remained a central concern for the state. Relating vocational education and training directly to employment has remained much on the agenda as it remains a key instrument for the state to confront social and economic problems of national proportions. Governments and policy makers are trying to reorganise their education so as to cope with rapid changes in the economy, in society, and in the world of work. Twenty years ago, employees were assigned specific routine tasks and were expected to perform them reliably. Today, an effective business operates under different assumptions. Workers are expected to identify and solve problems, learn skills, personally manage non-routine problems, and make decisions which require a broad understanding of the work context. Despite all their weaknesses, there is call for public technical and vocational education establishments to play a definite role in finding new ways of teaching and learning, in promoting the socio-economic development of communities, and in making learning more relevant for individuals and societies.

This includes a wide acceptance of the public technical and vocational education’s responsibility for the development of competencies relating to the changing world of work (coping with new technologies and production processes as well as the displacement of workers and the growing informal sector) and the structuring of education towards production skills and self-employment.

As a result, school enterprises are increasingly coming to be incorporated in government educational policy. The manner in which this is being done is unique in India where the government has delegated apex institutions to provide adequate guidelines on the planning and implementation of school enterprises. In China, also, the Open Door Policy, and the creation of Special Economic Zones (SEZ) in certain areas of China, have provided the momentum for vocationalising to change the ratio of general secondary school students to vocational school students.53 School enterprises have become an accepted part of the school with considerable support and guidance by state laws, local ordinances, and polices.54 Regulations governing strategic inputs into the education system ensure that the state still strongly influences what goes on in school enterprises.

At the same time, governments must acknowledge their limitations as the only agency of socialisation. Public vocational institutions are organisationally, pedagogically, culturally and financially constrained to provide relevant education for the fast changing world of work. Although government should not be relieved of its responsibility of providing core skills and knowledge, instruments can be designed for, and resources be provided to the schools for implementation. Other areas of learning, however, can be defined at the local level through a direct interaction between schools, community and other interest groups such as industry or cultural organisations, and be implemented with the support of those parties concerned. Here, the role of the national government would be more indirect: providing guidance, co-ordination, professional services and supplementary funding. Thus, while there may be a clear central responsibility for core skills, i.e., foundation skills in language and mathematics as well as basic knowledge, science and social studies, the production and enterprise dimension can solicit direct inputs from other agencies such as the community and the local business world. The nature and level of these contributions vary across countries and different socio-economic and cultural situations.

With international and domestic pressures for the development of primary education, secondary and vocational education may become major victims of budgetary squeezes; but with the expansion of elementary education on the one hand, and economic reform policies including globalisation and international competition on the other, the governments would be compelled to acknowledge the need for secondary vocational education.

Governments are confronted with the policy question of how far they wish to go in curriculum decentralisation and in allowing enterprises to participate in defining what youngsters should learn from school. In many countries, the problems of decentralisation deal with questions relating to equivalency of certification throughout the country: channels that would enable local enterprises to provide a meaningful input into curriculum decision-making. This requires great competence on the part of the planner and specialist to conceptualise curriculum structures that can absorb a good deal of local participation and handle fruitful interaction with enterprises and other local interest groups (e.g. industry, non-governmental organisations and parents). The practice, now common in industrialised countries, is for Ministries of Education to set a curriculum framework with attainment targets that specify types of skills and knowledge, and for appropriate curriculum organisations to develop model work plans for institutions to use as references.55 This state-controlled market model may be useful too for the less industrialised countries. Characteristic for this model are forms of co-operation between public vocational schools and private training enterprises or inter-company training centres. Small and medium-sized enterprises participate in this form of training predominantly. The government provides a regulatory framework for technical and vocational education in private enterprises or institutions.

(1) setting the objectives for the curriculum;
(2) approving the materials for use in public schools;
(3) financing those materials;
(4) ensuring that students from underprivileged backgrounds have an equality of access;
(5) disseminating the results of innovations, and reporting progress to the public at large.

The inclusion of production units has been very difficult for planners and managers to cope with, as it relates to a variety of expectations about combining education and production, and has to do with a domain of activities for which schools tend to be the least equipped to produce tangible results. A critical step in the planning stage is the effort to reach a consensus about what kind of production is required and what purposes it is meant to serve, the nature of technical skills, the connection between schools and the labour market, and the desirability of getting youngsters involved in productive work that may sometimes be considered exploitative and manual.

External agencies participate in school enterprise programmes in a significant way, being directly involved in key elements of the programmes, including the very design of the learning content, its substance, structure and methodology.

The case studies of The Don Bosco Technical Institute (India) and PIKA (Indonesia) illustrate that a greater involvement of donor agencies generally assures a successful launching of a new approach. However, the danger clearly lies in a poor spread of these innovative approaches. The disproportionate administrative attention and resource inputs, and the protective attitude of such initiatives have, in many cases, been helpful in improving the image of school enterprises. But it remains a very difficult operation to bring such initiatives from a pilot to a national scale and to transfer effectively full responsibility into the ministry mainstream. The PIKA case study has shown that, eventually, imported training institutions can come to be indigenised, or adapted and absorbed fully into indigenous practices. It illustrates that the support of an external agency has, over the years, been restricted to technical assistance for in-service training for teachers and managers, as well as for writing materials.

During the 1970s and 1980s, Western donor agencies found some encouragement in supporting the linkage between learning and working as this was seen to help improve the relevance of education and training for the world of work and, at the same time, offset the growing difficulties of covering the high unit running cost of learning institutions. In recent years, the development of school enterprises within the institutions of general secondary education has not attracted widespread donor support. These are now being conducted by governments themselves in cooperation with local industry. This is not a bad development as better long-term results seem to be possible where control over planning and implementation remains firmly with the appropriate national and private institutions.

This segmented approach has currently come under severe criticism. It is argued that if vocational training aid is to have a progressive orientation, its future strategy must be the establishment of diversified vocational training systems in which government, nongovernmental organisations, donor agencies and local institutions play an important role in building bridges between formal and non-formal vocational education as well as between formal and informal economic sectors.

By incorporating school enterprises as one basic type of model within diversified vocational training systems, it is possible to make these systems more flexible and responsive to labour and market conditions. The notion of school enterprises is an important basic type of training which strikes a middle ground between formal and informal economies as well as between formal and non-formal modes of technical and vocational education. Vocational training assistance should acknowledge the fact that greater involvement of donor agencies may assure a successful launching of a new approach. However, if it is not integrated into a diversified system development, it cannot have long-term and sustainable effects.