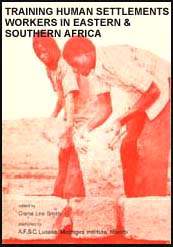 By the end of the week, the value of regional sharing of experience was very evident to all the Workshop participants who identified as useful follow-up:

1. Writing up and publishing the proceedings.
2. Further Workshops on other topics.
3. Networking of people and information.

This publication is the outcome of discussions on the first item. The participants decided on the type of document and contributions were later sought to help with producing it. Two participants followed up by doing the editing and organizing printing, and thanks are due to CUSO Canada and UNCHS-HABITAT who jointly funded the publication.

The seven days were too short to share all the information we brought with us, both documents and ideas, and although the meeting successfully kept its focus on training, it was clear that there were numerous other topics the participants had plenty to say about. Furthermore, participants realized there were other people in other countries who would benefit and, have much to contribute to similar, discussions; human settlement workers in the Region constitute a large and active group of people.

There is scope for other similar gatherings, including smaller sub-regional meetings which could provide a forum for intensive discussions of specific problems (such as local building materials production independent of South Africa) or discussions in another language (for example Portuguese). No specific topics, locations or participants were suggested although it was considered important to stress that. future Workshops should have the following characteristics which made this one a success:

1. Focus on the practical issues of self-help.
2. Concern with work at the community level.
3. Focus on workers with secondary or perhaps primary school background.
4. Participants to include field workers and community leaders.
5. Participation by a mix of NGO and government organizations.
6. Informality and associated modest costs.

Finally, the idea of starting an information sharing network emerged and was refined during the Workshop. By the end of the week Settlements Information Network Africa (SINA) had been launched, each participant being a founder member and undertaking to activate more members in their own or other countries. The initiating members hope that SINA will increase the exchange of information in the Region by putting more people in touch with each other and with existing sources of information. For example, there are a number of institutions already which have information on self-help settlements projects, including:

The Network should put community development and other human settlements workers in various organizations and countries in the Region in touch with these sources and with each other. Although the first members are from a few countries in the East and Southern parts of Africa, it is expected that the Network will grow to include others. It will also be a way for people to promote and conduct future Workshops.

It is intended to collect a list of documents, audiovisual materials and other types of information available and circulate it to Network members. The first newsletter will consist of a -list of the membership as well as some items of news, requests and suggestions. The Network entry form is reprinted here and can be detached from the centre page and used to join SINA. This publication will also be sent free to the first Network members thanks to UN assistance. Further copies can be obtained by writing in and paying a small sum for postage,