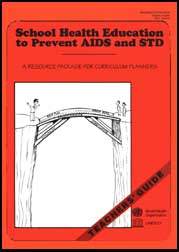 Notice that for every reason for not having sex (in activity 1 and 2 - unit 2), lines have been invented to persuade someone to forget their reasons and say “yes” to sex.

a) Distribute an activity sheet to each student to complete individually, in pairs or in small groups. You may decide to divide the students into two groups so that each group only does 5 lines.

b) Draw 10 question and answer “bubbles” on the board. Discuss an answer to each one and have a student place the best response in the “bubble” (only one activity sheet needed). You would need to put the list of “possible responses” on the blackboard.

c) Divide the class into small groups - assign 5 lines to a group and have them decide on the best response (only one activity sheet per group is needed).

2. Add to the list of possible responses by asking students to suggest “lines” that they have heard.

3. Place the best response for each “line” in the appropriate bubble. There may be more than one good response.

a) The best way to make your response - verbally and non-verbally?

b) Try role-playing 5 or 6 responses by having two people say the “lines” and responses. Talk about the verbal and non-verbal actions of the role-players.

· Be in charge of a small group.
· Draw the “bubbles” on the blackboard (if that method is used).
· Role-play the lines and responses to the lines.