Activities under the Programme have been enthusiastically taken up by the MCV in all the 11 identified slums. Within each slum the communities have been motivated and local community groups organized. These groups interact with the slum residents and prioritise the work to be taken up within each slum according to the perceived needs of the people and the benefits available under the various programmes. The local women folk are actively involved in the community groups and themselves undertake many of the social activities related to education (pre-primary and continuing/ adult education), coaching, vocations training and family welfare. The infrastructure development work is jointly done by the MCV, private contractors and the community with the MCV primarily in a advisory, facilitating and monitoring role.

The following strategy actions have been taken to initiate the process conceived in the UNCHS programme:-

· Households survey of families below the poverty line were done and 55,644 families were enumerated.

· 1871 Resident Community Volunteers were selected as per SJSRY guidelines.

· Five community development societies were formed and were registered. Meetings were convened with banks and targets were given to the banks under USEP & DWCUA.

· A meeting was organised with all the members of Community Development Societies and the various functions they would have to perform under USEP and DWCUA were explained.

· A revolving fund of Rs. 25,000 was sanctioned to one organisation called Visakha Mahila Sewa Sangham and another 23 groups were identified for sanction of revolving funds These are in existence for more than one year as per SJSRY guidelines.

· Under Chief Minister's Empowerment of Youth Programme (CMEY), 275 groups were selected by the district sanction committee.

· Under NSDP an amount of Rs. 7.4 million was allocated to the Municipal Corporation.

· The Government of Andhra Pradesh directed the Municipal Corporation to entrust the following nature of work in slums to the Community Development Societies out of the allocations made for physical amenities.

· Thrift and Credit Societies were formed through St. Ann's Financial Services. Till present the total outreach is 1541 members with about Rs. 490,000 mobilised as savings. 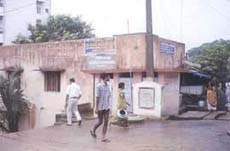 Community centre in a slum in the heart of the city. The facility is a focal point for a variety of activities.

The strategies, as enumerated earlier, were applied to the work in the selected slums. The details of work completed in the various slum areas under the UNCHS Programme are tabulated in Table 4.4. 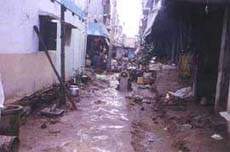 A typical Visakhapatnam slum before the advent of the UNCHS programme. Lack of paving and storm drainage would turn if into a quagmire during heavy rain. 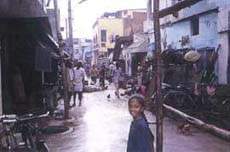 The same slum after the programme. Increased convenience has allowed the community to focus on income generating activities.

It is proposed to take up community infrastructure works such as CC Roads, Drains, and maintenance works in the slum areas by involving the community in the execution and implementation of works to achieve the objectives of community capacity building, environmental sanitation and economic upliftment to that particular community. An amount of Rs. 3.0 million is proposed to be allocated for this purpose.

It is proposed to organise training programmes, work-shops and seminars for different community groups, NGOs and UCD field staff to build their capacities for optimal participation in various slum programmes. The particulars are given below:

In accordance with the concept visualised in the UNCHS programme, the city of Visakhapatnam has worked out a city level investment plan for improvement and upgradation of slum areas in the future. This has been concretised with the full participation of the community organisations who have themselves interfaced with the UCD department and prioritised their requirements in accordance with the felt needs of the communities living within the slums of the city. The plan clearly identifies the individual components as well as the finances required. The Plan is stratified into the following broad components:-