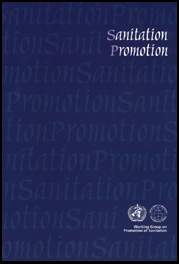 As a means of alleviating increasing poverty in Mexico City's slums, the NGO network ANADEGES (Autonom Descentralismo y GestiA.C.) and its affiliate, CEDICAR (Centro de Investigaci Capacitaciural, A.C.), have perfected an approach of growing vegetables in containers, with domestically-produced organic fertilizers. The key to this cultivation technology is the organic, domestically-produced, liquid fertilizer, urine, and a rich compost produced by worm colonies from ordinary organic kitchen waste. Using these free, readily available organic wastes, together with discarded containers, the project is successfully producing luscious vegetables, and over 5000 urban residents are rediscovering their traditional capacity to cultivate food. Plans for the future include cultivating fruit trees and introducing small backyard animals, such as chickens and rabbits. Dry latrines will also be introduced, especially in areas without sewers.

During the past decade, the “neo-liberal” structural adjustment policies applied in Mexico have provoked a massive migration of the traditional rural poor to urban areas. But yet another major devaluation of the national currency at the end of 1994 has meant that life in the urban and peri-urban areas continues to deteriorate rapidly.

Responding to rapid inflation, high unemployment, and inadequate nutrition, the NGO network ANADEGES launched an urban agricultural project nine years ago. This project, managed by CEDICAR, an ANADEGES affiliate, seeks to help the residents of Mexico City slums develop their capacity to grow their own food organically in small backyards or on patios, balconies, and rooftops. The technology used was selected and adapted to fit the local circumstances, which bore the following profile:

· Peri-urban residents have minimal or no land that can be utilized for conventional kitchen gardens.

· Poor project participants can afford only minimal investment in infrastructure, or none at all.

· Growing containers had to be made of lightweight materials to permit rooftop cultivation.

The project is based on a cultivation technology originally developed in California by Dr Barbara Daniels.2 Vegetables are grown in containers (ideally 18 to 20 litres) stuffed with deciduous tree leaves or grass clippings up to four-fifths of their capacity, and topped with a 3-5 centimetre layer of good soil, into which seeds are planted or seedlings transplanted. To maintain a permanent reservoir of water in the container, a drainage hole is perforated in the side, 5-10 centimetres from the bottom. The exact height of the hole depends upon the type of plant grown. A container thus prepared weighs far less than one filled with regular soil.

The key to this technology is an organic, domestically-produced, liquid fertilizer - urine (referred to as “liquid organic fertilizer,” or LOF) - which is free and abundantly available. Once fermented, LOF is an excellent source of nitrogen for plants, and also contains traces of other nutrients. Urine is collected in a one-quart to one-gallon glass or plastic bottle. A small handful of good soil is added to accelerate the fermentation process. The container is then covered loosely and stored for three weeks at some distance from the living quarters, since it soon develops a strong ammonia odour. After diluting the LOF with water at a ratio of 1:10, the now-odourless liquid can be applied to the plants. (A higher ratio of LOF to water is used during the rainy season; a lower ratio, once the leaves have decayed.) Raw, unfermented, or undiluted urine must never be used.

After initial experimentation demonstrated that the technology worked well, a three-year pilot stage was initiated in 1989, with a group of about 30 families. When it could be seen that these families accepted the use of LOF and the overall results were satisfactory, the project was expanded. In the last six years, approximately 850 families have participated, benefiting 5000 persons in 10 different barrios (neighbourhoods) of Mexico City.

The programme has been tried in different kinds of low-income neighbourhoods. Whereas most programme areas are fully sewered, others, especially poorer squatter settlements, have pit latrines, usually of unsatisfactory design and quality. As a result much of the urination by men has been done in the open. Use of this technology, however, is a good means of dealing with this potential public health problem. More-over, urine diversion, collection, and use as a fertilizer has been successful because of the perceived economic and nutritional benefits to the families involved.

The project is in the process of establishing autonomous resource centres to continue to support urban gardening in each of the communities, thus permitting ANADEGES to expand into new areas.

The results of initial trials can be summarized as follows:

· LOF was an excellent source of nitrogen, readily absorbed by the plant and essential for leaf growth.

· Plants grew more rapidly, larger, and healthier than those grown with conventional agricultural techniques - and less water was needed.

· There was a deficiency of phosphorus and potassium in the fertilizers, which inhibited fruiting.

· Thus a need for testing for minor nutrients was identified.

· The initial intense aerobic composting of the leafy material raised temperatures and acted as a hot bed, which helped plants in their early growing stages.

· The resistance of plants to pests and diseases was puzzling. In one instance, tomato plants grew near a tree heavily infested with white flies. Although many of these flew around the plants, rather than attacking, as normally takes place, they simply flew back to the tree without even landing on the leaves. Apparently the process taking place inside the container helped the plants to become not only stronger, but also resistant to pests.

· At the end of a year the composted leaves turned into beautiful, rich soil. Each container produced enough soil to supply the top five-centimetre layer in 10 new containers.

· In areas that are sewered, the programme confers an additional water-saving benefit because urine is not flushed in conventional waterborne toilets. A rough estimate is that a typical six-member family can save about 53 litres per day. (With a totally dry toilet, the water saved could increase to 89 litres per day.) Finally, kitchen refuse is recycled, instead of being added to the mountains of garbage that are being generated by Mexico City.

After the initial trials, the deficiency of phosphorus and potassium was corrected by using synthetic, chemical fertilizers. Nevertheless, for the technology to be really affordable for poor families, a cheap, abundant, and readily available organic source of these elements was needed. Moreover, since the three- to four-month growing cycle of the plants is so short, these two major nutrients had to be available in a form that could be immediately absorbed. Organic materials requiring longer decomposition periods were ruled out.

As is often the case, the solution was found serendipitously. ANADEGES had already begun to experiment with raising red worms (Eisenia foetida). Worm colonies are capable of converting ordinary organic kitchen waste into a rich compost. Their castings, which are produced abundantly and at virtually no cost, provided the readily absorbable phosphorus and potassium that the plants needed. In addition, the worm castings provide necessary minor nutrients which are not supplied by LOF and decaying leaves.

The problem of how to provide adequate space to grow root crops or very wide leafy vegetables was solved by using discarded car tyres as large pots, an idea contributed by a group of Nicaraguan campesinos on a study tour in Mexico. The ANADEGES experimental centre is now testing a prototype machine for cutting and folding used tyres inside-out to form wide-mouth containers which have sufficient room for crops of this type. The use of tyres also recycles another waste product.

Since the programme beneficiaries are mostly very poor families, they could not afford to pay for the full cost of setting up the required infrastructure in each of the community resource centres. Consequently, some financial support has been received from the St. Nikolaus Foundation in Sweden, GATE-ISAT in Germany, Caritas Sweden, the Swedish Government, and the Demos Foundation in Mexico. In addition, a chain of Mexico City supermarkets has donated a supply of discarded containers. Financial support has recently also been forthcoming from the Mexican Government. The programme's ultimate goal is to become self-financing, rather than to require a permanent subsidy.

ANADEGES sells a kit to each family that includes 10 containers, 3 tyres turned inside out, a wide variety of plant seedlings, and a kilo of worms. Although the full value of the kit is approximately US$ 35 ($270.00 Mexican pesos), the families are required to pay only about 20 per cent of the value in cash. The balance is covered by a loan from a revolving fund. Thus the families can begin to benefit from their garden after paying a very small down payment. Fed on kitchen scraps, the worms reproduce quickly. After only a few months, two kilos of worms, worth more than US$ 32 ($250 pesos), are returned to ANADEGES, thus paying off the loan with interest to the revolving fund.

Lessons learned for promotion and implementation

· Initially, mostly women are interested in container vegetable gardening, but eventually the whole family becomes involved. Gardening is always a community activity and children enjoy it and benefit the most.

· LOF was readily accepted, as long as the decision was reached after discussion and medical assurance given that LOF is harmless when properly fermented.

· People need to be adequately motivated to tend their vegetable gardens consistently. Motivating factors include: improved nutrition; economic savings; a hobby for the whole family; healthy, fresh organic food; revival of agricultural skills - most elders come from rural communities; closer contact with nature; increased independence from government assistance; ecological concerns: recycling of garbage and containers; ornamental plants; relaxation from urban stress; and friendship with others who are also raising plants.

· With appropriate financing mechanisms, families were willing to pay the actual cost of the kit. Produce harvested during the first year is usually at least equivalent to the cash down payment, thus fully recuperating initial costs.

· Women eventually requested ornamental flowers, in addition to vegetables. These were readily provided by the project.

· It is important to work through organized community groups, so the implementing agency does not need to take responsibility for organizing people and promoting the project from scratch.

· Communities selected for this type of programme should have relative social stability, to ensure that people have enough time and energy to dedicate to their gardens. 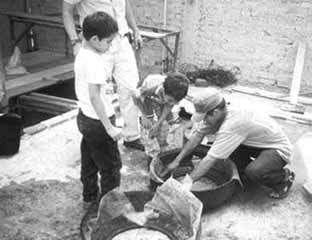 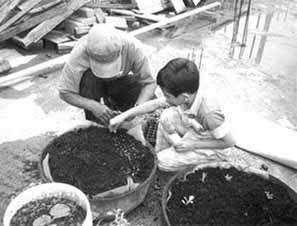 · To expand the project to include approximately 1200 families by the end of 1997.

· To seek additional external financing and government support for developing various aspects of the project, including introducing dry, urine-diverting toilets, and the reuse of tyres as wide-mouth containers (which would also help to address a staggering ecological problem in Mexico City - the virtual mountains of used tyres).

· To work more effectively with the scientific community to encourage more research in to this new horticultural technology to improve sanitation and save water in urban environments.