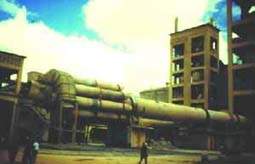 Tanzania: Incineration in cement kilns is one method of disposal in developing countries.

One basic principle of disposal is that obsolete pesticides must be treated in a manner to minimize the risk for human health and the environment. In developing countries, the traditional solution is to ship the pesticides back to an industrialized country for disposal in a dedicated high-temperature incinerator.

Even proponents of the “Return to Sender” principle do not deny the approach’s obvious drawbacks. Any such transport always involves considerable risk for the environment. Naturally, the cost also increases, since such activities are time-consuming and accordingly expensive. Moreover, the transboundary movement of hazardous waste is rendered particularly toilsome and expensive by international agreements and conventions. Among the governments of developing countries, the return-to-sender philosophy also tends to inspire the belief that the countries themselves are not really at fault.

There are therefore a number of reasons to consider alternative strategies. As such, the search for other options has been a central concern of GTZ’s Pesticide Disposal Project from the very beginning.

In principle, the various techniques for disposing of highly toxic chemicals can be assigned to three different groups: thermal, physicochemical and biological.

Incineration also produces new compounds; particularly in the case of incomplete combustion, the reaction products can be even more toxic than the original substances were.

Problem candidates include organochlorine compounds, due to the possible formation of dibenzodiox-ins and dibenzofuranes. Thermal methods are also only conditionally suitable for application to pesticides containing heavy metals or mercury.

A good incinerator employing multichamber furnaces can destroy 99.9999% of the chemicals at temperatures in excess of 1,200°C, with a sojourn time of several seconds. Such facilities are equipped with efficient stack-gas scrubbing systems and filters with the capacity to hold back such highly toxic compounds as dioxins. However, such facilities are only found in a few western countries, because they are very expensive to build and operate. For example, it costs about US $ 1 per kg to incinerate dieldrin, and that does not include the cost of transportation or packaging.

Clearly, on-the-spot incineration in the country concerned would be preferable to shipping the waste overseas. Disregarding certain safety issues, it would also be much more economical. Consequently, as an alternative to large, stationary combustion plants, the use of mobile incinerators has become a popular topic of discussion. They, too, are expensive, especially if they are equipped with appropriate means of flue/stack gas cleansing. Moreover, they cannot be used without hesitation for all substance categories. Only a few semi-mobile prototype incinerators have been built to date, and they have not yet found use on a large scale. 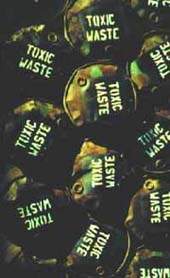 Mozambique: The quantity and chemistry of the pesticides must be established.

Industry employs, to some extent, so-called Michaelis kilns/furnaces in developing countries, but such furnaces are unsuitable for use in the incineration of plant-protectant formulations. Until now, they have only been used for moderately contaminated packages and, from time to time, contaminated soil.

The world is dotted with cement factories, including many located in developing countries. Clinker, a cement aggregate, is obtained in large rotary kilns at temperatures up to 1,450°C. Liquid waste can be injected directly into the flame via the oil lance for combustion under optimized conditions - meaning temperatures beyond 1,850°C. The duration of high-temperature exposure exceeds ten seconds. The alkaline environment neutralizes the acidic gases resulting from the combustion process. The ash is integrated into the cement clinker.

For both industry and developing countries, empirical data and the results of systematic analyses are available regarding the incineration of highly toxic waste in cement kilns. This approach offers ideal conditions for the disposal of problem waste and is particularly well-suited for application to liquid waste. The results are comparable to those of a high-temperature incinerating plant, though the necessary conversion work is minor in scale and accordingly inexpensive.

Chemical and physical methods are of limited use for disposing of pesticides. Basically, such techniques and processes are designed to alter the chemical and physical properties of the toxic waste such as to obtain less hazardous or even completely safe products. That, however, entails a quantitative increase as a significant drawback (among others): The descendants, i.e., the reaction products, also require disposal, e.g., by landfilling. Thus, such techniques are only useful for small quantities of toxic chemicals.

Chemically speaking, hydrolysis is the term used to denote the decomposition of organic compounds by interaction with water. If the water is replaced with a strongly alkaline substance - with sodium hydroxide, for example - hydrolysis easily destroys organophosphorus compounds and carbamates. Of course, the reaction products often turn out to be equally hazardous and also have to be properly disposed of. This approach, too, usually involves a volumetric increase and, hence, is more suitable for such small-volume applications as the disposal of cleaning water used for scrubbing the floors and walls of a contaminated store building. Finally, hydrolysis is potentially hazardous and therefore requires experienced personnel. 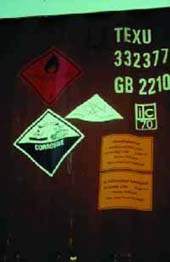 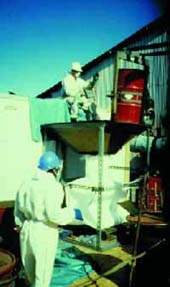 Mozambique: Packing contaminated soil for transport to the disposal facility.

Solidification is an environmentally sound means of binding contaminated solids for subsequent disposal. For example, slightly to moderately polluted soil can be immobilized in this way. The contaminated solids are incorporated into special cements, silicates or polymers in order to bond their highly toxic chemical contents. First, though, it must be assured that the toxicants will not be washed out. Again, the method involves a gain in volume, so while it may be a good choice for the final deposition of pesticide-polluted soil, it is only conditionally suitable for the pesticides themselves.

There are numerous biological methods of decontaminating slightly polluted soil. One approach is to mix pesticide-contaminated soil with specially selected microorganisms and enzymes in a bioreactor. Under ideally controlled conditions, the microorganisms become established in the soil and multiply by feeding on the contaminants, most notably phosphoric esters. To enable specification of suitable working conditions, all such decontamination processes must be preceded by extensive trials designed to isolate precisely the microorganisms that best fit the pollutant in question. Practical tests have shown this technique to be a simple, low-cost method of detoxifying soil - as long as the soil has only been contaminated with either a single pesticide or several pesticides belonging to the same group of active ingredients. If, however, several pesticides with different active ingredients are involved, this form of decontamination is extremely difficult, often even impossible.

The question of when to use which technique always calls for a case-by-case decision. With but one exception, all disposal projects completed to date have involved returning the waste to the country of origin - according to the return-to-sender principle. The only successful local measure was the one in which GTZ incinerated DNOC at a cement factory in Tanzania.

While all other methods touched upon here are feasible in theory, the concrete-case decision to date has always been to dispose of the waste in a dedicated high-temperature incinerating plant. Indeed, that is still the safest, most cost-effective route to take, even considering the risks involved in shipping the waste back to Europe.

Tanzania: The waste introduction system is a mobile unit developed for the disposal of liquid chemicals. (1)

Tanzania: The waste introduction system is a mobile unit developed for the disposal of liquid chemicals. (2)

The biological, chemical and physical techniques tend not to have what it takes for complete and ultimate disposal. Nonetheless, even in developing countries, they can be useful in preparing baseline pollution for incineration or deposition. The potential advantages would include, for example, reduction of the waste volume and/or of the environmental risk.

Despite the fact that incineration is today’s disposal technique of choice, landfills are still needed. The stack gases pass through several stages of purification in which the pollutants of combustion are filtered out. Also, the process produces slag that has to be disposed of in like manner as the filter dust. At least the volume of the slag and dust is much smaller than that of the original substances.

Monetary appraisal of the options must consider the fact that many pesticides have a high heating value. That, of course, can be beneficial in that it reduces the amount of primary energy required from other sources. This applies to stationary facilities in which, say, electricity can be generated. On the other hand, if disposal is effected via industrial production processes, the problem chemicals can even help reduce expenditures on primary energy for the burners. Pertinent experience with cement factories is well-documented.

The cement industry, however, is not always receptive. Those responsible may fear a loss of image even more than a loss of product quality. In developing countries, too, there is public concern about the incineration of toxic waste, and this is a point that planners should not overlook when weighing their options.