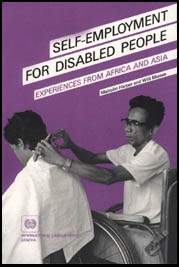 This form of ostracism or exclusion from society may, however, be more than outweighed by the sympathy which many people feel for the disabled. Some may avoid them but others may give them preference when making buying decisions, allocating space or giving licences in the same way that some firms give special preference to disabled employees. Many disabled people, and particularly those who are of the type to want to become self-employed, might be reluctant to accept this element of charity or support, but it has to be accepted like any other fact and it may in some cases make all the difference between failure and success.

There are a number of other positive factors which may make it easier rather than harder for some disabled people to survive in their own businesses. Entrepreneurship is frequently associated with the will to overcome the state of “social marginality”; people who are in some way excluded from society often derive from this the motivation to take the risky and original initiative of starting their own enterprise. This may be because they have no alternative.

One case in point may be refugees, who are perhaps the most obviously marginalised group. They usually arrive in their host country with little more than the clothes they stand up in, having often suffered physically and psychologically during their flight from their own country. Yet in spite of these difficulties, or perhaps because of them, refugees have, through self-employment, become prosperous members of their new countries and have often made a major contribution to their economic development. 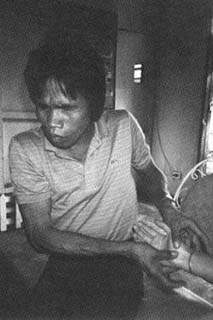 A blind masseur working in the Philippines

It is often the psychological condition of disabled people that makes them particularly likely to do well and persevere in self-employment, for if this is successful, it is also a particularly effective way of establishing somebody's confidence and of achieving genuine rehabilitation not only of the body but also of the spirit.

Disability can also be a stimulus for independent problem-solving and innovation. Disabled children often develop new and effective ways of moving around, communicating or otherwise overcoming their problems. Nobody in the family or the community has been faced with the same problem before. The experience of facing and coping with difficulties which are unfamiliar can be a valuable, if onerous, form of personal development. Entrepreneurs have been defined as “people who put things together in new ways”. This is exactly what disabled people have to do.

In a more direct, physical sense, people who have lost the use of one faculty, or have never possessed it, are more likely to be able to concentrate single-mindedly on a task which needs the faculties that they do possess than those who possess other faculties which are not being used and are thus likely to be a source of distraction. Massage is perhaps the most obvious example; blind masseurs are well known for their skill, and there are many examples of blind people who are able to succeed partly because they can transmit all their skill and concentration through their fingers rather than being disturbed by sight, which is fundamentally unnecessary for massage.

Deaf people develop their own ways of keeping company with themselves without the distraction of conversation; if their business is of a kind where they do not regularly have to speak to other people or where such contact can be facilitated as necessary by outsiders, they may be particularly effective because of their ability to concentrate and to avoid distractions.