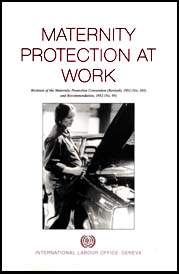 1 Data used for the figures in this chapter were taken from ILO, Bureau of Labour Statistics: Economically active population, 1950-2010, fourth edition (Geneva, December 1996).

10 These and other rights are included in Article 11 of the Convention on the Elimination of All Forms of Discrimination against Women. As of 25 March 1997, 97 countries have signed and 156 have ratified or acceded to this Convention.

12 The Beijing Declaration and Platform for Action included as strategic objective P.5 the elimination of occupational segregation and all forms of employment discrimination. Paragraph 178(c) encourages member States of the United Nations to “enact and enforce laws and develop workplace policies against gender discrimination in the labour market,... in hiring and promotion, and in the extension of employment benefits and social security, as well as regarding discriminatory working conditions and sexual harassment”. In addition, “mechanisms should be developed for the regular review and monitoring of such laws”.

13 Programme of Action adopted at the International Conference on Population and Development (Cairo. 5-13 September 1994), para. 4.4(f).

14 Report presented to the Federal Senate by a Joint Parliamentary Committee of Investigation on the Incidence of Massive Sterilization of Brazilian Women, cited in ILO: Report of the Committee of Experts on the Application of Conventions and Recommendations, Report III (Part 4A), International Labour Conference, 80th Session, 1993, p. 321.

15 Act No. 9029 to prohibit the requirement of a certificate of pregnancy or sterilization and other discriminatory practices, for the purposes of admission to work or maintenance of the legal employment relationship, dated 13 April 1995 (Dio Oficial, No. 73. 17 April 1995, p. 1).

16 Ministry of Labour and Social Security Resolution No. 3716 restricting the requirement of a pregnancy test for obtaining employment in both the private and public sectors to employment or occupations where pregnancies might be at risk, dated 3 November 1994. Committee of Experts on the Application of Conventions and Recommendations: “Individual observation concerning the Discrimination (Employment and Occupation) Convention, 1958 (No. Ill),” in ILOLEX 1997 database (Geneva, ILO, February 1995).

18 See ILO: Protection of workers’ personal data: An ILO code of practice (Geneva, 1997) which states that “An employer should not collect personal data concerning a worker’s sex life” (para. 6.5) and that “medical personal data should not be collected except in conformity with national legislation” (para. 6.7). If a worker is asked questions inconsistent with these principles and the worker gives an inaccurate or incomplete answer, the worker should not be subject to termination of the employment relationship or other disciplinary measure (para. 6.8). In so doing, “the code shares the view of many national courts that, especially in connection with hiring procedures, workers are justified in refusing to answer questions that are incompatible with the code” (para. 6.8).

20 The Termination of Employment Convention, 1982 (No. 158), specifies in Article 5 that pregnancy shall not constitute a valid reason for termination.

22 ILO: Report of the Committee of Experts on the Application of Conventions and Recommendations, Report III (Part 4A), International Labour Conference, 80th Session (Geneva. 1993), pp. 366-367.

23 Information provided to the ILO by the Ministry of Labour and Social Development of the Russian Federation, March 1997.

24 The Beijing Platform of Action calls for the elimination of “discriminatory practices by employers on the basis of women’s reproductive roles and functions”, paragraph 178(d).

26 ILO: Breaking through the glass ceiling: Women in management (Geneva, 1997).