Objectives of this guide

We live at a time when issues of major concern to large numbers of people on the earth's surface get on the global agenda for action. The electronic media have facilitated this process of globalisation. For the disabled people to put their cause on the world's conscience they have to compete (or join forces) with other causes - such as those of women, the environment, human rights, and global poverty.

Ours, primarily, is but a modest, and practical objective. We want to look at the terrain on which disabled people live and struggle. We would like to discuss, for example, if the best strategy for people with disabilities is to demand special treatment for themselves on account of their disability, or to join the mainstream of economic life and compete with the able bodied people. These are the kinds of issues we would like to examine. What does the economic landscape look like when the PWDs start Income Generating Projects (IGPs)? How do they go about planning their projects? What are the resources which they can draw upon... and the challenges? How do they lobby for change? What are the advantages of networking? And so on.

This guide is even more modest than its title would suggest. A "guide," after all, is only a guide; it is not an answer to problems. It is rather like a route map of a complex, spontaneously grown township whose streets and corners are really known only to the people who live there. It shows the general direction of the journey ahead. It does not say what you will find at the end of your journey. 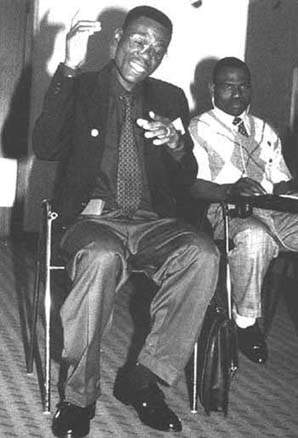 Thomas Mouandza, a member of Young Deaf Handcrafted Furniture Makers in the Congo making a point in sign language. (Photo by Marla Feldman)

There is no substitute for concrete action based on a concrete situation.

Therefore, this "Guide" should not be confused with a technical manual on IGPs. There are many of these around. Rather, it is an exploration of the principles which should guide action. For example, we suggest in this guide that "as a matter of principle," it is better to exhaust all local resources before turning to donor funding; that, as a matter of principle, projects that empower the disabled people are preferred to welfare oriented projects. The Guide goes on to discuss ways in which the PWDs can empower themselves in the various environments in which they live.

There may be more than one path to the destination. Circumstances differ.

Personalities matter. Everybody cannot follow the same path. When ducks are cold, they enter the water. When chickens are cold, they roost in the trees. It is the same with people. Some are rich, some poor. Some are disabled in one way, others in another way. No useful strategy is eternal, its path carved out in stone. We innovate as we go along. It is in this spirit of adventure that we embark on this exciting journey.

But, to be honest, the objective of the guide is not all that modest. One of its objectives is to try to influence events and the general direction in which policies that affect the lives of people with disabilities are going. It's not all sewn up; PWDs have space to influence decisions - within Governments, NGOs, international organisations and donor agencies.

These, then, are the objectives of this guide.

Who may use the guide

There are several categories of possible readership. As indicated earlier, this book is not strictly a "manual," and yet, there is information, especially on matters related to building economic self-reliance (Section II of the book), that can be useful to the Persons With Disabilities engaged in income generating projects. Wherever relevant, each chapter, therefore, ends with 'Action Guidelines" for Persons with Disability.

However, the book is aimed at a broader audience. The main argument of the book supports a strategy of self-empowerment of the PWDs. But the PWDs cannot advance this strategy without allies and a support base in the families and communities in which they live. Hence, community leaders may also find the book a useful source of information and principles by which to guide their action.

A third category of readership includes the professionals engaged in disability rehabilitation work. The contribution of professionals is recognised, but in general, the guide takes a critical view on isolating professional work from the overall social context, and advocates an approach to their work that is empowering of the PWDs rather than one that disempowers them.

A fourth category of readership may be found within those departments of Government that deal With PWDs. They may be spread among different Ministries of Government, both at the Central and Local levels. Hence, where relevant, the chapters end with "Action Guidelines" which they might find useful. A fifth category of readers are the Non-Governmental Organisations (NGOs) engaged in their various functional interaction with PWDs.

The sixth category of readers who might find the guide useful are organisations within the UN system (such as the ILO, WHO, UNICEF and UNDP) and inter-governmental organisations such as the OAU. And the seventh category of readers who would find some sections of the guide useful (e.g. those dealing with advocacy and networking) are the international NGOs representing or relating with PWDs, such as the Disabled Peoples' International, Rehabilitation International, the World Blind Union and the World Federation of the Deaf

With such a broad audience, obviously not everything in the book is of relevance to everybody. In other words, the book can be read in parts. However, for a certain kind of readership it may be useful to read through the entire document because there is a certain sequential logic that connects chapter one through chapter ten. There is an argument built as the chapters unfold. Indeed, readers must be warned that they might find certain positions in the book controversial, even argumentative. This is deliberate. It is to foster debate. There is no human progress without debate. Past knowledge must be challenged by new ideas, new ways of looking at reality, new visions.

This, and the fact that the guide tries to provide for a broad readership, has inevitably affected the language and "tone" of the book. Clearly, the document could not linguistically be reduced to a "minimum common denominator" to the level of the most marginalised among the PWDs. The Entebbe Workshop participants came from varied backgrounds, but as Nelson Isiko was to point out, the very poor were not there. The language of discourse was, at times, conceptually very high. This guide has tried to simplify some of these concepts, but it has retained the conceptual richness of the discussion. Concepts are important tools for debate, and the PWDs would find some of the language used in the book a useful means of dialogue when discussing matters of concern to them with those who make and administer government and inter-governmental policies. 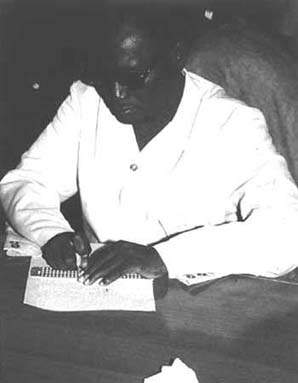 Debate and discussion must continue

Finally, debate and discussion must continue. There are no final and absolute truths. Indeed, that is where the professionals have sometimes made serious mistakes. All rigidities must banish in the fresh light of discussion. It is in this spirit that each chapter ends with a few questions arising from the text. These, and other questions, must continue to agitate the minds of both the practitioners and the PWDs themselves.