In a contracting wage market, the only real option open to most people (and not just the PWDs) is self-employment (the third option in the above chart). But let us first talk about the other two.

Why the subsidy? is the first question that comes to the fore. The answer is that it is part of "affirmative action" which we talked about in Chapter 3. It is a component of policy that tries to equalise conditions which otherwise would be discriminatory against certain groups of people, in this case PWDs.

There are two kinds of subsidized or sheltered employment:

1. The first kind is one where a group of PWDs (usually with the same disability) are enabled to set up a business or a manufacturing or service enterprise, and their costs are partly met out of a grant. The grant could come from either the government or from a non-government organisation (NGO) or a donor.

2. The other kind of subsidy takes the form of the state "topping up" the wages (or salaries) of PWDs who are employed by mainstream enterprises. The usual argument is to compensate the employer for the presumed reduced productivity of a person with disability in comparison to his/her colleagues. 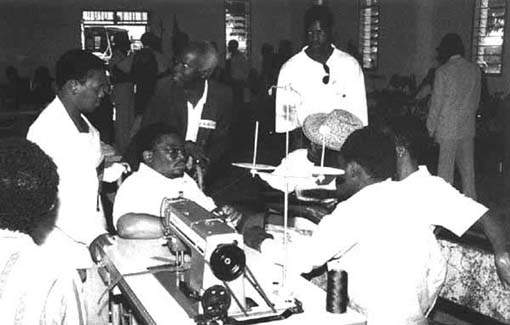 Of course, the subsidy could become counterproductive if it becomes a disincentive to work. Also, there are, of course, practical difficulties about the amount of subsidy and its duration.

Furthermore, one might ask if the subsidy is not tantamount to charity, or welfare, against which we had earlier argued. Not necessarily. There may be cases where such ventures are set up purely as extensions of welfare programmes. But even here, insofar as people are actually engaged in some productive activity that adds value to the economy, as well as value to the people's sense of self-esteem, it changes its character from being "passively welfarist" to being "productively welfarist." It is not the best option, but under certain circumstances, and provided it is not done with a patronising and dehumanising spirit, it is a legitimate way of creating employment for the PWDs.

Also, let it be understood that there is no economy in the world that does not use some or other forms of subsidy to support certain groups of people (the best known examples being the farmers in France and the United States). 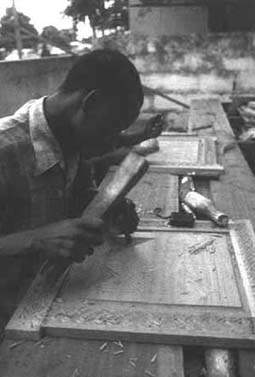 A member of the Young Deaf Handcrafted furniture makers sculpting a tabletop. (Photo by Christine Fowles)

Whatever the merits of subsized employment, its real limitation is that this method of generating employment cannot go very far. It cannot create mass employment. There are financial limits to what the government or NGOs can do.

This is an option which seeks neither a subsidy nor special treatment. The disabled person offers himself or herself for a job, or a profession, entirely on merit. What he/she is up against, however, is the attitude of society that discounts the merit on account of the disability without even putting to test his or her competence.

At the Entebbe Workshop, the participants made a "role play" to test out what barriers and obstacles existed in the employment of persons with disabilities. It came out that, generally, employers and placement officers felt uncomfortable even whilst interviewing people with disabilities. Often the disability became more of an issue than the applicant's qualifications. And some of the worst stereotype attitudes surfaced during the interviews.

However, it was also found that once a placement officer is educated about disability, and his/her prejudices removed, s(he) could even get enthusiastic about offering a job to somebody with disability. The challenge, therefore, is how to educate those in responsible positions to hire PWDs. Like everything else, this requires massive investment in information gathering, dissemination, awareness raising workshops, and radio and television programmes.

We come now to the third option, one that is no less challenging, but that is about the only one left in a world where paid employment is fast shrinking.

These are economic activities of PWDs either in groups and cooperatives or as individuals. The distinction between a "group" and a "cooperative" is only in its formation and status. A cooperative is normally registered, has a constitution that regulates its function, and is usually supervised, or monitored, by some organ of the state. A "group" Is a more informal structure. Cooperatives can exist in both capitalist and socialist-oriented economies.

Before we go any further, there is one issue we must clear. We are here definitely talking about genuine self-reliant efforts, not those that are for ever and ever dependent on donor funding.

Whilst vast numbers of informal activities (usually by the poor, marginalised sections of society) tend to find their own means of raising money for their "enterprises," there is a tendency, generally, for those who describe themselves as involved in "Income Generating Projects" to go on soliciting funds from some donor or another. How, one might ask, are they then different from "subsidized enterprises"? To be sure, they are then no different. They must then fall in the first option analyzed earlier.

To a point, however, if such IGPs solicit only "initial" funds, or start-up capital, since this is one of the most serious constraints on IGPs, then an approach to a donor is justified. The more so, if the money is taken as a loan rather than as a grant. In the long run, however, they have to become fully self-reliant to earn the title of a legitimate mainstream business.

The Entebbe Workshop spent a lot of time on issues related to these kinds of activities - i.e. how PWDs might become economically self-supporting. For this reason we shall devote the next four chapters looking in some detail into some of the problem areas, and the practical ways in which these issues might be addressed. The rest of this chapter will look at some preliminary issues relating to IGPs.