Some case studies of projects run by PWDs

We give below a brief account of projects run by PWDs. These were presented at the Entebbe Workshop by the participants. Limitation of space forces us to give only short descriptions of a few examples. Since almost all the organisations that participated in the Workshop were those that had received assistance from either the ADF or the ILO or both, it is not possible to give examples of financially self-reliant organisations such as the tontines or Biika Weguze referred to earlier. However, in one case, the Uganda National Association of the Blind, which has been in existence for 24 years, received donor funding only in the last two years. [Indeed, what impact this new development has made on the organisation - negative or positive - is an open question]. This is not to say that donor funding is not important. It can sometimes be quite critical. But, above all, the examples show that it is the spirit of the people which is their primary resource.

This institution in Zimbabwe receives psychiatric patients after they have been discharged from hospitals and before they go to their communities or homes. In this project, the municipality offered land to the Centre. The government pays staff salaries, and 100 Zimbabwe dollars as per capita grant per individual. The African Development Foundation gave an initial grant of Z$18,000. Tariro Centre grows vegetables and has a poultry project of 1,500 chickens. They have saved money which they have used to buy cattle and to cultivate another piece of land. "The project is now self-sustaining," the delegate concluded. "Given the chance, we can mobilise resources locally and sustain ourselves; we started in 1990, and the project is still going on." A re settlement center for persons ready to leave Tariro has been established outside Harare at Beatrice. There, former patients are conducting their own agricultural activities by growing vegetables, raising chickens and cows and getting settled back into community life.

The Malian Association for The Prevention of Mental Deficiencies in Children is based in Bamako and was created in 1984 to provide diagnostic and treatment services for youth and support for their families. The grinder and huller project intends to train twelve mentally retarded youth and six family members to operate the mills in six communities in Bamako. From locally gown cotton, Amaldeme is also Producing clothing that is sold to sustain the Association's projects. The projects are designed to engage youth in meaningful activities and to demonstrate to the community at large that the mentally retarded can contribute to family and society.

The Association has existed for 24 years. There are about 500,000 blind or visually impaired people in Uganda. The initial 22 years of UNAB were based entirely on voluntary work by the members. Donor funding came in the last two years only. The Association identified skills among its members, tapped and utilised them. It has 23 branches. In each branch they have a different system according to its specific situation.

In Gulu, for example, they got land on which they cultivate vegetables. They have set aside three days every week to work on the common garden. In Luwero they have a bricks moulding project which has kept them going. In Jinja a group came together to set up a training centre.

In another group, sustainability has been maintained out of payment of membership fees; furthermore, each member has contributed two chickens which were put together as a group project. The eggs and chicken are sold to raise money. "So resources are not only money," concluded the representative of UNAB, "but includes people, items, etc. that are used to sustain a group." 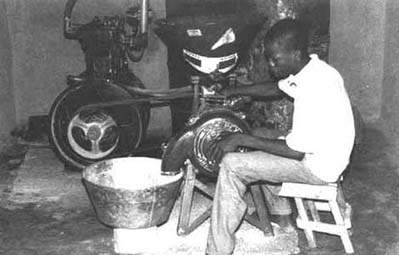 Ousmane Traore of the Amaldeme project working at the grain mill. (Photo by R.J. Benn)

The experience from Ghana was that the community with PWDs undertook to cultivate beans but had no money to buy the seeds. So they went to a company which gave them the seeds With an agreement that after harvesting, they would return double the amount of beans given. The group did so, and went on to produce more beans.

In another project, a committee went to the faculty of agriculture at the University of Science and Technology to seek advice on how to undertake a fish pond project. After the project had taken off successfully and generated some income, they were able to pay for the consultancy fees to the university. Another example was a maize project. People went to the rural bank and obtained a loan. After harvesting they paid back even though they had to double the amount.

All this was organised by the local committees and the resources raised locally.

The NCDPZ was set up as an alternative to the charity model. Now most of their groups are self-sustaining. One group owns a supermarket. The initial funds were received from an outside do nor. All but one of the members are PWDs. Another group has a small catering project, where they sell beer and minerals. These 5 disabled persons have been able to get above the poverty line. Another group acquired a piece of land where vegetables are grown for sale and another piece turned into a commercial car park with about 50 cars a day. They charge a small amount to leave your car there. 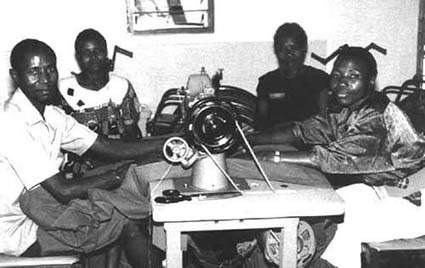 The challenge of unemployment forced a group of disabled youth to organise themselves. With donor funding and a "stock" of local talent and skills, 58 of them set out in 1986 to make products made of canvas -including tents, truck covers, full camp gear, hospital bedcovers, school bags and safari bags. Owing to the nature of the work involved, the membership of the association is mainly for the physically impaired with 60:40 as the ratio between men and women. "We used to look for jobs before," the delegate explained, "but now we are in a position to give Jobs. The community around us is changing its attitude towards the disabled people and are offering to become partners in business."

This is a project of the Union for Training Production and Insertion of Handicapped (UFPIH). It was started in 1986 with one disabled youth who had skills in book-binding. First he trained some friends in the same trade, and an NGO based in Switzerland for PWDs assisted in the training. 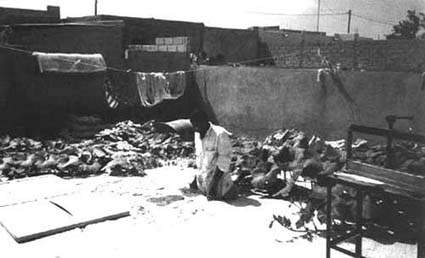 A member of UFPIH preparing pages to be bound. (Photo by UFPIH)

Question from the floor: "Do you have problems about marketing?" Delegate: "Yes, we do. We have the techniques and skills for production but with our mobility difficulties it is a problem transporting the goods and looking for market. So we have decided to commission agents to represent us and our products. These agents go out and market our products and then get a small commission of 10 percent. These agents are not part of the group, but they are good people, they are sincerely interested in our group."

A group of about 40 members, all disabled persons, sell produce like sugar cane. They approached farmers in the local community and got items on loan. After selling, they paid the farmers and kept the difference. From this project, they have mobilised income to sustain their project and have acquired kiosks in town. The group has never received any donor funding but they have a high degree of motivation and independence.