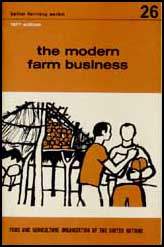 So far, we have seen how the farmer can earn more money.

A farmer tries to earn more money in order to have more money to spend, and in this way to meet his needs. Now we shall see how the farmer can use the money he has earned. We are going to study the farmer's expenses.

A farmer has various kinds of expenses.

Expenses for the family

A farmer may buy clothes for his wife, his children, himself: shorts, dresses, shirts, trousers, shoes. He may buy food: salt, sugar, fish, meat, beer, wine. He may buy furniture for his house: a table, chairs, beds. He may buy things for the kitchen: jars, cooking pots. He may buy articles of everyday use such as soap, paraffin, matches. All these expenses are to satisfy the family's needs; they are called consumption expenses (or family expenses). These expenses make up the family budget. They are not expenses for the farm business.

Expenses for the farm business

There are two chief kinds of expense for the farm business.

· First, there are expenses that come every year.

These are called yearly production costs. They are expenses that have to be met every year, so that the farm can go on working and earn more money.

To get bigger harvests, the farmer must buy each year selected varieties of cotton, or groundnuts, or rice. This expense has to be met each year.

To prevent his plants from becoming diseased, the farmer has to buy pesticides every year to protect cotton or groundnuts, to protect cocoa trees or coffee trees.

To increase the yield of his crops, the farmer has to buy chemical fertilizers every year to apply to the crops that earn money. The farmer must think carefully before deciding to apply fertilizers. He must be sure that all the other farming jobs have been well done,. for example, that sowing was done at the right time, that weeding has been done often enough, that pesticides have been used. Otherwise, it is useless to spend money on fertilizers.

· There are also expenses that do not come- every year.

To make an investment means spending money to increase the farm's productive capacity.

The farmer clears some land and grubs up all the trees. He digs irrigation and drainage ditches to make an irrigated rice field. He makes barrier strips and terraces to protect the soil from erosion. All these undertakings are investment because they increase productive capacity.

The planter who makes new plantations of coffee trees or mango trees also makes an investment.

· Some farmers have enough money at hand to pay the full cost of an investment.

Example: Issa is a good farmer, he has had good harvests for several years; he has not spent any money on useless things. Issa has more than 40 000 francs in reserve. Issa wants to get on. He wants to buy a plough and a pair of oxen. The plough costs 8 000 francs and the oxen 20 000 francs. Issa pays cash for the plough and the oxen. Issa can pay for his investment right away because he has money in reserve; he has made savings.

· But many farmers are not like Issa, they have not got enough money to make an investment. They have to ask for money from banks or credit institutes; they have to borrow money (see Part 4: How a farmer can find the money).

Marcel wants to get on; he wants to buy a plough and a pair of oxen. The plough costs 8 000 francs, the oxen 20 000 francs. But Marcel has no money. He borrows 28 000 francs from the agricultural credit institute.

The institute lends him the money for five years Each year Marcel is to give back 28 000/5 francs = 5 600 francs to repay his loan.

The next paragraph's are difficult. If you do not understand, you are not obliged to read them, you can go straight on to "Part 4: How a farmer can find the money".