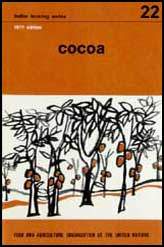 28. When the cocoa trees have been planted, the work is not finished.

The grower still has a lot of work to do to look after his cocoa trees.

A grower who does not look after his plantation properly cannot harvest big pods and will not earn much money.

To look after your plantation properly you must:

· Replace seedlings that have not grown

· Protect the cocoa trees from insects and diseases.

29. Sometimes certain cocoa seedlings do not grow well. They remain small or die.

During the months following the day when you planted your seedlings, you must always look to see whether the cocoa trees are growing well.

If you see diseased or dead cocoa trees, pull them out and burn them, and also those encircling them in case of swollen shoot disease (see paragraph 42). In their place, plant other young cocoa seedlings, from among those that you have kept in the nursery bed or in baskets.

30. Many weeds grow among the cocoa tree rows.

When the cocoa trees are bigger, they cast a lot of shade and so few weeds will grow. It will be enough to weed once a year. When you are cultivating be very careful not to damage the trunk and roots of the cocoa trees.

31. Between the rows of cocoa trees, you should not leave the soil bare.

You should cover the soil either with cut weeds or with palm fronds, if available.

In this way the soil is protected against sun and erosion; it stays moist and cool.

When the weeds rot, they give the soil organic matter.

You can also sow a cover crop, for instance legumes. This will give the soil good protection against sun and erosion.

You can also sow a cover crop

32. The cocoa tree is a tree that develops well. It has a single, straight trunk. A crown of 3 to 5 main branches forms about 1.5 metres above ground level.

33. Sometimes, during the first year, several shoots form on the trunk. Cut off these shoots and leave only the strongest. Sometimes the crown forms too low down, at less than 1 metre above ground level.

A new crown will then form at a good height, and the first crown will stop growing.

Choose a shoot which grows straight up and let it develop

4. Always cut out all dead branches, dry twigs and suckers.

A sucker is a twig that grows upward out of the trunk. Cut off the suckers very close to the trunk.

Always cut out all dead branches

Fertilizers cost a lot of money.

So the grower should use fertilizers only when this will make him earn more money.

36. When you have tended your cocoa trees, when you have hoed the weeds, then you should apply fertilizer.

Spread fertilizer around each cocoa tree, but be careful not to put any on the trunk, the branches or the leaves of the cocoa tree: otherwise the fertilizer will burn the free.

Spread the fertilizer in aring around the trunk at a distance of about 1 metre from it, where most of its small roots are.
Apply fertilizer twice a year: in April and September.

37. It is useless to apply fertilizers In a plantation that Is not well cared for.

If the plantation is not cared for properly, fertilizers do nothing except feed the trunks of the cocoa trees, the suckers and the weeds.

The grower loses his money.

Ask the extension service how much fertilizer to use.

For example, in Ivory Coast:

· on the more sandy soils, along the coast, use compound fertilizer, which contains nitrogen, phosphoric acid and potash: fertilizer formula 13- 10- 15;

· on the more granitic soils of the interior, use another compound fertilizer: formula 12- 15- 18.

The quantities for each tree are as follows:

Protection from insects and diseases

The most dangerous insects are the following:

These insects prick the twigs and pods. At the place where they make a hole, the tree dries out and the sap no longer circulates. Young trees attacked by capsids often die. To control capsids, use Lindane or Aldrin.

The larvae of these insects bore holes in the trunk or branches. You can control borers with DDT or Dieldrin.

The most dangerous diseases that attack cocoa trees are the following:

This is caused by a fungus which chiefly attacks the pods.

If attacked, the pods rot and die.

Control this disease by picking off diseased pods and burning them.

You can prevent the disease from spreading by spraying the sound pods with copper preparations.

This is a very serious disease, which has caused much damage in Ghana.
You will see that the leaves are mottled. Sometimes some twigs become very thick and the tree soon dies. Mealy bugs carried about by ants can transmit the disease from one tree to another.

Control this disease by cutting down diseased trees and leaving them to wither.

Remember that, when a diseased tree has been discovered and cut down, all the trees circling it must be cut down also to avoid the spread of infection.