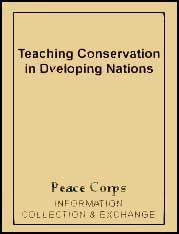 We share our environment with other living things. A balanced and healthy environment should have many different species living together in interdependence. Many species in the world today are in danger of disappearing because their numbers have been reduced_ by hunting, by loss of their habitat, or by an environmental change in their food chain - to where they can no longer reproduce efficiently.

It is of benefit to the total environment to maintain and encourage these endangered species, for when something goes wrong in the natural order, it can affect us all.

For example, jungle cats have become rare in many places. The rats which the cats used to eat have multiplied now that their natural enemies are gone. In their search for food the rats now invade villages, carrying disease to the inhabitants and eating their crops.

An important element in conservation education is awareness. In order for a community to be concerned about the endangered species of the area, people must know something about these species.

A school program to study a local endangered animal could be a very effective way to begin to develop community awareness.

2. Make poster pictures of it to display in the community.

3. Study the food chain of the animal,

4. Identify changes in the local environment which affected the animal's habitat.

5. List as many reasons as you can for the animal's disappearance.

6. Make up guessing games about the endangered animal.

7. Build a battery-powered guessing game to match relationships in the endangered animal's habitat, for example.

8. Invite a wildlife technician to the school or the community center to talk about endangered species.

The International Union for Conservation of Nature and Natural Resources (ICUN) has proposed conservation measures to promote the survival of endangered and threatened species. (Endangered species are close to disappearing; threatened species are likely to become endangered). These measures, called "Action Treatment", are included here in order for you to determine if any would be possible for you to undertake as part of a community conservation program.

(1) To make a brief status survey to determine the status of the species and the current threats to its survival;

(2) To make a longer ecological study to identify the species' requirements, the factors limiting its population growth, and the relationship between the species and local human population;

(3) To ascertain the legal and enforcement situation.

(a) To prompt new legislation;
(b) To improve law enforcement;
(c) To improve the legal situation in any other way

(4) To establish the research station to study the fauna, flora and ecology of the region;

(5) To establish a research foundation possibly within an existing organization (such as a university) which will focus scientific attention on the species concerned;

(6) To create a continuing scientific presence by any other means;

(7) To promote a program of

(a) Captive propagation;
(b) Translocation.

(8) To offer bounties for successful rearing of young (chiefly applicable to birds).

(1) To exert influence by persuading someone of importance to write:

(a) A personal letter;
(b) An official letter.

(2) To send a high level mission to confer with the heads of Governments or Ministers concerned;

(3) To promote a local meeting on the subject;

(4) To promote a resolution or recommendation at a Conference;

(5) To secure recognition in high places by some other means.

(1) To promote a publicity campaign;

(3) To promote a program of long-term education.

(2) To seek financial aid from an individual or organization which may be linked with the species or project;

(3) To get help in kind from industry or commerce;

(4) To obtain the services of people able to give practical help.