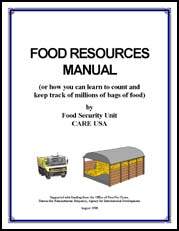 To address the problem of food security, policymakers and project planners have continually looked for ways to get at the root causes of poverty and world hunger, and permit households to have "access. . .at all times to sufficient food and nutrition for a healthy and productive life" (US Agriculture Trade and Development Act, 1990).

Food security is not static. The key to sustained food security is a household's adaptability to change and resiliency to bounce back from shocks that affect household members' abilities to earn income to produce or purchase sufficient food to meet household needs.