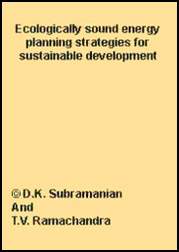 Energy is as important to life as food, clothing and shelter. It provides power for industry, lighting, heating (domestic purpose) and fuel for transport. Our primary needs to sustain life on earth are obtained from the sun. Since the day man invented fire, he invented also an acquired form of energy with its uses. Initially the energy requirement were met mostly from animate sources of energy and to some extent from wood. Therefore all these necessities of daily life were located within walkable distance of everyone. Gradually man learned to harness new sources of energy and use them for cooking food, making implements and for other uses like in transportation. Minor leap started after the evolution of agriculture and with the industrial revolution man's dependence on energy has increased enormously.

The history of man's emergence from the ecological niche appropriate to a medium size omnivorous mammal to his present position as the earth's dominant species is one of increasing skill in harnessing and manipulating energy at each stage of his evolution, has been marked by an extension of his ability to control the natural flows and accumulated energy resources about him.

As technology innovations proceeded at a faster pace to conquer various problems of mechanisation, energy consumption rates also started to gallop. It appears that the modern society has grown without understanding the future nature of its dependence on energy. The complex edifice of industrial civilisation, with its endless catalogue of achievement and conquest of the physical world, has so impressed people that they have failed to see the fragility some of supports received from the environment. Market economies based on value addition treated many energy resources as free resources assuming infinite availability such resources like wood, coal etc. and thus has led to generation of more energy intensive technologies. Exponential growth in population coupled with associated increased use of energy has actually led to crisis situations in resources which we are now facing.

Development has always been an increasing quest of mankind, and this has made the modern man to achieve quality of life he enjoys today. The indiscriminate pursuit of development has led to problems like depletion of natural resources, environmental degradation, wide economic disparities etc (Ramachandra 1993 and Ramachandra et al 1993). This has necessitated the thinking of "Sustainable development". The key features of sustainable energy for development are

Energy strategies for sustainable development should not only be compatible with but also contribute towards development. Distribution of energy sources is to be decentralised to energy end-uses for cooking, supply of drinking water, agriculture, electrification, rural and urban industries creating employment. At present biomass or fuelwood is the most widely used alternate energy source and its use is restricted to domestic and non-commercial purposes (Ravindranath and Ramachandra 1991). Efficient use of bioenergy by converting biomass feed stocks into solid, liquid, gaseous and electric energy carriers, would contribute in improving the quality of life. Use of renewable would go long way in achieving the goal of sustainable development.

Energy is a complex process because it is possible to convert it into different forms, transport it, store it in some form and use it for various end-uses at innumerable number of places (Ramachandra et al 1992, Wilbur 1985, Mortimer 1991 and Kishore et al 1988). The three components of energy system are:

(1) Generation system: Energy resources are converted into a transportable form like electric energy in centralised systems or as gas or steam in a decentralised form,

(2) Transport/Transmission system: Energy system transported from place of availability/generation to places of use.

In the case of decentralised systems, all these three activities may not be present. Energy resource is transported directly to place of use and used in suitable end use device.

Karnataka state extends over an area of 1.92 lakh sq.kms. of the total geographical area of the country. It occupies about 5.84%. The state is situated in the West-Central part of the deccan peninsula of the Indian union and is stretched between 130 3' and 180 45' north latitudes & 740 12' and 780 40' east longitudes. Major portion of Karnataka lies in the elevation range between 450 and 900 metres above the mean sea level. With a population of 4,49,77,201 accounts for 5.4% of the country's population. For administrative purpose, the state has been divided into divisions, districts and taluks. There are 27,024 villages spread over 175 taluks. 69.07% of population resides in rural area (3,10,69,413 persons). Economy of the state is predominantly agriculture based with around 45% state domestic product being accounted by this primary sector (Government of Karnataka 1990).