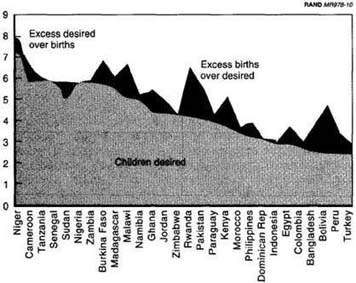 The gap between preferences and actual fertility springs from what demographers label the "unmet need for contraception." Through survey questions that identify women who would prefer to delay or terminate childbearing but who are not using contraception despite the risk of pregnancy,16 demographers estimate that unmet need affects 10 to 40 percent of married women of reproductive age in developing countries. Levels of unmet need (Table 1) are high in high-fertility countries, such as Malawi (36 percent), but are still substantial in relatively advanced regions, such as Latin America, where they range from 12 to 29 percent. For all developing countries, the total with unmet need is estimated at about 150 million women.17

16This excludes those assumed not to be at risk: (1) those protected by postpartum anovulation, the temporary infertility that follows a pregnancy, which can be extended by continued full breastfeeding; and (2) the infecund, identified by not having conceived in five years despite taking no preventive measures, by not having menstruated in six months, or by claiming they could not have a baby or were menopausal.

17According to unpublished tabulations of Demographic and Health Survey data by Shea Rutstein (1997, personal communication). Precise definitions and therefore estimates of unmet need do vary somewhat, but the total of the estimates in Table 1 - 75 million women with unmet need across only 44 developing countries - appears consistent with this.

Unmet need is essentially a conflict between what a woman wants and what she does about it: She wants lower fertility but fails to do what is needed to prevent pregnancy. The reasons couples want smaller families are numerous and generally well-founded, from the financial strain large numbers of children put on households to the strain of continual childbearing on a woman's health and energy. Preferences for small families inevitably increase as societies modernize: Financial pressures grow; the need to educate children becomes more apparent; and the desire for more creature comforts or at least for release from unremitting childbearing begins to seem possible as the media promote alternative lifestyles. At levels of fertility reported in some earlier national surveys (as in Kenya in the 1977-1978 period), women spent the equivalent of six continuous years of their lives pregnant and 23 years caring for children younger than six years old (World Bank, 1993a, p. 9). With the early childbearing typical in some countries, pregnancy can account for more than a quarter of female school dropouts, beginning as young as primary school.18 Controlling their fertility can give women options and a degree of freedom not previously available.

Lower fertility preferences are translated into lower fertility in the long run. Over many years, successive cohorts reduce their fertility to modern low levels in the course of socioeconomic development. But this process is lengthy and not automatic: It took a century in industrial countries and several decades in such countries as South Korea and Thailand. In the process, many couples must cope with larger families than they want and with poorly timed births.

The reasons for this delay are discernible in the obstacles women cite to contraception when they otherwise have good reason to use it. These obstacles are shown in Figure 11, which tabulates the principal reasons respondents give in surveys taken in 13 countries for not using contraception when they want to avoid a birth (Bongaarts and Bruce, 1995). These reasons are grouped for convenience into four categories: poor access, concerns about using contraception, objections to family planning, and other reasons. The most important single reason is lack of knowledge about contraception, its use, or its availability, cited by one-quarter of those with unmet need. The second most important is concern about the health effects of contraception, cited by one-fifth.

Neither obstacle is something most women in developing countries can overcome without help, and poorly educated and impoverished women should not need to rely entirely on the altruism of pharmaceutical firms or private doctors for education about contraception and provision of safe and appropriate methods. Contraception is in fact quite safe. What health risks some methods carry are small relative to the risks of a typical pregnancy. It is estimated that the mortality risk of an unplanned, unwanted pregnancy is 20 times the risk of any modern contraceptive method and 10 times the risk of a properly performed abortion (Ross and Frankenberg, 1993, p. 86). Still, misuse of contraceptives is possible and needs to be minimized by promoting wide knowledge of contraception and ensuring safe and effective services. 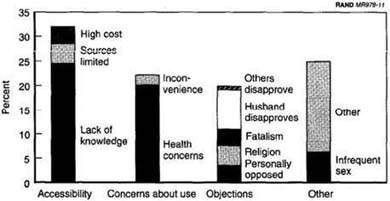 NOTE: "Sources limited" is referred to as "lack of access/difficult to get" in the original study (Bongaarts and Bruce, 1995).

Family planning programs - organized efforts to provide contraception and provide associated reproductive health services - address the two main obstacles to contraceptive use, as well as various others, such as limits on the supply of contraceptives and their cost. The cost, to impoverished couples, can be substantial: The retail price of an annual supply of contraceptive pills exceeds US$l00 in half a dozen developing countries, as does the retail price of an annual supply of condoms. Costs that reach 5 percent of average household income are common, and costs reach 20 percent of income in some sub-Saharan countries (World Bank, 1993a, pp. 33-34). Inadequate supply and high cost are each cited as the main obstacle to contraception by 3-4 percent of women, but these low figures may be misleading. For instance, someone with poor knowledge about contraceptives is unlikely to complain about supply or cost (Ross, 1995). The low salience of these reasons may also reflect program successes in supplying cheap contraceptives at the same time they raise awareness. The proportion of women with an unmet need for contraception who cite lack of knowledge as the main obstacle is sharply lower in countries where education programs are more active. The proportion citing health concerns, on the other hand, is not reduced but rises, suggesting one of the continuing challenges to such programs.19

The other reasons for unmet need are more problematic. Objections to family planning that the woman or others who influence her may have are fairly important, but exactly what these objections are is not clear from the survey evidence. A husband may disapprove, for instance, because he wants more children or because he is concerned about health effects, bothered by the inconvenience, or distrustful of traditional methods.20 Such objections may therefore also reflect informational or access issues or health concerns. Except for a woman's personal opposition to contraception, the objections also appear to be less prominent where programs are active.

20An intensive study in the Philippines confirms the importance of husband's objections but does not reveal the reasons behind them (Casterline, Perez, and Biddlecom, 1997, pp. 183-184).

Family planning programs therefore appear capable of addressing the main obstacles to contraceptive use, potentially helping couples attain their desired family size and, in theory, providing societies with the demographic bonus that comes from reducing fertility. What such programs have actually contributed requires some examination.