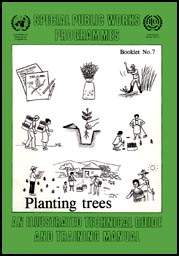 In many areas land is scarce and it is not possible to set aside a plot only for planting trees. In such cases trees can often be planted in ways that do not require a separate plot. Trees may be combined with agricultural crops or grazing, they may form a shelterbelt, or be planted along roads and rivers or around homesteads. The selection of species, spacing and protection are different in these cases from those described for woodlots.

7.1 Trees in crop and grazing land

The most common form of agroforestry is simply to have trees scattered in grazing land or in fields. The trees can supply such useful products as food, fuel, fodder or gum. The trees can also provide shade, improve soil fertility and conserve soil moisture.

Agroforestry trees should have a light crown so that the shade provided is not too great for the agricultural crops. They should tolerate pruning (i.e. the cutting of branches) and regenerate well afterwards (e.g. Grevillea robusta or Cordia species) so that their leaves can be used as fodder and the shading of crops can be controlled. Preferably they should be able to fix nitrogen to improve the soil. The roots should be deep rather than close to the surface. Aggressive species that invade agricultural or growing land with root suckers or abundant regeneration from seed have to be avoided.

Seedlings may be planted or natural regenerated sprouts of desired species can be located and protected. Some simple protection measures for sprouts are shown on the opposite page. Protection of an entire field from grazing for some years will also allow the trees to regenerate naturally. Seedlings may also be planted. The spacing should be wider than in ordinary forestry plantations, maybe 10 x 10 metres.

Trees in crop and grazing land

Good characteristics for trees for agroforestry

When field crops are planted in alleys between hedgerows of trees and shrubs it is called alley cropping. The hedgerows provide fodder, green manure and mulch material. This is rather labour intensive since they have to be kept pruned throughout the cropping season to control shading and competition. Trees for alley cropping should fix nitrogen, coppice very easily after trimming and have leaves that are preferred by livestock or that decompose easily when applied as mulch. On dry sites competition for water may be so strong that alley cropping damages the crop. It should therefore not be practised on such sites.

When intercropping trees and crops, follow in sequence and combine restoration of the soil by trees with agriculture. The land is usually devoted to food growing for some years before trees are planted. Thereafter the agricultural crop is grown together with tree seedlings for some years until the shade from the trees interferes with the growth of the crop or the agricultural crop with the growth of the trees.

Crops between hedgerows of trees and shrubs

Intercropping as a rotation

Shelterbelts or windbreaks are strips of trees and other vegetation that reduce the force of the wind. They are very important in areas with frequent high winds and windblown sand. Often they consist of several rows of shrubs and trees of different heights.

Shelterbelts are most effective if they do not block the wind completely, like a wall, but force it to slow down. If the wind cannot pass through the shelterbelt at all, it will try to pass underneath it or over the obstacle. If it flows over the shelterbelt, it produces turbulence which is harmful for the crops behind the belt. If it goes underneath, the belt acts like a funnel and the wind becomes very strong. Therefore choose large trees for the centre row. On each side of this row plant one or two rows of smaller species. Outside these rows shrubs or other vegetation can be planted to make sure that the wind cannot pass underneath the belt. Plant the trees with close spacing, e.g. 1-2 m apart.

The trees need to be able to stand up to the wind and to have flexible branches and medium dense crowns. The crowns should be long and narrow rather than spreading (the Casuarina species, for example, forms ideal windbreaks). The species should preferably be able to provide by-products. A well chosen mix will not only provide shelter from the wind but will also yield fruits, firewood, etc. If Shelterbelts are planted across grass and cropland where animals are grazing, it will be advantageous to plant thorny shrubs along the edges so that the shelterbelts can provide protection from livestock, like a live fence.

side view one row of shrubs three rows of trees

Land along roads, canals and rivers is often available for planting multipurpose trees and shrubs. When trees are grown individually or with wide spacing, they will grow much faster than in plantations because there is less competition. They can be a significant source of tree products. Trees will also provide shade and stabilize roadsides and river banks. Ownership of the land concerned is not always clearly or visibly defined. Land along the bigger roads, canals and rivers often belongs to the government or local communities. Before planting, ownership of the land, harvesting rights and responsibilities for management and protection have to be clearly defined.

Trees along the road should be planted so that they leave room for the safe passage of people, animals and vehicles. Trees should not be planted on the inside of a curve where they might block the view of oncoming vehicles.

Along waterways it is usually easy to establish trees, unless the banks are steep or rocky. If banks are flooded during the rainy season, the plant should be planted right after the rains to be well established before the next flooding. Species known to grow naturally close to water, and thus tolerating seasonal changes in water level, should be chosen.

To stabilize the banks, a strip of grass should be planted along the water. Further from the water a strip of shrubs and thereafter trees.

No trees on the inside of curves: they block the view!

Trees only on outside of curves: good view

The household compound and public places (school yards etc.) are important areas for tree planting. Trees often add to the comfort, beauty and utility of the place.

It is practical to have trees around the house where they can be protected and tended with ease. Most people are more likely to benefit from a few trees planted in their home garden than from central woodlots or forest plantations. In many countries it is the women who are responsible for homesteads. Trees planted around the homestead might therefore directly benefit the women, a group which is often difficult to reach through tree planting projects.

The choice of species for homesteads and public places must be made by the people who will live in and use the areas. However, fruit trees and multipurpose trees are often preferred. Trees with noxious odours or irritating pollen (for example, the Croton species) should be avoided.