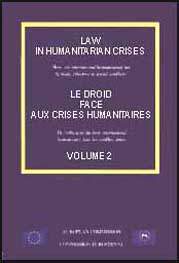 In his Annual Report to the General Assembly of 1991 the Secretary-General of the United Nations, Dr. Boutros Boutros-Ghali made a most interesting and important, though quite often wrongly interpreted, observation on the preferred attitude of the international community towards systematic violations of fundamental human rights by a State. He stated in rather unambiguous terms:

"[i]t is now increasingly felt that the principle of non interference with the essential domestic jurisdiction of States cannot be regarded as a protective barrier behind which human rights could be massively or systematically violated without impunity. The fact, that in diverse situations, the United Nations has not been able to prevent atrocities cannot be cited as an argument, legal or moral, against the necessary corrective action, especially when peace is threatened [...] The case for not impinging on the sovereignty, territorial integrity and political independence of States is by itself indubitably strong. But it would only be weakened if it were to carry the implication that sovereignty, even in this day and age, includes the right of mass slaughter or of launching systematic campaigns of decimation or forced exodus of civilian populations in the name of controlling strife or insurrection ".

This statement goes to the core of an issue which has attracted much scholarly attention over the last 600 years: the doctrine of humanitarian intervention, its (il)legality, scope and contents in international law. Or, in other words, whether and when, and in which situations, is it permitted to use armed force by a State, or group of States, against another State or States, in order to intervene for humanitarian reasons (i.e. in situations of continuing atrocities and when gross violations of fundamental human rights occur), in the internal affairs and domestic jurisdiction of the latter State(s) without the consent of the government(s), thereby knowingly violating the territorial sovereignty and political independence, in order to protect the civilian population of the target State.

The question of the legality and scope of humanitarian intervention, therefore, is in fact a discussion on the relationship and frictions between sovereign equality, territorial integrity, political independence and the prohibition on the use of force on the one hand - generally regarded as fundamental principles of the present world order and the international legal system -, and the requirements and obligations imposed by international law to effectively protect fundamental human rights in situations of extreme and systematic violations, on the other. As such, it concerns questions of international peace and security.

In the post-1945 or UN Charter era, the doctrinal interest was at its height in the seventies and eighties following interventions in, inter alia, the Congo (Belgium and the United Kingdom, 1964), the Dominican Republic (United States, 1965), East Pakistan (India, 1971), East Timor (Indonesia, 1975), Zaire (Belgium, 1978), Grenada (combined forces of six East Caribbean States and the United States, 1983), Panama (United States, 1988), whereas in the first half of the 1990s international lawyers, again, showed an increasing engagement with the topic after the military interventions of the Allied Forces in Iraq and the ensuing actions to protect the Kurds in northern Iraq and the Shiites in the south (establishment of the two no-fly zones; 1991), the intervention in Somalia (1992-1993) and the - still continuing - tragic events in the Former Yugoslavia and Rwanda.

However, as a consequence of the end of the Cold War and the corresponding change of atmosphere in the UN Security Council, the debate at the end of the 1980s and early 1990s has also touched upon a different and, within the context of humanitarian intervention, hitherto unknown and unrelated feature of that concept proper: aspects and features related to what is generally described in doctrine as the concept of "humanitarian assistance".3 The recent practice of the Council has further stimulated this debate (see infra).

During the early years of the 1990s various authors, inspired by an explosion of civil and interstate strife, ethnic and religious violence, and "micronationalism", have introduced new terminology like "intervention for humanitarian purposes ", "intervention on humanitarian grounds", "the law of democratic intervention", or refer to a "droit d'ingnce" or right to humanitarian assistance and "emergency humanitarian protection and assistance", or speak of an "obligation" to provide this assistance, even when the consent of the government of the affected State has not been obtained, when serious and systematic human rights violations take place.

In the words of one prominent commentator those heated debates have only resulted in "unproductive polemics".

The purpose of this contribution is, therefore, to attempt to identify the issues at stake, to determine as far as possible, and necessary, the legal scope and contents of the concepts involved by means of an analytical investigation, with the aim being to develop a conceptual framework within which the underlying concepts - humanitarian intervention and humanitarian assistance - operate and will develop in the future. Only then it is possible to determine the relationship between humanitarian intervention and humanitarian assistance in present-day international law and to make a correct distinction between the two. This is, furthermore, important because different sets of legal and normative principles have to be applied in and result from different situations.

In doing so, this contribution will focus primarily on the contemporary scope and status of humanitarian intervention and assess the nature and scope of humanitarian assistance under present-day international law in the light of these findings.

In this context some preliminary observations must be made with regard to the term "humanitarian assistance" as used in this study.

Most of the confusion and inconsistent, or even incorrect, use of "humanitarian intervention" as a legal concept in relation to "humanitarian assistance", results from situations in which humanitarian operations take place involving the use of armed force and/or in situations of armed conflict (ius in bello).

For this reason, the attempt to develop a practical, clear and transparent conceptual framework is limited to such situations.

It will be argued that the two concepts are of a fundamentally different nature and should therefore not be confused and have, in both theory and state practice, very little in common.

At the same time it is concluded that the doctrine of humanitarian intervention, as it is commonly understood and defined in legal literature and referred to in state practice, is becoming less relevant in international relations as a result of the changes which took place within the framework of the United Nations system after the end of the Cold War and, more specifically, after the adoption of the famous, but often incorrectly understood, "humanitarian" Resolution 688 of 4 April 1991 of the Security Council and its ensuing practice.