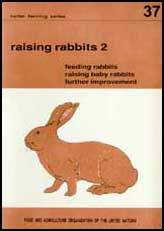 161. So, once your rabbits are old enough (and if they are not sick), you can begin to mate them for the first time.

162. The best time for mating is early in the morning, or in the evening when it is cool.

The best time for mating is in the morning or evening

163. When you mate your rabbits, always put the female into the pen of the male.

Put the female into the pen of the male

164. Watch to see what happens. Usually they will mate quickly. If the male mounts the female and in a short time falls off to one side, mating has taken place.

165. As soon as this has happened, put the female back in her pen and write down the date of mating. This way you will know when to expect the baby rabbits to be born (see Item 171 in this booklet).

Write down the date of mating

166. If the rabbits do not mate after about five minutes, put the female back in her cage and try again the next day.

167. Sometimes when a female rabbit is put into a pen with a male rabbit she will hide in the corner and the male rabbit will not be able to mount her.

168. If this happens, you can help them to mate. To do this, hold the female by the neck with one hand.

169. Then, put the other hand under the female with one finger on each side of her tail and push gently backwards.

170. This will make the female lift her tail so that the male can mount her. The drawings below will show you how to hold a female rabbit for mating.

How to help a female rabbit mate

171. Baby rabbits are usually born about one month after mating. However, they may be born a few days earlier or a few days later.

172. About five or six days before you expect the babies to be born, put one of the nest boxes that you have built (see page 41 in the last booklet) in the pen with the female.

173. Cover the bottom of the box with sawdust or wood chips. This will help to keep the box dry after the baby rabbits are born. Put a little dry grass or hay in the box.

174. The female rabbit will then make a nest in the box to protect the baby rabbits, using some of her fur mixed with the dry grass or hay.

The female rabbit will make a nest

175. The nest box is very important because baby rabbits are weak and helpless when they are born. Baby rabbits have no fur, they cannot see and they cannot walk. So, they must be well protected.

The baby rabbits in the nest

176. Soon after the female rabbit has finished the nest, you can expect the baby rabbits to be born.

177. Stay away from the pen as much as you can during this time and do not bother the female. This is especially true while she is having the babies.

205. You can put as many as six to eight young rabbits in a pen of the size you learned to build in the last booklet.

206. However, it is best to keep all of the young rabbits from the same female rabbit together in the same pen.

207. Once they are in their own pen, you can begin to fatten them to eat or to sell. So, give them as much food as they can eat and plenty of fresh water.

208. Young rabbits are usually big enough to be eaten or to be sold when they are about three to four months old.

209. After four months of age, rabbits begin to eat a lot more food. So, you should try to eat or sell all of your rabbits by this time.

211. You will next learn how to tell the difference between female and male rabbits.

When should you mate female rabbits again?

221. However, a female rabbit must be strong and healthy and be fed good food to produce healthy babies that many times each year.

222. When you first begin to raise your own rabbits, you should mate your females only four or five times each year (see the diagrams on pages 26 and 27).

223. After you have been raising rabbits for some time and you see that your female rabbits are strong and healthy, you may be able to mate them more often.

224. However, if you do mate your female rabbits more often, make sure that you feed them enough so that they do not lose weight.

225. Babies will be born four times a year if you mate your female rabbits when their babies are eight weeks old.

226. Babies will be born five times a year if you mate your female rabbits when their babies are six weeks old.

When to replace your full- grown female rabbits

228. As long as your full- grown female rabbits are healthy and have healthy baby rabbits, you can continue to mate them until they are three years old.

229. However, after three years you should replace them with other full- grown females. You can either buy new females or you can use your own.

230. If you decide to use your own, choose one or two of your healthiest and strongest young females before you eat or sell any of your young rabbits.

231. That way you will always have a healthy young female ready to replace one of your old females or a female that becomes sick. You can also use a young female if you decide to mate more than two female rabbits.

When to replace your full- grown male rabbit

232. Male rabbits can be used for mating until they are about three years old, and even longer if they are healthy and the females that they mate continue to have healthy babies.

233. However, you should not mate rabbits from the same family or your baby rabbits may not be strong and healthy.
234. So, after you begin to use your own females for mating, you should replace your male rabbit about once every year. That way you will be sure not to mate a father to a daughter.

236. Perhaps you can find another farmer with rabbits who would like to exchange male rabbits from time to time. However, be very careful that your new male rabbit does not come from the same family as your old male rabbit.

Exchange your old male for a new male

Remember to choose rabbits that come from big families of five to six babies that weighed at least 1 1/2 to 2 kilograms when they were three to four months old. In addition, remember that new females should have eight teats.