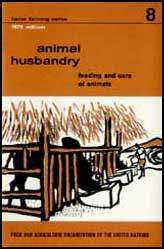 Why animals must be well fed

A child that does not eat well does not grow well; it is often ill.

A man who does not eat well cannot do much work; he is not strong, he is often ill.

It is the same with animals.

A badly fed calf does not grow well; it is often ill and often it dies.

A badly fed cow does not produce big calves; she cannot feed them well.

A farmer who feeds his animals well makes more money.

Animals change cheap food that is difficult to carry into other more costly foods that are easy to carry.

For example: grass, over- ripe yams, grain that is broken or eaten by insects, the remains of the family's food, are changed into milk, meat, work and young ones.

How food is used in the animal's body

When the animal eats, the food goes into the digestive tract. In the tract the food is changed and digested.

The digested part of the food enters the blood to feed the body. The rest is rejected as excrement.

When the greater part of the food enters the blood, the food is said to be rich.

There are rich foods and poor foods.

· Millet is rich food for certain animals. They can make good use of it. The greater part of it enters the blood. One kilogramme of crushed millet can give an animal's body as much strength as six kilogrammes of grass.

· Hard, stringy grasses in the dry season are a poor food for animals. The greater part of the dry grass does not enter the blood; it is rejected.

Not all animals digest food in the same way

Sheep, goats and cows eat the same food. These animals have the same stomachs.

In one and the same herd of cattle there are often animals that eat the same food but do not grow in the same way.

They eat the same food and have the same digestive tract, but some use their food better than others.

How to choose animals' food

You must choose foods that give strength and energy.

Foods that give nitrogen must be chosen

To live, plants take out of the soil mineral salts (see Booklet No. 6, page 10) which contain nitrogen, phosphorus, potassium.

All plants do not have the same need of the same amount of mineral salts.

Animals too have different needs.

· They need food that gives them strength and energy; these are called energy foods.

· They need food to make their muscles and their meat. These are nitrogenous foods, foods that contain nitrogen.

Modern farmers who raise animals also complete the food of their animals by giving them, as well as energy foods, foods that contain nitrogen. These foods are called feed supplements.

With nitrogenous foods an animal grows better and produces plenty of meat.

Food rich in nitrogen is called a protein- rich food.

Feed supplements, like fertilizers (see Booklet No. 6, page 14), are costly.

A farmer must choose the right feed supplement.

Many experiments have made it possible to work out the amount of digestible proteins (nitrogen) which each food contains.

The foods which are richest in nitrogen are oil cake, meat meal and fish meal, and milk.

The amount of digestible protein (nitrogen) in 1 kg of food

In the same way as for fodder or feed units, tables have been made which show the amount of digestible protein in each food.

Other tables have been made which show the protein needs of each kind of animal.

Animals make good use of energy foods and body- building foods if they are given mineral salts and clean water at the same time.

Five to ten kilogrammes of grass or silage are needed to give the value of 1 fodder unit.

One kilogramme of grass or silage contains between 10 and 40 grammes of protein.

Two to three kilogrammes of hay are needed to give the value of 1 fodder unit.

One kilogramme of hay contains between 25 and 70 grammes of protein.

1.5 kilogrammes of oil cake are needed to give the value of 1 fodder unit.

One kilogramme of oil cake contains between 150 and 400 grammes of protein.

· Grains have a value of about 1 fodder unit.

One kilogramme of grain is needed to give the value of 1 fodder unit.

One kilogramme of grain contains about 50 grammes of protein.

Three to five kilogrammes of tubers are needed to give the value of 1 fodder unit.

One kilogramme of tubers contains between 7 and 9 grammes of protein (see the table on page 37).

What is a mineral supplement?

If an animal lacks mineral salts. its bones do not grow well.

You can give mineral salts by putting salt in the drinking water or in the hay, or by giving native soda or a salt lick (licking stone).

80 grammes of phosphorus, and other salts.

Animals need vitamins.
Vitamins help in the development of muscles.
Only very small amounts of vitamins are needed.
Vitamins are found chiefly in grass and fruits.
It is good for all animals, even pigs and chickens, to eat a little grass.

Giving the animals water to drink

Animals lose weight in the dry season because they are not well fed, but also because they do not drink enough.

A sheep can drink 2 to 6 litres of water a day.

An ox can drink 30 to 40 litres of water a day, or even more in the dry season, when it is very hot and the grass is very dry. Oxen do not need to drink as much if it is not very hot and if the food contains plenty of water, such as green grass or silage.

· in the cattle shed, from a hollowed- out tree trunk, or from a barrel cut in half, or from a concrete basin, all of which must always be kept very clean.

· from a river or stream.

But you must be careful, because the water is often dirty and may give the animals some disease. Their water must always be clean.

Wells are sometimes very deep.
It takes a lot of work to draw water from them.
It is quicker with a hand pump or a motor pump, or with a rope and wheel.
You can use an animal to pull the rope.

Drawing water from a well

· So, remember, it is important:

· to give every animal every day all the water it needs, even in the dry season. It is best to make the animals drink two or three times a day.

· to give them water that is as clean as possible. Many diseases come from dirty water.

· not to let the animals stand in the water after they have drunk. They make the water dirty.
It is good to add a little salt to the water. We have seen that mineral salts are good for animals.

An animal must feed to live.

Many experiments have been made to find out what amounts of food an animal needs to live.

These are its maintenance requirement

These needs are different for each kind of animal and change according to the animal's weight.

Maintenance requirement of a 300- kg cow

· Many experiments have been made to find out what amounts of food an animal needs to produce milk, meat, work.

These are its production requirement.

Production requirement to give 3 litres of milk

Many experiments have been made for each kind of animal to find out:

To find out what an animal needs, add up all these requirements.

A cow weighing 300 kg which produces 3 litres of milk needs:

How to feed animals

Animals must be given enough food, rich food, prepared food.

An animal that doesn't eat enough won't put on weight.

What it eats all goes on maintenance (see page 20).

Instead of having five animals that do not gain weight, a farmer prefers to have four that he can feed well.

He sells them at a good price.

An animal that is raised for meat must grow and fatten quickly.

Then you can sell it more quickly.

You can raise another animal, and make a lot of money.

Rich food is costly, and a farmer doesn't want to waste it. Know the animals' needs (see page 20) and reckon what the food costs and what it earns in the way of meat, eggs, etc.

To help animals digest this rich food, the farmer prepares it for them, that is: grains are crushed, roots and tubers are cooked.

Animals must be fed:

· at the same time every day.

The feed supplement must be given every day at the same time, so that the animal can digest it.

· all the year round.

During the rainy season it is easy to feed animals well. There is plenty of grass, it grows quickly, it is young and nourishing.

During the dry season it is difficult to feed animals well. There is little grass, it is dry and hard, and not very nourishing.

So there are some months in the year when cattle are well fed, and grow fat and are in good health.

There are other months when animals are badly fed and lose weight.

This is why a modern farmer stores food for the dry season.

If he cannot feed all his animals well because he has too many, he sells some of them at the end of the rainy season.

Then the rest of his herd will not suffer during the dry season.

At the end of the dry season, when animals cost more, he has some fine animals to sell and earns more money.