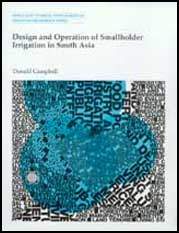 Much effort has been devoted to the organization or irrigator groups in South Asia over the last two decades. It has been a principal area of interest of national and international institutions associated with irrigation development in that region. Water User Groups are operating very effectively in some areas, and very poorly or not at all in others. The differences can be accounted for partly by cultural factors, there being stronger traditions of collective action in some communities than in others. Another factor is the nature of the irrigation supply, its regularity and its importance in relation to rainfall. Where the supply is reasonably predictable and its distribution within the tertiary command is regulated by long-established well-accepted rules, there is little need for formal organization of water users other than for maintenance of the tertiary channel system. On the other hand, where irrigation distribution is complicated by less predictable supply or where it is supplemental to variable rainfall, there is greater need for cooperation between cultivators within the tertiary command with regard to management of irrigation deliveries. Unfortunately, these are also the circumstances which put most strain on the group. To illustrate, if cultivators have planted in anticipation of normal seasonal rains plus regular supply of supplemental irrigation, only to encounter abnormally low rainfall coupled with less than usual irrigation supply, they are unlikely to conform to group decisions regarding sharing the deficiency, however rational such decisions may be. Faced with serious crop loss each individual is likely to take what irrigation he can get, with consequent breakdown of the group and of the tertiary rotation. Breakdown of the rotation may also occur in the wet season if the primary crop is paddy. Irrigation distribution by continuous small flow to each holding may be more convenient to the cultivator than rotational supply, and in most respects may be equally effective. Such a departure from rotation in the wet season may not be of consequence except for the difficulty of reinstating rotation in the dry season, when it is essential. Aside from stresses imposed on group operation by external factors such as deficiencies in supply, there may be internal problems, political and social. A socially or economically powerful individual or sub-group may unduly influence the functioning of a water user group, to the disadvantage of those of lesser standing.

In spite of the difficulties which have been experienced with water user groups, they are regarded as vital to effective operation of smallholder irrigation systems in many situations. The key question is how assistance may best be provided in their establishment and operation, without detracting from their essential autonomy (Byrnes 1992).

In designing an irrigation system, it is not sufficient to simply stipulate the formation of water user groups, if such are required. The necessary support for group formation and assistance with and monitoring of their operation should also be included as essential project components.