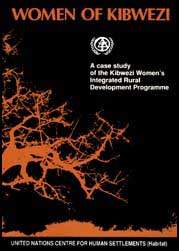 II. The Council for Human Ecology-Kenya and the Women of Kibwezi

If famine relief had ever been the right answer, it most certainly was not that any more. Through one of their former pupils, Dr. Maria Mullei, a member of the Council for Human Ecology-Kenya (CHEK), the Sisters heard of this non-governmental, non-political, organization interested in improving the quality of life in rural areas and having a holistic approach to the problems to be solved. They wrote to CHEK asking for assistance for the women in Kibwezi.

Several meetings were held in the Mission's social hall at Kibwezi, between Erica Mann, the CHEK Vice-Chairman, Dr. Maria Mullei, Sister Albertus and some 81 women leaders, each representing one of the traditional mwethia groups. The aim of the discussions was to develop a plan to:

(a) To improve well-being and health in terms of assuaging overall basic needs by increased food production and cash income:

(b) To create a model for the integrated development of rural enterprises which include women or are based on women, that could be used in policy formulation and planning by the Government of Kenya.

The situation called for an integrated, multilevel and multi-disciplinary approach combining material, financial and technical assistance. The women needed to be shown ways, perhaps new to them, in which they could help themselves and improve their common lot. At the same time, it was realized that very little could be done in the initial stages in the way of community participation: the physical and mental state of the women precluded action not directed to the immediate relief of their needs and anxieties.

Once the capabilities of the women were assessed, CHEK embarked almost simultaneously on several action programmes to comply with their desire to become self-sufficient with the minimum possible delay.

The Council was concerned by the fact that the women had only temporary rights to the land they occupied and that they could be evicted from it at a moment's notice and without compensation should the Government or another agency have some other land use in mind. As its top priority, CHEK decided to obtain security of tenure for the women. To this end, it invited the Member of Parliament for the area, to attend a special CHEK meeting held on 10 April 1981 to discuss this point. Recognizing that plot ownership was essential in order to encourage development to the full potential of the land, the Member raised the matter in Parliament and was able to assure the inhabitants of Kibwezi that their land would be adjudicated and that, in due course, they would receive title to their property.

On 17 April 1981, CHEK contacted the Beekeeping Division of the Ministry of Livestock Development (MOLD) - bees are considered as “livestock” in Kenya - and arranged for 60 Kibwezi women to be trained in apiculture. Kibwezi area has always been famous for the flavour of its wild honey but beekeeping and honey gathering have always been male activities. Since they were legally landless and had no livestock left, the women agreed enthusiastically to being trained in this trade which, in addition, was well within their physical and mental abilities. Training took place in Kibwezi itself, at the Mission and was free of charge. The cost of food and accommodation for the women was covered by a donor. On completion of the course, the women registered as a group with the Ministry of Culture and Social Services, which deals with co-operatives and such like, and paid KSh 200 for life membership in the Kenya Beekeepers' Association. After that, MOLD assigned two extension officers to Kibwezi, to assist them.

Early in 1982 another group of 60 women were trained by technicians from the Ministry of Culture and Social Services' Village Technology Centre, Karen, in the manufacture of sun-dried, cement-stabilized earth blocks. As the trainees came from all four locations of Kibwezi, basic equipment, consisting of CINVA rams, spades, wheelbarrows, hoes and sieves, was bought by CHEK for each group.

To start and implement an improved milk-goat breeding scheme CHEK contacted CARE and in 1982 15 groups of between 10 and 100 women, each with an equal number of goats, were successfully established. There were many setbacks but the number of goat-breeding groups has since increased to 65. All are well-established and profitable, have well-built goat houses and many of them now have dips and watering troughs.

Later, the Peace Corps Volunteer attached to the Women's Beekeeping Group, organized a group of women who knitted sweaters and cardigans for export and who also made the traditional, famous kiondo baskets for shipment to the United States of America. For various reasons beyond their control, the export of knitted goods had to stop and the women switched to manufacturing school uniform pullovers for the children of their District. In addition to exporting kiondos they now also produce about 200 each month for local boutiques.

A new project in which CHEK was assisted by the National Freedom from Hunger Council of Kenya, is that offish breeding. Two ponds have already been excavated by a group of women, and have just been stocked with tilapia fingerlings supplied by the Government Fisheries Department.

Another new venture inspired by CHEK but financed by the usual $US50 grant from the Trickle-Up Programme and the women themselves, is a small rabbit-breeding enterprise which has only just become established.

All these projects are monitored by CHEK, which also assists in other ways as and when required mainly by approaching funding agencies and channelling grants to make the various projects possible. When necessary, CHEK also gives technical assistance and acts as liaison between various governmental, non-governmental, parastatal, United Nations, religious and charitable bodies.

In 1988 CHEK obtained funds from the GTZ/GATE (German Appropriate Technology Exchange) for the erection of a canteen on the plot the women own in Kibwezi. Plans were prepared and approved by the appropriate authorities. Construction work was completed in October 1989. CHEK had enlisted the assistance of the Kibwezi-stationed Regional Office of Action Aid and obtained the secondment of a Peace Corps Volunteer to supervise the building process. This was carried out by the Kibwezi Youth Water-tank and Home Building Group, five rural polytechnic-trained men in their early twenties. A group of local young carpenters, initially also financed by the Trickle-Up Programme through CHEK and now well-established, did most of the timber work required. As their contribution, the women's brick-making group provided all the sun-dried cement-stabilized earth building blocks and others excavated foundations, drains and soakage pits. The German Volunteer Services have provided funds for the internal furnishings and equipment which includes various types of simple charcoal and firewood burning stoves and ovens, hayboxes (for cooking) and charcoal refrigerators. Except for the reinforcing rods and the cement needed, the wooden beams, doors and windows, all building material-required and all components were produced or obtained locally, at Kibwezi. This caused a number of difficulties and delays but, in the end, has resulted in a building of a much higher standard than any other in Kibwezi. The canteen will be an educational centre for better nutrition and an income-generating venture, and it will demonstrate appropriate technology cooking devices.

CHEK has solicited more funds for the erection of a hostel and classrooms. These have been promised but are not in hand yet. With the addition of these two buildings it will be possible for women from outlying areas to come to Kibwezi for training in adult literacy (facilities for which are already not equal to the demand), various handicrafts, and various practical home economics, agricultural, animal husbandry and agro-forestry courses from which not only the women but their families and the Kibwezi area in general will benefit. CHEK intends, if possible, to introduce courses in masonry, carpentry, roofing and the building trades, in an effort to restore to the women their traditional role of home builders, lost through the introduction of modern, western, building techniques to which the women have no access. It is also possible that tuition will only be for women, but some courses - if not all - will be accessible to men.

Through CHEK, this integrated women's rural development programme has received its due publicity. There have been radio and television programmes made about it, even a short newsreel and many articles were published in the local press. The projects have had many visitors from Canada, the Federal Republic of Germany the Netherlands and the United Kingdom. Several bus-loads of participants in the World Conference to Review and Appraise the Achievements of the United Nations Decade for Women: Equality, Development and Peace came to see them in 1986. In 1984, as one of the best five rural developments in Kenya, the Groups' Chairlady Mrs. Ziborah Nganga and the CHEK Executive Vice-Chairman were invited to participate in the International Exhibition of Rural Development organized by the Institute of Cultural Affairs held in New Delhi, India. Since then, Mrs. Nganga has also visited Zimbabwe where she has spoken to various women's groups on the ways and reasons of the Kibwezi women's success.

As the projects stand now with the exception of fish- and rabbit-breeding that were just began - they need almost no technical or financial assistance any more. The women are self-reliant and independent and their projects are self-supporting.