From Active Agent to Hazardous Waste 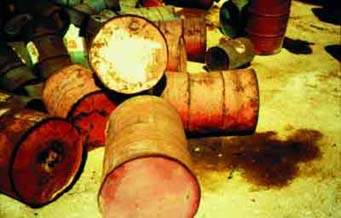 More than 100,000 tons of obsolete pesticides in developing countries must be disposed of.

The scene was unsettling: over 200 rotten, rusty, leaky drums of dieldrin - over 47,000 liters in all - were found scattered across a large area in the southern part of the island. The pesticides stockpiled at the government-operated Plant Protection Service store were found to be dripping out of the rusted-through drums and seeping into the ground. Safe local disposal had to be ruled out, so all 47 tons of pesticide were transferred to Great Britain for ultimate disposal in a special high-temperature incinerator.

Throughout the country, at all strategically important points, there are storage sites containing large amounts of insecticides for use the next time the country is plagued with swarms of locusts. The results of an inventory conducted in 1993 documented some 200,000 liters of dieldrin, some of which was stored in leaky drums. Near Ayoun al Atrous, more than 78,000 liters of the pest killer jeopardized the wells from which the people got their drinking water. Consequently, in 1994, the contents of the most badly corroded drums were refilled into new containers as an initial remedial step. Then, in September 1997, the entire remaining stock of dieldrin was taken to the Netherlands and incinerated.

Two different countries and two extreme examples, but one and the same substance. And no end in sight, because what s in a name? The countries involved could just as well have been Mali and Zambia, Tanzania and Mozambique, or Nicaragua and Pakistan. And the substance in question is not always dieldrin. Plenty of other pesticides also have quietly emerged as troublemakers in the course of time.

And the worst of it is that no one knows for sure how bad the problem really is. According to FAO estimates, some 20,000 tons of obsolete pesticides, i.e., plant protection agents that can no longer be used, are lying around various parts of Africa. And that is probably an understatement. Also, while the problem is particularly conspicuous in African countries, it is by no means confined to that particular continent.

All non-OECD countries together are believed to have more than 100,000 tons of obsolete pesticides in storage, largely in Africa, Asia, Central and South America. Even Europe has its pesticide problems. The former German Democratic Republic (GDR), for example, which was a major exporter of pesticides, sent a consignment of such products to Albania in 1992. Since the goods were being donated to Albania by a company in West Germany, it was a fully legal transaction. Then, as the government in Tirana realized what kind of “gift” they had received, the traceable remainder of 460 tons of pesticides had to be declared obsolete - and that made headlines. A large proportion of the 100 or so agents supplied in this way were no longer serviceable. Seventeen of them contained active ingredients that were already banned for use in the Federal Republic of Germany, including, for example, camphechlor and various compounds of mercury.

Dieldrin is the trade name for a broad-spectrum insecticide, 85% of which consists of the agent HEOD. This organochlorine (= chlorinated hydrocarbon) compound was discovered in the 1940s and produced by Shell International Ltd. in the Netherlands and the United States. It is a highly toxic insecticide which the World Health Organization assigned to the hazard category I b (highly hazardous). It accumulates in the food chain and is characterized by high persistence. It is suspected of having carcinogenic effects on humans, though this has not yet been confirmed.

For over 20 years, dieldrin was in widespread use in the farming sector, as a wood preservative, and in the fight against malaria, river blindness and the tsetse fly. Dieldrin was one of the most effective insecticides available. It was even recommended by the FAO for use as a locust control agent. Dieldrin was banned in the Federal Republic of Germany in 1971, and the USA prohibited its use in agriculture and practically all other areas of application in 1974. Since then, other countries have done likewise, particularly as new, less toxic, less persistent agents became available. By 1977, Shell had scaled back its dieldrin production volume by one-half, and then discontinued it altogether in 1987.

4,6 dinitro-o-cresol (DNOC) is an aromatic nitro compound with insecticidal, herbicidal and acaricidal properties. Over 40 years ago, it was one of the first pesticides to be produced on a large scale, initially by Bayer AG, but later on by many companies around the world. Thanks to its long shelf life, it was very well-suited for use as a strategic insecticide for locust control in tropical zones. DNOC was produced and applied in all types of formulations but was most frequently dissolved in petroleum.

DNOC is listed in the WHO hazard category I b (highly hazardous). It can be absorbed through intact skin and assimilated/ingested via the lungs and the gastrointestinal tract. Acute and chronic intoxication manifests itself in damage to the heart, liver and kidneys and in irritation of the eyes and respiratory organs. DNOC shows a strong tendency to accumulate in the blood, eventually leading to death. DNOC is also believed to have mutagenic effects.

Being readily soluble in water, DNOC is highly mobile. In a body of water, it proves highly resistant to microbiological and physicochemical transformation reactions. In soil, however, it is subject to rapid microbiological decomposition. DNOC has been supplanted by more effective, less toxic pesticides. However, residual inventories of DNOC can still be found in numerous Third World storage facilities.

Dimethoate is a stomach/contact insecticide and acaricide for use against numerous different pests. Chemically, it is an organophosphorus compound. It is made and marketed around the world under various trade names and formulations by a number of companies.

Dimethoate has been assigned to the WHO hazard category II as moderately hazardous. It is suspected of causing damage to the nervous system and of irritating the eyes and skin. In-vivo oxidation produces dimethoate oxone, an acutely toxic isomer with a strongly inhibiting effect on cholinesterase. Dimethoate oxone appears to be more persistent than dimethoate itself. 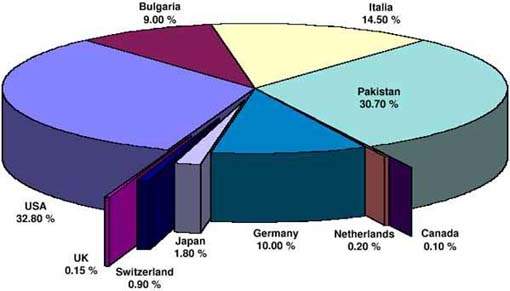 Pakistan: Origin of pesticide stocks according to an inventory from the Punjab Province

Thus, an initial resumould read: immense quantities of old pesticides are still to be found in stores all around the globe. Only some of the precise quantities and locations are even known, and the extent of the potential hazard to humans and the environment can only be guessed at. We are dealing here not with any particular agent, but a broad range of them - some of them unfit for use and others prohibited from use: pesticides have become hazardous waste.

These things went on for a long time - ten years or more - during which surplus pesticides were laid aside, often in completely unsuitable storage facilities with no protection against the elements, in containers that had already been treated roughly on their way there.

As time passed, the chemicals gradually decomposed. In the course of such decomposition processes, which defy manipulation, highly toxic decomposition products can form. The agent s effects become unpredictable. What eventually remains is a poisonous substance that amounts to a potential hazard. And so, the economic loss evolves into an ecological problem as well.

There are many reasons why pesticides are left lying around for such a long time. The most frequent case is that of strategic stores of pesticides being saved up for sudden calamities like swarms of locusts. Then, if fewer of the pests turn up than expected - or none at all - there is no reason to bring out the pesticides.

Various other well-meant aid deliveries also ended up in indefinite storage because they simply did not fit the requirements.

In the absence of reliable inventory data, records of disposition and consumption prognoses, selective procurement was practically impossible. Often enough, either the wrong pesticides were delivered or the formulations precluded the agents optimal application. Unsuitable containers and inadequate labeling made the users unsure of themselves, so they left the pesticides lying where they found them. There were also cases in which a partial or total lack of quality control led to developing countries receiving substandard pesticides. Wars, which tend to cause drastic downturns in production, also have negative effects on pesticide consumption. Consequently, large stocks of pesticides are left behind and forgotten at abandoned storage sites.

One change of course that was effected with the best of intentions had unanticipated consequences: For quite some time, together with such other organochlorine compounds as aldrin, endrin, DDT and BHC, dieldrin was the standard insecticide for use against locusts, particularly in emerging African countries. Once a range of less persistent, less toxic alternatives became available, however, the United States Agency for International Development (USAID) made all further technical assistance contingent upon abstention from the use of “drins”. Other donors followed suit, and the pesticides in question became obsolete and had to be disposed of. What those responsible for the ban had neglected to consider was that large quantities of these agents, dieldrin in particular, were still in store all over the world, and no transition period was allowed.

Thus, the transition from pesticide to hazardous waste takes place for many reasons, some of which are of much more consequence than others. Naturally, if no one had ever bought any pesticides, none would have to be disposed of. And without the efforts of numerous donors, there never could have been such a massive accumulation of old stocks. Industry, too, has been repeatedly criticized. The producers and suppliers of pesticides have been accused of contributing toward the pointless accumulation of pesticides through their excessively aggressive product marketing activities.

Donors, governments, industry - all have contributed to the dilemma. As such, it would make no sense to point the finger at any one in particular. What would help, though, would be for all those concerned to accept their own responsibility for the problem and then search for solutions together. This should not be perceived as a call to simply atone for past sins; the idea is to also make provisions for the future.

Not all actors always own up to their joint responsibility. More than one project has been frustrated by a lack of pertinent willingness on the part of competent authorities in the countries in question before the concrete phase was ever reached. Conversely, there have been other, very successful cases of cooperation that can stand as examples for future work. Why? Because all concerned learnt lessons from their past mistakes. 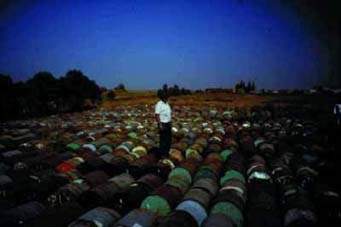 Morocco: Donors, governments and industry have all contributed to the dilemma.