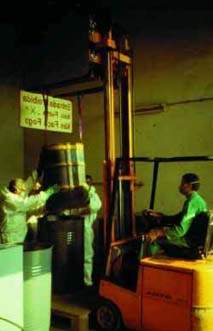 Mozambique: Redrumming is a first step to prepare leaky drums for transport.

Through most of the 1990s this southern African country remained a focus of interest. The project’s first local encounter with obsolete pesticides there was in 1992, when hundreds of empty containers were found stacked in a closed-down Shell pesticide formulating plant, along with 70,000 liters of azodrine/DDT and 80-plus tons of contaminated soil, all in metal drums.

And this was only an interim storage site. In September 1990, namely, Shell International Ltd. had undertaken a safeguarding and cleanup operation, in the course of which the agents had been filled into new drums and stored in old containers on the premises of the Maputo formulating plant. Before that, they had spent at least 15 years at the government-operated pesticides depot in Beira. The operation was necessary, because the insecticide was threatening to dribble into the Bay of Beira and wipe out its entire fish stock.

At the request of Mozambique, the German government helped dispose of the waste. As it became apparent that the azodrine/DDT in question was not the only unwanted stock of plant protectants in Mozambique, the project expanded its activities to include a countrywide survey.

In early November 1994 the last containers full of obsolete azodrine/DDT, contaminated soil, pallets and drums arrived in Great Britain for incineration. By then, Mozambique had already embarked on a national inventory of obsolete pesticides. The survey, which took from August 1994 until March 1995, uncovered 610 different batches of pesticides at 41 sites scattered over the country, with a total volume of 510 tons of pesticides comprising 215 different formulations. Some 175 samples were sent to the GTZ laboratory in Germany for analysis in order to ascertain which of the stocks were obsolete and which could still be used. Just under half (49%) of the samples were found to be unfit for use.

The decisions were based on the 1987 Plant Protection Law, in which the Mozambican government had prohibited the use of 68 different active ingredients. The ban applied to 28% of the obsolete pesticides, most of which consisted of organochlorine compounds, with the remainder comprising mercury compounds. Their application is also prohibited by EU law.

Most of the other 180 tons of pesticides were older than 10 years. Chemicophysical analysis showed that they no longer satisfied the applicable minimum quality requirements. Thus, they could not be recommended for use. To be precise, 34% of the substances were older than ten years, and the age of 41% was no longer ascertainable.

How could this happen? Subsequent inquiries revealed that large amounts of organochlorine compounds were still being imported in the mid-1980s, despite the fact that the industrialized countries already had banned their use during the 1970s. Shortly thereafter, when the Mozambican government prohibited their further application and importation, the pesticides automatically became obsolete.

Apparently, the demand for some of the other agents had been overestimated. The lengthy civil war had done its part by causing a downturn in agricultural production. While 1,536 tons of pesticides were imported in 1987, that volume had dropped to 221 tons by 1989.

The examiners also discovered various inventory control and management deficiencies. Even after years of storage, many of the products could still have been in good condition, had they only been properly kept. However, not even half of the still serviceable pesticides were found to be in irreproachable containers, not to mention the condition of the storage rooms. The labels on half of the products were either missing or had become illegible. After such a long time, it was not possible to determine when the defects occurred and how much of the problem was attributable to the civil war.

The results of the survey not only form the basis of the disposal measures that the competent authorities in Mozambique want to take in cooperation with the Danish International Development Assistance (DANIDA). They also provide valuable information on how to avoid such problems in the future. The Mozambican government apparently had attempted to rectify some of the weak points. For example, with Danish assistance, the government was working to implement the plant protection laws dating from 1987. For several years now, Mozambique also has been practicing PIC procedures and has banned the import of certain pesticides. Thus, another scenario like that involving the chlorinated hydrocarbons should not recur.

Representatives of the Mozambican plant protection service have taken part in GTZ-sponsored qualification training for the storage - and transport-management disciplines. In the future, proper storage procedures should be able to prevent loss of pesticide quality and attendant hazards for people and the environment.

The Mozambican procurement system was modified in 1988/89. Since then, pesticides are being imported only on order and pursuant to competitive bidding. If the system is now able to guarantee demand-appropriate procurement at fair-market prices, the conversion will have been successful.

To be sure, some questions remain: Since 1994 various donors have been investing in agricultural reconstruction programs - the World Bank in cotton production, the African Development Bank in cashew nut production, and the African Development Fund in sugar production. The extent to which pesticides will be supplied within the scope of such programs, and how much consumption monitoring will be engaged in, remain to be seen.