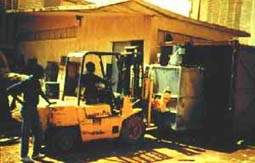 It took five years, until mid-1996, to dispose of all 57,600 liters of DNOC. As usual, the Pesticide Disposal Project had to do the pioneering work: This was the first time that obsolete pesticides were to be incinerated in a cement factory’s rotary kiln directly in a developing country.

The history of this disposal project goes back to 1991, when the International Red Locust Control Organisation for Central and Southern Africa (IRLCO-CSA) recognized a need for action and turned to GTZ for help. Four decades earlier, IRLCO-CSA had stockpiled large amounts of insecticides in the traditional breeding grounds of the red locust in Tanzania and Zambia in order to be ready “just in case”. The stocks included huge amounts of DNOC.

Due mainly to its persistence, 4,6 dinitro-o-cresol is a highly toxic pollutant. This DNOC was stored too long under poor storage conditions. Eventually, the corroded drums began to leak. The situation became more and more dangerous, particularly at the Muse storage facility, where more than 50,000 liters of DNOC were stored, mostly in leaky drums and large steel tanks situated just a few meters away from the banks of Rukwe Lake. The poison seeped into the soil and, as the groundwater table rose during the rainy season, into the lake as well. The resultant fish kill threatened the local population’s natural resource base.

The Pesticide Disposal Project conducted a survey in 1992. The possibility of local disposal was investigated, and the subsequent plan of action regulated the safeguarding of the stocks and their transfer to Dares-Salaam. It also envisaged the design of a facility in which the DNOC could be incinerated in a cement kiln in line with stringent safety standards. This waste introduction system (WIS) was designed as a mobile unit.

Safeguarding measures were commenced with in late 1993. Under adverse logistical and climatic conditions, all 57,600 liters of DNOC stored at the five different sites were filled into containers and transferred by rail to Dar-es-Salaam, where an interim storage facility had been set up on the premises of the Twiga Cement factory in Wazo Hill, where the DNOC was to be incinerated.

That took place in mid-1996 in the largest of the factory’s three rotary kilns. Bayer AG supported the measure by conducting the requisite incineration trials in its own laboratories.

The 4,6 dinitro-o-cresol was diluted in kerosene to a concentration of 20%. The resultant solution was pumped into the supply tank of the WIS and diluted with diesel fuel to a residual concentration of roughly 10%. A diaphragm pump injected the mixture under high pressure directly into the oil lance of the cement kiln. The incineration temperature was situated above 1,850°C. Afterwards, the 450 empty drums were recycled, i.e., cleaned, shredded and melted down at a local steelmaking plant.

In addition to the combustion gases, the process produced a small amount of ash that was subsequently integrated into the hot clinker (nearly 1,450°C) in the cement kiln. (Clinker is an aggregate used in the production of cement.) During the entire program, the cement clinker and dust were sampled but showed no indication of DNOC residue. The emissions were also continuously monitored. No rise in NOx emissions was noted. 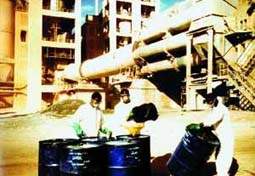 Tanzania: For the first time, a large quantity of obsolete pesticides was incinerated directly in a cement kiln.

The actual incinerating process in particular led to some substantial delays, most of which were attributable less to technical difficulties than to administrative and social problems.

Clashes of competence between various authorities caused one delay after another. In addition, the cement factory had not pursued an adequate information policy, so at the beginning of the operation the employees were distrustful of the planned activities. This was the first time that such a large amount of obsolete pesticides was to be incinerated directly in a developing country. There was defensiveness on the part of those who felt like guinea pigs. It took an interdisciplinary team of representatives from various ministries and the university to remedy the situation by backstopping the entire program and monitoring the incineration process. Indeed, that team has since become established as a “fixture” institution in Tanzania that is now supposed to plan and backstop future hazardous waste disposal activities.