Haiti is a pan of a large Caribbean island about 800 kilometers long, situated close to Cuba and to the Florida coast of the USA. It has a population of about six and a half million people, increasing by 5 per cent per annum in urban areas and by 0.7 per cent in rural areas. The country originally belonged to the French, it was occupied by the USA from 1915 to 1934 leading to a strong American influence in the country. Since 1994 Haiti has had a democratic form of government.

The climate of the island is humid tropical and the Haitan pan is largely mountainous. Agriculture is very poorly developed and holdings are generally too small to be farmed effectively.

Haiti is perhaps the poorest country in the Central American region with a GNP per head of 370 US$ (compared with Tanzania, which is reported to have a GNP per head of 100 US$). There are few natural resources; bauxite is the main one and there are unexploited deposits of low-grade brown coal. Only 3 per cent of its original forest cover remains, so much of the country is severely eroded.

Nearly a third of the population lives in urban areas and the urban population is increasing rapidly, especially in the capital, Port au Prince. The arable areas of the country have a very high population density of 800 per hectare. Nearly 60 per cent of the population is under 25 years old, literacy is 20 per cent, and school enrolment is only 52 per cent. 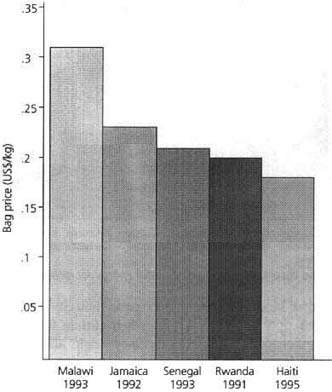 Households consume 92 per cent of all the energy used in Haiti. Nearly all of this (95 per cent) is either firewood or its derivatives. Charcoal accounts for 41 per cent of the fuelwood used, of which nearly three quarters is used in Port au Prince. The movement to urban areas has led to an increased demand for charcoal as the principal fuel.

The remaining household energy is provided by:

The minimum daily wage is US$2.23 (US$606 per annum). For those earning twice the daily minimum, 20 per cent of this will be spent on charcoal. The poorest 70 per cent of the population, mainly in rural areas, will generally collect fuelwood or other biomass rather than buy charcoal. 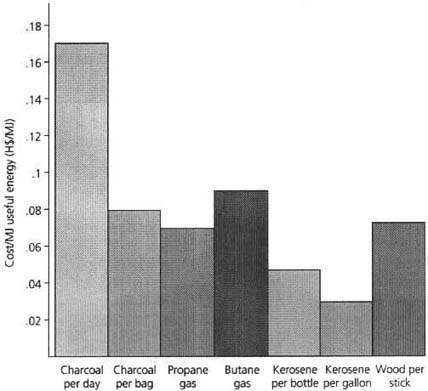 Figure 2: Relative costs per megajoule of useful energy for different types of fuel

Despite the forestry resources of Haiti being severely depleted, the price of charcoal is considerably lower than in other major charcoal consuming countries (see Figure 1). This is probably due to the poverty-stricken rural economy which causes farmers to supplement their incomes by producing charcoal.

Fuel prices are very much affected by the quantity purchased. Poor households pay more than twice as much as rich households for cooking energy. This is probably due to an increasingly impoverished population who do not have enough cash to buy large amounts of charcoal at any one time. From Figure 2 it can be seen that:

· poor households could halve their current fuel expenditure if they could afford to buy charcoal by the bag, rather than buying enough to cook one meal.

· To cook the same quantity of food, the cost of using kerosene is about one third of that paid by the poorest households who buy charcoal in very small quantities.

Kerosene prices have remained very stable and look set to remain low compared to LPG because of the favourable price structure set by the government for imported fuels.

From Figure 3, the following can be deduced:

· for households rich enough to purchase bags of charcoal, butane would not provide savings.

Choice of appliances will depend on cost, convenience and comfort. The best option is probably charcoal for long slow cooking and kerosene or LPG for rapid cooking.

It has been estimated that 11 per cent of urban households own gas appliances. In energy terms, one tonne of LPG is the useful equivalent of 4.7 tonnes of charcoal. On this basis, 60 000 tonnes of LPG would be needed to replace the total Haitan demand for charcoal (a tenfold increase in current consumption).

Fuel saving assessments using four types of stoves were carried out for low/middle income families with an average household size of seven persons per household. Table 2 shows the savings compared to a traditional charcoal stove. The Ceramic stove is a KCJ type; the Ronderosa (similar to a Burundi stove) originated as pan of the Rwanda World Bank project; the BME stove is one promoted by the Bureau des Mines et de L'Energie; three types of traditional charcoal stove were used (Entole, Potage, Masonry) and no significant differences in fuel consumption were observed so an overall figure is given.

To assess the impact of these stoves, the payback time before the stoves provided real saving were calculated. Table 3 shows the payback time for a ceramic stove and a traditional Entole stove.

During the period 1990-93, 80000 BiP stoves, known as 'Ti Cheri' stoves were sold. These are gas stoves which were sold at a very attractive price. The increase in gas stove ownership has not been matched by a comparable increase in gas consumption (and subsequent reduction in fuelwood use). The use of LPG represents, in energy terms, only about 11 per cent of the equivalent charcoal consumption. The popularization of the BiP stove has thus been disappointing in terms of the quantity of fuelwood saved. Gas has provided an additional energy source rather than a replacement and it will take favourable gas prices and improved availability before gas significantly replaces charcoal.

Gas prices are very competitive with charcoal, but the initial outlay for equipment and the recurring cost of a cylinder will remain a major barrier for low income and poor households because of their cash flow problems. However, gas usage will most likely grow at a steady rate, particularly amongst middle income households as they become more affluent.. Kerosene stoves are cheaper than gas stoves. In addition, kerosene can be purchased in small quantities depending upon a person's cash flow situation. In the short to medium term, kerosene stoves should be targeted at low income households whilst the gas companies should continue to popularise gas amongst the middle income households. 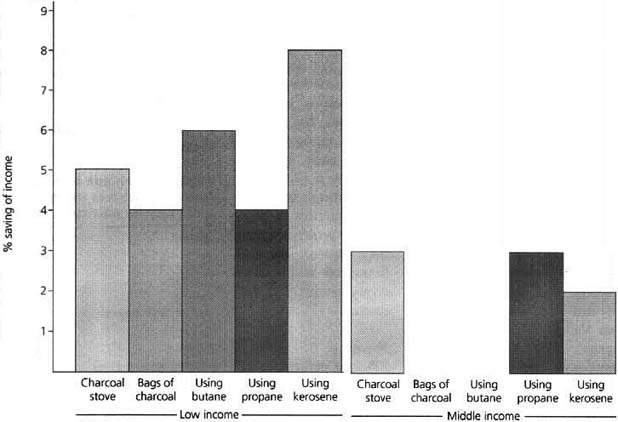