A Catholic Framework on Debt

Catholic social teaching offers a compelling way of understanding the complexities of the debt crisis and its impact on the human community. Our tradition draws from a large body of work that, in part, addresses the moral dimensions of economic activities. We believe that ethical analysis, rooted in human dignity, is as fundamental as any economic analysis to solving the debt crisis. Catholic social teaching offers a set of principles, outlined below, for action in a world longing for greater justice and peace. It calls us to examine the situation of international debt and discern the options and commitments necessary to bring about urgently needed economic changes.

The foundation of Catholic social teaching, and the starting point for our work on international debt is the belief that each individual is sacred. All people are created in the image of God and are the clearest reflection of God that exists in this world. The Holy Scriptures state in Genesis that “God created humans in his image, in the divine image he created them” (Genesis 1:27). Each person has a basic dignity that stems from our very creation rather than from any action on our own part. The dignity of the human person is a criterion against which all economic, political, and social systems are to be judged and all aspects of the debt situation must be measured.

Human rights are moral claims to goods which are necessary to protect and promote human dignity. Rights and duties are complementary; every person possesses both. They specify the minimum conditions necessary to protect and promote human dignity in the political, social, and economic order. In Catholic social teaching, rights and duties also extend to relationships among states. States have responsibilities to each other and to the international common good.

Dignity, rights, and duties are protected or eroded by the social communities in which people live. Individual and communal duties are fulfilled in three essential communities that express the social nature of each person: the family, civil society, and the wider human community. All individuals have the duty, as members of society, to contribute to and to further the achievement of the common good. The common good is defined as the sum total of those conditions in society that make it possible for all people to achieve their full human development.

The common good has both national and international dimensions. There is currently no entity, however, which carries the responsibility and power to promote the international common good. In the absence of such an international authority, additional demands fall upon states, international institutions and private actors to accept their responsibility to promote the international common good. This responsibility demands that these bodies promote policies that increase the ability of marginalized people to participate in global economic and social systems. Such participation is implied in the principle which Catholic Social Teaching calls the universal destination of the goods of creation. This principle calls us all to see that the goods of creation are destined by God for the welfare of the whole human community. Pope John Paul II has called for the virtue of solidarity to guide our responsibilities toward others and toward the requirements of the universal common good. He speaks of solidarity as “... a firm and persevering determination to commit oneself to the common good; that is to say, to the good of all and of each individual because we are all really responsible for all.” (Sollicitudo Rei Socialis, 38)

Preferential Option for the Poor

The preferential option for the poor calls each individual to give a weighted concern to the needs of the poor in all economic, political, and social decisions because it is the most impoverished people whose rights and dignity are most often violated. The preferential option for the poor is a principle that enters the universal social teaching with Pope John Paul II but reflects a moral demand as ancient as the Hebrew prophets. It is clearly conveyed in Jesus' words that whatever we do unto the least of our brothers and sisters we do unto Him, and it has more recently come to light in liberation theology. Those members of society with the greatest needs require the greatest attention and response. By assisting those who are most vulnerable, an option for the poor strengthens the entire community, for the deprivation and powerlessness of the poor wounds the whole human community. Such wounds are healed only by a greater solidarity with the poor and marginalized.

Archbishop Renato R. Martino, Vatican nuncio to the United Nations, explained this principle in a 1997 statement to the UN: “If the process of globalization which is taking place in our world is to be truly human, it requires the construction of a truly global community. In such a community, he said, there must be concern for all and especially for the weakest.

Catholic social teaching sees the international debt of poor countries as both a complex policy issue and a profound moral challenge. In moving toward resolution of the problem, neither its complexity nor its moral character can be ignored. International debt is complex in size and scope. It affects the welfare of millions of people, scores of countries, international financial institutions, and private sources of funding. International debt also presents a moral challenge - the particular concern of the Church in addressing this problem - in how it affects the human dignity, human rights, and human welfare of some of the most vulnerable men, women and children in the global community. But the moral structure of international debt also includes the proper definition of the duties, responsibilities, and rights of a complex fabric of individuals and institutions. The moral dimensions of the international debt problem extend to how it was contracted, who was involved in key decisions, which institutions are now primarily responsible for its resolution, and what moral criteria should be used to articulate, structure and adjudicate this fabric of relationships.

In Catholic teaching, lending money is a legitimate moral enterprise if key conditions of justice are met on the part of the lender and borrower. This principle applies to both individuals and states, although the latter problem is much more complicated in its definition of responsibilities. It is this latter issue which today occupies the concern of many in the international community. The key principles to evaluate the moral problem in Catholic teaching are those of justice (commutative and social justice) and the option for the poor.

Commutative justice governs the kind of contractual obligations which are incurred in international lending and borrowing. But this contractual justice must be located within the broader context of social justice, since the problem of international debt is today a moral challenge not only for lenders and borrowers, but for the international community as a whole. To focus only on the terms of the loan and the nations or institutions involved rather than the conditions under which the loans were contracted, the purposes for which they were used, the impact on individuals today as the terms of repayment are set, is to isolate commutative justice from its social context.

The principles of social justice focus in this instance on the broad range of institutions which must be mobilized if the moral dimensions of the debt are to be addressed. Hence, responsibilities exist not only for the debtor countries and their creditors, but for international institutions (some of which hold debts), for the more significant states with major economic roles in the world, and for nongovernmental organizations, some of which are deeply involved in the lives of debtor nations. 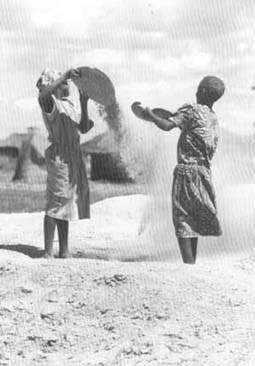 Interpreting the norms of social justice will require attending to the principle of the option for the poor. This principle calls attention to the condition of those in debtor nations who had no voice in the contracting of debts but whose lives are deeply affected by the choices made in resolving the debt problem. It is this principle, in combination with the requirements of social justice, which have led many in the Church to follow the leadership of Pope John Paul II in addressing the problem of the international debt which so seriously threatens the future of poor countries and their populations.

Cardinal Roger Etchegaray stated in his introduction to the 1987 Vatican document, At the Service of the Human Community: An Ethical Approach to the International Debt Question, “Debt servicing cannot be met at the price of the asphyxiation of a country's economy, and no government can morally demand of its people privations incompatible with human dignity.” He says further that, “in a world of increased interdependence among nations, an ethic of expanded solidarity will help to transform economic relations (commercial, financial and monetary) into relations of justice and mutual service, while at present they are often relations based on positions of strength and vested interests. Due to their greater economic power, the industrialized countries bear a heavier responsibility which they must acknowledge and accept... the time is over when (the industrialized countries) can act without regard for the effects of their own policies on other countries.”