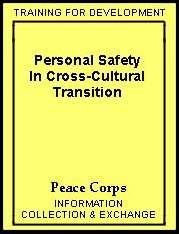 Jack had enjoyed the companionship of the other 27 PCTs during training but was eager to get settled at his site. The permanent house he was to occupy during his Peace Corps service had sustained considerable damage during an unusually heavy rain storm, and when Jack arrived at his site he was met by a very friendly young man who took him to a small native hotel where he could stay until his place could be made ready for occupancy.

The room in the hotel was quite small. In addition, Jack was told that should the hotel become fully booked, he would be expected to share his room with some other male guest.

Immediately, Jack realized that security might be a problem. He had brought with him his camera, guitar, an extra pair of heavy shoes, and the transistor radio his family had given him as a departing gift. Jack's new-found friend saw the possible security risk also and offered to keep his valuables safe for him until he could move from the hotel to his permanent residence.

Jack began his job and felt he had established good relationships with his supervisor and his counterparts. His language was good. He had beers in the evenings with his coworkers and could hardly wait until the time when he would have his own place and be able to invite friends in to play cards in the evenings.

After two weeks, the house was ready. Jack moved all of his personal belongings from the hotel. The next day at work, he saw his friend and told him the good news and expressed his gratitude to him for keeping his valuables.

The friend denied having ever taken the items to keep. Jack was stunned. At first he thought he had misunderstood. But his language was excellent now and there was no doubt. The friend repeated his statement that he had no knowledge of Jack's camera, radio, etc.

When Jack could not persuade his friend to admit the truth, he threatened to go to the police.

His friend replied: "I've lived here all my life - everyone knows me. You are new - no on knows you. It's your word against mine..