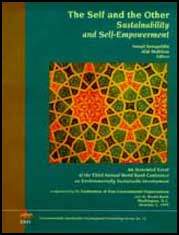 As a psychoanalyst I feel privileged to be at this seminar with people from other disciplines who are asking questions that are relevant to psychoanalysis. I think we analysts have something to say that might be useful. I would like to discuss material covered in three publications I have co-authored: Aggression in Our Children: Coping with It Constructively; Prevention/Early Intervention Parent-Child Groups-Followed Study: Preliminary Report; and Parenting Education for Emotional Growth: A Curriculum for Students in Grades Kindergarten through Twelve.

One of the major problems we face is discovering ways to bridge what we find in the individual to what we find in society as a whole. I would like to link my comments to the remarks Mohamed Arkoun made earlier today.

The better an individual's self-adaptive functions are, the greater the chance that he or she will control his or her aggressive energies. If an individual can establish socially responsible relationships, he or she will be able to take charge of his or her destiny, be efficient, and adapt constructively to unpredictability. An ability to establish such relationships can be achieved most successfully by encouraging a child's optimum physical and emotional development. The best way to promote such development is to ensure a child receives the best parenting. Through formal educational training programs, child rearing can be significantly improved to promote growth. We do our parenting in a haphazard manner, and it is time that we recognized how complex an undertaking it is. In the past one hundred years psychoanalysts have learned a great deal about the basic emotional needs of children and what can promote or hinder their development.

Through formal educational training programs, child rearing can be significantly improved to promote growth. We do our parenting in a haphazard manner; and it is time that we recognized how complex an undertaking it is - Henri Parens

I was part of a team of mental health professionals who worked together for twenty years at the Medical College of Pennsylvania to develop parenting programs. These programs are based on theories as well as research and clinical work from psychoanalytic psychiatry and are aimed at preventing what I call experience-derived emotional disorders. Our work also focuses on preventing violence, using two methods we have developed: early intervention through parent-child groups and a curriculum for students from grades kindergarten through twelve, which includes a textbook and lesson plans.

In parenting education we do not dictate child rearing measures. If the parents comprehend their child's basic emotional needs, they will have a better understanding of the child's average, expectable, ageadequate capabilities. In addition they will be aware of the tasks of normal development that each child faces and has to master in the course of growing up. As a result parents will be better prepared to tailor their rearing strategies to the specific needs of their child at any given moment.

Our child rearing recommendations are based on principles of making the most of the child's development and inborn endowments. These recommendations are highly adaptive to parental preferences and philosophies. They apply to the rearing of all children, regardless of race, religion, or socioeconomic status.

Prevention/Early Intervention Parent - Child Groups Follow - up Study. Preliminary Report contains the findings of a nineteen-year study, which was conducted as follow-up to a 1970-77 parenting education project involving a parent-child group. During this period we saw children with their mothers in an educational group setting rather than a treatment setting from the time the children were born until they reached age four or five. The two-hour meetings took place twice a week.

Nineteen years after the project started, we collected data about the children and the mothers through mother and child questionnaires, interviews with the mothers and children, and the administration of the Fitzgibbons Anger Inventory to the children. We have broken down the results of the data to address questions such as: How frequently did our population get into trouble with the law? How much drug abuse was there? What was the rate of dropout from school? How many of the children went to college? How much pregnancy and parenthood was there?

We have compared the figures on our population with those on the community from which they came. Employing the Fitzgibbons Anger Inventory on four measures of anger, three categories of anger-mild, moderate, and severe- were used to assess the degree of anger expressed by our population when they were adolescents. They scored in the mild category on all measures, in contrast with the adolescents in the community, who scored in the moderate category.

In the report we have also discussed the changes that occurred in the quality of parenting as a result of the parent-child group. We asked the mothers to rate themselves as parents twelve years after the parent-child group had been completed. We also asked staff who worked with the group but had not seen the mothers' self-ratings to evaluate the parenting of the mothers using a ten-point scale. Using this scale, we discerned that the mothers had shifted from the category of growth-disturbing parenting to that of growth-promoting parenting. Based on the mothers' impressions and the staff's activities and impressions we are led to assume that our work contributed to this shift.

Following many years of research, we have also reformulated the psychoanalytic theory of aggression. Putting this reformulation to work for society, we published Aggression in Our Children: Coping with It Constructively, written for parents and teachers as well as other groups.

Parents can cope with aggression in their children more successfully if they understand what it is. What is troublesome or positive about it? What should parents encourage in a child that is aggressive, and what should they try to contain? What Susan G. Lazar said is applicable here.

There are at least nine valid models of aggression that address the kinds of issues with which we are dealing. Although these models differ significantly in their parameters, descriptions, and definitions, there is general agreement among them that an experience of "excessive unpleasure" generates hostility in human beings. Excessive unpleasure refers to our reaction to an experience that leads us to say, "I have had it. I cannot take any more." The source of that which we can no longer tolerate may be an insult, a narcissistic injury, significant deprivation, or physical pain. l have defined three categories of aggression: nondestructive aggression; noneffective destructiveness, which is prey aggression; and hostile destructiveness, which includes anger, hostility, hate, and violence. We assume that hostility is not inborn but generated. What are inborn and need to be protected are nondestructive aggression and prey aggression. Prey aggression results in destructiveness stemming from the pleasure of having found the prey we need for survival, rather than from hostility.

If the hypothesis concerning excessive unpleasure is correct, and there seems to be a consensus among researchers and theorists that excessive unpleasure does generate hostility, then I argue that hostility can be mitigated or intensified. Because of the way children are reared and the way pain is created in them by the manner in which they are handled-given their particular biological endowment-hostility is going to be generated within them. It is no surprise to me that we have so much violence in the streets. The motivation for this violence is different from that which incited the violence we saw in "The South Slope of Liberty."

I understand what Mohamed Arkoun means when he says that violence begets truth. The truth he is referring to is the truth of a particular perpetrator. But this truth, perpetuated by violence, is not instigated within every human being in a particular society. We need to look at the beginnings and early experiences of individuals who perpetuate the truth by means of violence. The backgrounds of both Adolf Hitler end Joseph Stalin account for certain aspects of their personalities and what they eventually achieved. Stalin was enraged at his father because his father beat Stalin's mother. At one point in adolescence he told his father he would kill him if he touched his mother again. Instead he killed more than 15 million people.

What are inborn and need to be protected are nondestructive aggression and prey aggression. Prey aggression results in destructiveness stemming from the pleasure of having found the prey we need for survival, rather than from hostility - Henri Parens

Negative peace is essentially the overcoming of violence, and positive peace is the creation of mutually enhancing relationships with others - Betty Reardon