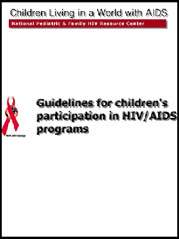 Children are living in a world with AIDS.

· There are children who are themselves infected with HIV. By the end of 1997, 1.1 million children were living with HIV. AIDS is now the fifth leading cause of death amongst children of 1-4 years, and seventh in young people between the ages of 15 and 24.

· There are children who are uninfected but living in an infected family. More than 8 million children world-wide have already lost their mothers to AIDS, and at least 30 million are thought to be living with parents who are HIV positive. Of the people who died of AIDS in 1997, 2.3 million (46%) were women and 460,000 were children.

The voices of children and young people themselves are not often heard. These guidelines show how children and young people can be involved in education, prevention and care programmes related to HIV/AIDS. The extent and nature of their participation will vary in different countries, cultures and communities since the impact of HIV on families and on individuals varies and a child's place in society is viewed differently throughout the world.

These guidelines provide a framework for local projects to develop ways of working with children and young people that respect their rights and enable their voices to be heard. The definition of a child used throughout these guidelines is that set forth in the U.N. Convention on the Rights of the Child as "a human being under 18 years of age".