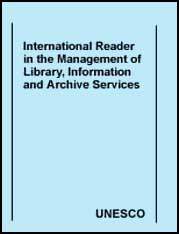 This book has been compiled for the benefit of the schools of library, archive and information science, for use in their courses on the management of information services and systems. It does not seek to replace the many standard textbooks on this subject which already exist, but is intended to supplement them. In particular, the book may be able to provide a more international perspective than many of the textbooks, which are mostly written with the information services of one particular country in mind.

The work takes the form of a collection of writings on the management aspects of libraries, archives and information units, writings which, we hope, will be of interest and use to both students and teachers. Its scope is wide, partly because the reader is avowedly international, and partly because of the nature of management.

HOW THE BOOK WAS COMPILED

The present book is a collaborative work. The editor submitted an outline plan of the work to Unesco in 1985, following guidelines suggested by the General Information Programme. Unesco then furnished the editor with a list of specialists in various parts of the world who were asked to suggest material which could go in the book. The editor selected appropriate items from the lists received and filled in any gaps with additional material. The contents of the work were then sent to the International Federation of Library Associations and Institutions (IFLA), the Fration Internationale de Documentation (FID), and the International Council on Archives (ICA) for their comments. However the final choice of items selected for the reader was made by the editor, who takes full responsibility for the contents of the book.

The following types of material were sought in order to select items for this reader:

- books or articles addressed to an international readership (this category of material was thought to be particularly valuable, but little was available, apart from Unesco's own publications);

- authoritative works which are well regarded in the country of origin, and which talk about the subject in sufficiently general terms for it to be readily understandable to readers in another country;

- books or articles with a comparative element in them; for instance those discussing a management practice developed in one culture in terms of another;

- material which took the form of a discussion, where differing points of view were clearly presented in a lively way;

- articles or extracts from books which to the editor seemed to be clearly written, which used the language well, and which were free from allusions or other references which would mystify an international readership;

- case studies relating to a particular country, especially if it seemed that the implications were of more general interest.

A DIVERSITY OF MANAGEMENT PRINCIPLES AND PRACTICE...

One of the original intentions, when Unesco commissioned this work, was to draw out the common elements in information management, and to illustrate them with authoritative and interesting writings. Underlying this aim was the assumption that there were universal principles of management, which would be valid for all places and for all times.

However, the more one goes beyond a single country, or a single cultural area, the more difficult it is to discern these common principles. Some principles, certainly, are more widespread than others, but this seems to be because they are the product of influential or powerful countries or are thought to be well-suited to a particular social or economic structure.

Even if we were to accept that such universal principles do exist, the manner of their application varies widely. It is easy to understand why this is so: management practices reflect the social, cultural and economic patterns of the country: they cannot simply be transposed without modification from one country to another and be expected to work. The literature of library and information management confirms this variety. Nearly all of it is written from the point of view of one country, or perhaps a group of countries of similar cultural tradition.

One might imagine that since libraries, archives and information centres do similar sorts of things, then their management practices should also be similar. There is some truth in this, but less than one might think. Information units, libraries and archives are rarely independent units in their own right. They are normally part of larger organizations of many different types: state bureaucracies, local or provincial governments, public and private corporations, professional firms, learned societies, schools, universities, voluntary bodies, and so on. Management practices vary greatly between these different types of institution, and the libraries and information units take on the administrative colouring of the parent organization.

...BUT MANY COMMON CONCERNS

It may be difficult to discern any universal principles of management, and management practices may vary, but there is no doubt that librarians, documentalists and archivists share common management concerns. All over the world there is the same preoccupation with finance, staff, efficiency, communication, buildings, meeting users' needs, and so on.

This book, therefore, will present a selection of writings about common management concerns. It is a book to dip into. Not all articles will be relevant to all countries, and some have been chosen to illuminate particular management concerns felt by information professionals in particular countries. But the student will, we hope, be able to find a good deal of interest and value in these pages.

It draws on material from many countries, and attempts to be truly international. However neither the distinguished panel of advisers, still less the editor can be familiar with all the world's literature on this subject. In particular, contributions in oriental languages have had to be left on one side for linguistic reasons, and the very considerable literature from a number of other countries makes only a brief appearance in this pages.

The reader will probably find it helpful to browse through the commentary which follows to see what material will be most useful for his or her purpose. For technical reasons there is no index, but the annotations in the following pages serve as a reasonable guide to the contents of the book.

The editor would like to thank the following experts, nominated by Unesco, who kindly supplied lists of suitable material or made suggestions for the reader:

He is also grateful to the undermentioned people who helped him in various ways: by translating or evaluating certain material, or by supplying additional items:

The editor would also like to thank the copyright owners of the material included in this reader for allowing the material to be reproduced and translated. Full details appear in the body of the book.

Finally, he is grateful to Monsieur Yves Courrier and Madame A. Schurek of Unesco's General Information Programme for much helpful advice.