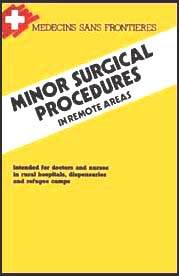 Drainage of liquid or air between the two pleural layers.

· 1 thoracic drain with trochar (type Monod) or a tubular catheter

Technique with or without a trochar

· Puncture point: on the anterior axillary fine, posterior to pectoralis major, above the nipple, which corresponds to the 4th intercostal space, 4 finger breadths from the axilla, at the superior edge of the inferior rib. (This point is considered the least dangerous, avoiding organ puncture. Theoretically it is too low for treatment of a pneumothorax and too high for treatment of a purulent pleural discharge).

· ATTENTION: there is often a tendency to longer the needle and therefore to risk a hepatic or splenic puncture.

· Inject local anesthetic (lidocaine 1 %) at the site of the puncture, cross all tissue plains until the discharging site is reached and then remove the needle while aspirating.

· Make a transverse incision of 1 cm with a scalpel in the cutaneous and subcutaneous tissues at the superior border of the inferior rib.

Drain without a trocar

· Introduce a pair of Kelly forceps into the incision at the smooth border of the rib and gently separate the intercostal muscle fibres, then perforate the pleura. Next, introduce the drain (with intrapleural perforations) between the clasps of the Kellys. ensuring that the other end of the drain is clamped.

· Introduce the drain until it is estimated that the perforations are within the pleura, knowing that the thickness of the well is about 3 cm (figure 55).

· Push firmly, until the pleura is reached, rotating the trocar with one hand and using the index finger on the trocar as a guard to prevent rapid entry.

· Remove the stylette and cover the end of the trochar with a finger. Then introduce the clamped drain.

· ATTENTION: during the few seconds when air can enter through the trochar, ask the patient to stop breathing in order to prevent air entry.

· Attach the drain to a drainage tube connected by an airtight seal to a bottle containing an antiseptic solution. The tube should be placed in the solution.

The drain must be fixed to the skin:

· Suture the drain to one of the edges of the wound and make a knot to ensure that the connection is airtight. Then criss-cross the suture material along the drain and fasten with a knot.

Attach another suture to the skin and around the drain, leave it long and knotted.

A sterilised anti-reflux valve is normally used, but if not available in the case of a pneumothorax, the end of a surgical glove attached to the drain acts as a valve.

Removal of the drain

When the draininage is complete:

· Cut the knot of the additional suture and the knot fixed to the drain.

· Make a bow with the additional suture.

· Ask the patient to stop breathing while an assistant removes the drain.

· Tie the knot and the additional suture will close the puncture wound.