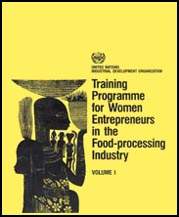 This training programme for women entrepreneurs in the food processing industry has been developed following a workshop organized by the United Nations Industrial Development Organization (UNIDO) and the United Nations International Research and Training Institute for the Advancement of Women (INSTRAW) in 1984 where a valid rationale for training programmes exclusively targeting women was determined.

While women have traditionally assumed considerable responsibility in the trading sector, they also represent an actual and potential management force in micro-, small- and medium-scale industry in many developing countries. In 1984 UNIDO and INSTRAW sponsored a workshop to determine if there was, as many felt, a valid rationale for developing training programmes in industrial management exclusively targeting women - and, if so, to identify particular areas where such programmes were most seeded. The workshop made apparent the fact that women face institutional and attitudinal barriers in their quest for greater participation in the industrial development of their respective countries. Existing education/training facilities for the development of entrepreneurial and management skills are often simply not available and, even when available, generally neglect the specific problems with which women must cope. For these reasons, the workshop concluded that there was indeed a very valid need for industrial management training programmes designed and conducted for women.

Following up on these findings, UNIDO and INSTRAW attempted to identify specific areas where the need for training seemed to be most pressing and, in 1985, draft training modules were developed in the areas of general management, training of trainers, project promotion services, entrepreneurship and finance.

Recognizing the need for greater specificity, UNIDO - with the financial support of the Government of Norway - undertook a training needs assessment in 4 SADCC countries (Botswana, Malawi, Zambia and Zimbabwe) in which the Pan African Institute for Development East and Southern Africa (PAID-ESA) served as counterpart. The needs assessment was followed by a curriculum development workshop attended by business women and trainers from the respective countries.

At this point it was clearly recognized that training in either entrepreneurship or management is not enough. Not only do women need training in both of these areas. They also need to acquire a basic understanding of the technology of the industry in which they want to establish themselves if their efforts are to result in a successful profit making, value-added business. As a result of consultations with the United Nations Development Fund for Women (UNIFEM), it was decided that food processing was perhaps the most appropriate area for the first programme because of the crucial role women in the SADCC region play in the food cycle. It was decided too, that this first programme should be targeted to those women who had already ventured into some kind of entrepreneurial activity.

Accordingly, UNIDO set out to develop curricula and training materials. Several approaches were surveyed. The one chosen is both behavioural and experimental in nature. It is based on extensive research carried out in the United States of America*) to determine whether there are specific characteristics of successful entrepreneurs which distinguish them from less successful entrepreneurs. Consultations were held with organizations which have accumulated experience in using this approach, such as the Gesellschaft fhnische Zusammenarbeit (GTZ) of the Federal Republic of Germany, the Cranfield School of Management of the United Kingdom and Managements Systems International of the United States of America. Subsequently the development of the entrepreneurship and management materials was subcontracted to the Cranfield School of Management with inputs from the Pan African Institute for Development, East and Southern Africa - PAID-ESA - particularly on the business environment in Zambia. The development of the materials on food processing technologies was subcontracted to the Intermediate Technology Development Group of the United Kingdom.

*) McBer and Company of Boston, Massachusetts, in association with David McClelland of Harvard University carried out a research project which was cross cultural in its design and employed a research methodology to analyse the actions and thought processes of successful entrepreneurs and to isolate behaviours which distinguish such individuals from less successful entrepeneurs in the sane country. Those behaviors identified as most important were found to be consistant across countries.

This was supplemented by a substantial co-ordinating input from OEKOTOP, a consulting firm in Berlin-West. Consultations were held with GTZ throughout the development of the programme.

The resulting materials were field-tested three times: in early 1989 at PAID-ESA's headquarters in Kabwe, Zambia with a group of 20 Zambian women; in a Training of Trainers Workshop in Lusaka, Zambia, attended by 24 trainers (3 business/management trainers and 3 food technologists each from Malawi, Tanzania, Zambia and Zimbabwe); and in late 1989 in Zimbabwe at Ranche House College in co-operation with the Small Enterprise Development Corporation (SEDCO) with a group of 20 Zimbabwean women.

Each field-test led to a number of modifications in course content and structure. Consequently the present version of the UNIDO Training Programme for Women Entrepreneurs in the Food Processing Industry incorporates the experience gained through three field-tests.

This programme can be used in other countries. However, adaptation will be required in each case to the national business environment, national food consumption patterns and the availability of raw materials and processing equipment.

UNIDO can provide technical assistance for adapting course materials, training of trainers and the organizing of the first course with interested institutions. Subject to availability of funds, course materials will be translated into French, Portuguese and Spanish for use in countries which have expressed interest in the programme.