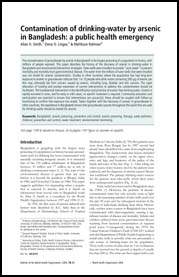 Extent of exposure in the population

In Bangladesh, arsenic contamination of water in tube-wells was confirmed in 1993 in the Nawabganj district (1). Further testing was done in the following years; this included investigations by the Department of Occupational and Environmental Health of the National Institute of Preventive and Social Medicine. Results from various laboratories were collated in a WHO country situation report in 1996 (9). The institutions that provided results included the Jadavpur University in Calcutta, India, the Bangladesh Atomic Energy Commission, the Department of Public Health Engineering's laboratories in the Khulna and Rajshahi districts, and the National Institute of Preventive and Social Medicine in Dhaka. Altogether, 400 measurements were presented in the report, although contamination in some wells was measured by more than one laboratory. In about half of the measurements concentrations were above 50 µg/l (9), which is clearly in excess of the maximum level recommended by WHO of 10 µg/l (10) and greater than the maximum level of 50 µg/l permitted in Bangladesh (7).

To raise awareness of the seriousness of the arsenic problem in West Bengal and to draw attention to the need for studies in Bangladesh, a conference was convened in 1995 by D. Chakraborti and the School of Environmental Studies of Jadavpur University in Calcutta (11). In the years after the conference, the extent of the problem in Bangladesh has become clearer through additional surveys of the water and population, many of which were led by Chakraborti.

In 1997 a project designed to establish the extent of the problem in a sample population was authorized by the government of Bangladesh. Two hundred villages that had already been identified as having arsenic-contaminated tube-wells were surveyed by the Rapid Action Programme. These villages had a combined population of 469 424. About 62% of the 32 651 tube-wells sampled had concentrations greater than 100 µg/l (16).

Surveys of the effects on the population's health have occurred concurrently with the previous studies of groundwater contamination. From December 1996 to January 1997, a three-week survey was conducted by the Dhaka Community Hospital and the School of Environmental Studies. The survey team visited 18 affected districts. Of the 1630 adults and children examined, 57.5% of them had skin lesions due to arsenic poisoning (11). In another study, approximately one-third of the 7364 patients examined had skin lesions due to arsenic (17).

The actual extent of the contamination and the number of people with skin diseases caused by arsenic might be many times higher than is currently estimated. For comparison, it has been estimated that in West Bengal the number of people exposed to arsenic is 1.5 million, and one estimate of the number of patients with arsenicosis exceeds 200 000 (20, 21). Since the estimate of those who may be drinking arsenic-contaminated water in Bangladesh is in the tens of millions, it is reasonable to expect that unless exposure ends the number of people with arsenicosis will eventually far exceed the number observed in West Bengal. Although all wells and all villagers have not been systematically tested and examined, this should not delay action. The evidence that has accumulated since 1997 has only confirmed that this is a public health threat of great magnitude (Box 1).