In the Balkans, the project encountered some German-German peculiarities: During Albania’s political transition period in 1991 and 1992, the government received a “gift” of more than 460 tons of plant protection products from a German company. The pesticides stemmed from old GDR stocks. As an investigation by the Hanover public prosecutor’s office later confirmed, this was all very legal.

The new government in Tirana requested of the German government in 1992 that the pesticides be taken back, because Albania did not need them.

So, in the summer of 1993, a mixed delegation of experts acting on behalf of the German Federal Ministry for the Environment, Nature Conservation and Nuclear Safety traveled to Albania to investigate the situation and conduct an inventory. The team was also supposed to explore the options for disposing of the pesticides in Albania. The delegation inspected five sites and a “German State Railroad train”, the latter containing 217 tons of pesticides. The inspection revealed no considerable differences between the officially stated quantities and those actually found. Some 375 tons of pesticides were sampled, but another 85 tons in all were stored in lesser amounts at numerous small stores, only two of which could be visited because of the team’s tight schedule.

The experts’ attention soon centered on the “German State Railroad train” at the Bajze border station. Seventeen goods wagons were found parked on a hill at the Montenegrin border station, a mere 3 km from Shkodra Lake, and there was no way to move them. Due to the embargo, the rail connection to Montenegro was closed, and violent storms had destroyed the upcountry tracks.

The cars were full of pesticides in total disorder - and in flagrant disregard of valid international regulations governing the rail transport of hazardous goods. Every sheet steel drum in the entire train was rusty, and large, black stains underneath the cars attested to leakage. Seven tons of delicia emulsion were found in simple 25-liter demi-johns with no more protection against breakage than ordinary wicker jackets like those used on most cider jugs. Delicia emulsion contains 50% camphechlor (technically chlorinated camphene - toxaphene), dissolved in petroleum. Any breakage not only would probably have killed the fish in the nearby lake, but also caused a fire that soon would have spread to engulf the rest of the train, as well.

Chemicophysical analysis of the samples showed that there were 43 different products with 40 different active ingredients on the train. Eleven of those pesticides were either fully prohibited or strictly limited for use by European Union directives. Twelve of the products had been approved for use in the GDR, but not in the Federal Republic of Germany (FRG). Their application was only permissible during a transition period that would terminate at the end of 1994, as dictated by Germany’s reunification agreement. For a few products, the experts recommended further use, but Albania refused: Following privatization of the country’s state-owned farms, the average size of an Albanian farm had shrunk to 1.5 hectares. The rate of pesticide consumption declined drastically, due in part to the unreliable price structure for agricultural produce. Thus, the containers were too large for the potential new users, who were also unfamiliar with most of the pesticides. Consequently, the experts recommended that the train’s entire inventory be safeguarded without delay and transferred to Germany for destruction, because Albania had no suitable disposal facilities. 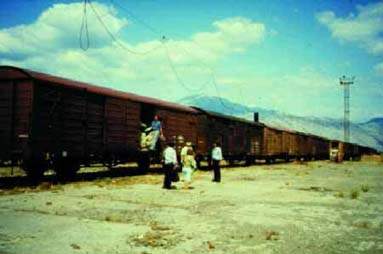 Albania: The railway wagons were full of pesticides.

The Albanian government’s insistence that the pesticides be returned to Germany, plus the symbolic redemption of one ton by Greenpeace, turned the old waste into an expanding political affair. Finally, in 1994, the pesticides were taken to Germany and disposed of - at a cost of DM 7 million.

The delegation made revealing discoveries at other sites, too. In addition to leaky drums and burst bags, they found large quantities of new, perfectly well-packaged plant protection products that had been brought into the country after 1991 by the European Union (EU), the World Bank and diverse manufacturers. These agents, the delegation found, had been put in store and never used. If this is allowed to run its course, the next candidates for disposal are already in the offing.