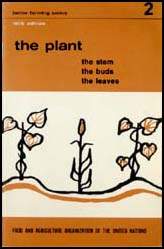 How a stem is made

· The stem can be trailing, for example, that of a groundnut plant, or of a marrow, cucumber or melon.

Let us look at a groundnut plant. What do we see?

A groundnut plant has several stems.
They are easy to cut or crush between the fingers.
They are not hard.
The stems lie on the ground or are upright.

· The stem can be climbing, for example, that of the yam, bean, pea, and all the creepers.

Let us look at a yam plant.

· A yam plant may have several stems.

The stems lie on the soil.

If you push a stick into the ground beside a yam, the stems can be held upright, because they hold on to the stick.
The stem winds round the stick and climbs.

· The stems bear rather large green leaves and clusters of little flowers.

· The stem can be upright, for example, that of millet, maize, sorghum, cassava

Maize has only one seam.
The stem is upright.
It is harder than the stem of groundnuts or yams.

Trees: The stem is upright, very tall, very thick, hard.
It is called the trunk.

The trunk of a tree is its stem.

· The stem can be underground, for example that of garlic or onion.

Let us look at an onion.

· The stems of groundnuts, yams, maize, millet, tomato and okra are green and pliable.

They can be bent without breaking.
They are like grasses.
They are called herbaceous stems.

· The stems of cotton, kapok trees, coffee, cocoa, of all trees, are hard.

They break if you try to bend them.
You have to strike hard to cut them with a machete.
They are called woody stems.

· The stems of groundnuts, maize, millet, tomato and okra last for only one year. They are called annual stems.

· The stems of the kapok tree, coffee, cocoa, the underground stem of yams, last for many years. They are called perennial stems.