FAEPTI was launched in two districts in 1992 and spread to ten districts within five years. The project has worked with leaders at 850 mosques and has trained 6,800 community volunteers who have made personal visits to 102,000 homes. 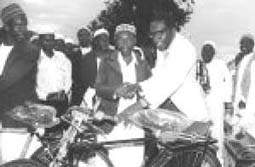 IMAU’s Dr Yusuf Walakira hands over a bicycle to an Imam.

IMAU’s AIDS education efforts begin with the understanding that preventive interventions in Muslim communities are more likely to succeed if the “message bearers” are trusted members of the community, such as religious leaders. IMAU also acknowledges the important role of parents, teachers, and peers in discouraging high-risk behaviour.

Although mass information campaigns and group education help some people modify their behaviour, it is clear to IMAU that others need a more personal approach. Overall, individuals are more likely to adopt safer sex practices if they are perceived as the norm prevailing among their peers and in their community. It is crucial to work at the community level to personalize social norms, such as mutual fidelity and the moral responsibility not to endanger others.

As a respected community leader and head of the mosque, the Imam is the recognized teacher and model for social behaviour within the Muslim community. His teaching occurs during congregational prayers and at intimate family ceremonies such as marriage, birth, and burial. For this reason, IMAU committed itself to promoting behavioural change at the community level, using the mosque, the Imam, and selected community volunteers as the focus of their activities.

In the project design phase, IMAU met with groups of Imams and other Muslim leaders to determine the most effective way to support an AIDS education effort in Muslim communities. It was mutually agreed that an education campaign should combine public health messages with Islamic teachings, such as:

Nor come nigh to adultery:
For it is a shameful deed and an evil,
opening the road to other evils.
Q17:32

The believers must eventually win through. Those who humble themselves in their prayers. Who avoid vain talk, who are active in deeds of charity, who abstain from sex. Except with those joined to them in the marriage bond...
Q23:1-6

In the planning phase, Imams requested that community volunteers be trained as their assistants, to help further take the project to the household level. Imams also requested bicycles to help their team move around the community and income-generating activities to sustain volunteer motivation. IMAU agreed that frequent supervision of project activities would be necessary to ensure volunteer motivation and to check that accurate public health messages were being passed on.

The first step of the project was to determine knowledge, attitudes, practices, and behaviour related to HIV/AIDS in the project area. Mpigi and Iganga districts were selected for the pilot project as they are the districts in Uganda with the densest concentration of Muslims. Funding for the pilot project was received from the United States Agency for International Development (USAID) through World Learning, a U.S.-based nongovernmental organization (NGO), and technical assistance from the U.S. Centers for Disease Control and Prevention.

Nearly 2,000 people responded to the survey. The results revealed that although most Muslims in the project area understood that HIV is transmitted sexually, there was a lack of knowledge regarding transmission from mother to child, as well as the protective value of the condom. The survey also found that Muslim leaders and their communities needed further education about risk factors of particular importance to Muslim communities. These included polygamous marriage (again, this remains an unproved hypothesis), unsterile instruments for circumcision, and ablution of the dead without the use of protective gloves. The survey determined the need to develop sensitive and appropriate messages regarding these practices for Muslim communities.

The Baseline Survey helped to focus project activities and provided indicators for comparison at a follow-up evaluation.

The District Khadi supervises Imams and works with IMAU to ensure that the project is properly implemented. He periodically visits different counties to assess the project’s success and address local concerns. If a mosque team is having difficulty working together, the District Khadi is often asked to intervene

The Imam visits families individually and also teaches about AIDS during public ceremonies. The Imam relates risk-avoiding behaviour back to religious teachings. The Imam supervises his assistants and FAWs. Each mosque team comes together at the end of each month to discuss any difficulties they had during family visits and how best to address these problems.

One male and one female assistant are chosen by the Imam to help him carry out his work. Imam assistants supervise FAWs as well as make individual family visits. Imam assistants visit families already reached by FAWs, to ensure that correct information is being shared. If problems are noted during these follow-up visits, the Imam assistant meets with the FAWs to address the problems.

Five male and female community members are chosen by the mosque community to be Family AIDS Workers. Generally respected by their peers and also viewed as approachable, FAWs visit homes and teach families about modes of HIV transmission and ways to prevent infection. Over time, FAWs are consulted about problems that arise with spouses and sometimes counsel couples. They receive questions about the use and availability of condoms and are often asked to discuss sensitive issues with youth.

In each district, five-day training workshops were designed for Imams and their selected team of volunteers: two assistants (one male, one female) and five Family AIDS Workers (FAWs). The District Khadis and County Sheikhs also participated.

The workshop curriculum was supplied by the Ministry of Health, with special modifications made for the Muslim community based on the findings of the Baseline Survey. Twenty-three IMAU trainers were trained to conduct the workshops.

Workshop participants studied basic facts about HIV/AIDS, as well as: STDs, risk perception, principles of behaviour change, safer sex, AIDS in relation to gender and adolescence, principles of communication, and counselling, and the role of the community in sustaining AIDS prevention activities. The workshops also trained participants in how to conduct home visits to discuss AIDS-related issues with members of their communities.

Teams from each of the 200 mosques in Mpigi attended a workshop, as did teams from half of the 400 mosques in Iganga. Each team member was made responsible for visiting 15 homes each month to pass on the AIDS information and to make themselves available for counselling and consultation.

In order to facilitate movement, a bicycle was given to each Imam for his use and that of his team. The District Khadis, the County Sheikhs and their assistants were also given bicycles. Each FAW was given two local hens, or the financial equivalent, to start an Income-Generating Activity (IGA). IGAs provided incentive for the volunteer work demanded by the project.

“Everyday I visit two homes. I use the teachings of the Qur’an to educate people about AIDS - especially as regards the dangers of promiscuity. My visits are not new. The people here expect me because this is my duty as an Imam.

People feel free to talk to me and I frequently settle marital disputes. In our community we have always had problems surrounding issues of co-wives. The project has given us some tools to solve these disputes. The Qur’an says: Marry women of your choice, two, or three, or four; but if ye fear that ye shall not be able to deal justly (with them), then only one (Q4:3).

I have two wives and eight children. I married before I knew about HIV. I tell men to marry only one wife, and I will not marry again.

A person can avoid AIDS through hard work. A religious person does not sit and pray all day. You have to work hard and with AIDS around you must work harder. My wives and I trust each other because we concentrate on working. We don’t have time to go outside our marriage.

In our community, marriages are stronger, people are avoiding discos and bars, and they are not sharing razor blades at circumcision operations. My biggest task is to bring people to God. Through strengthened faith we can avoid AIDS.”

Therefore give admonition, in case admonition profits (the hearer). Q87:9

After two years, a follow-up survey indicated that there were significant increases in correct knowledge about HIV/AIDS in the project area, including transmission from mother-to-child, and risks involved with unsterile circumcision and ablution of the dead. In addition, community members who were exposed to the project reported a significantly lower number of sexual partners and increased condom use.

Although condom education received initial resistance and this component was left out of the curriculum’s first year in the district of Iganga, knowledge of the protective value of the condom increased overall. Condom distribution was not heavily emphasized, but over 200,000 condoms were distributed informally and the topic of condoms spontaneously arose at most workshops.

Overall, IMAU’s pilot project to educate Muslim communities about HIV/AIDS showed that a cadre of community volunteers can be successfully mobilized to provide education, basic counselling, and the promotion of behaviour change. 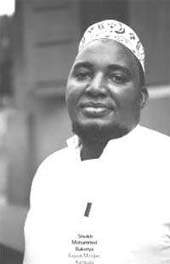 “I have been Imam at Rayaat Mosque since 1979. We began working with the CAAP Project in 1995. I was joined at a five-day training workshop by an assistant and nine members of our community who were selected to become Voluntary AIDS Workers (VAWs).

People must be educated about AIDS. Many think it is caused by a type of witchcraft. We have to tell people thetruth about how the virus is transmitted.

For the past two years, I have used a variety of opportunities to pass on what I learned. I include AIDS teachings when I conduct daily prayers, Khutuba (Friday sermon), and when I speak to families at birth, wedding, and funeral ceremonies. In fact, I will not perform a marriage ceremony until both people have gone for an AIDS test. Couples usually thank me for this.

AIDS is a sensitive topic and visits to individual families continues to be the most important way to reach people in our community. I visit at least two families every day. Itry to focus on large families. My assistants and five VAWs do the same. The first family I visited had 26 members.

Our group chose to put together our money to create two Income-Generating Activities. We buy and sell matooke (bananas) and haveprepared 5,000 clay bricks for burning. The profit from the initial investment of 275,000/ = (U.S. $275) has been 550,000/ = (U.S.$550). We use this to maintain our AIDS education programme and to support other mosque activities.”