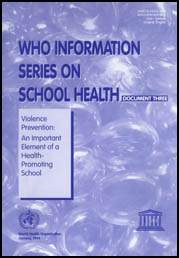 This document introduces health promotion strategies to improve the health, education and development of children, families and community members through a Health-Promoting School. It is based on the recommendations of the Ottawa Charter for Health Promotion(1) and will help people to apply a new approach to public health, one that creates on-going conditions conducive to health, as well as reductions in prevailing health concerns.

The concepts and strategies introduced in this document apply to all countries, however, some of the examples provided may be more relevant to some countries than to others.

Why did WHO prepare this document?

Violence affects everyone. It undermines the health, learning potential and economic well-being of people everywhere. As Carlyle Guerra de Macedo, Director of the Pan American Health Organization, notes, "Terrorism, genocide, political assassination, bloody crimes, abuse, assault, torture, harassment, and other modes of force, in violation of the most basic human rights, have become part of our daily existence.(2)

It is time for us to go beyond treating and trying to manage the health consequences of violence; we must prevent it. It is time to change the social, behavioural and environmental factors that lead to violence. The World Health Organization (WHO) has prepared this document to help people understand the nature of a Health-Promoting School and how efforts to promote peace and prevent violence might be planned, implemented and evaluated as part of the development of a Health-Promoting School. It will focus on simple, concrete steps that schools can take without major investments of resources. It is designed as a starting point, to be modified and enriched as more knowledge and experience is gained in the prevention of violence through schools.

Who should read this document?

This document has been prepared to help those willing to advocate for and initiate violence prevention and health promotion efforts through schools. This may include:

· Members of non-governmental agencies and institutions responsible for planning and implementing the interventions described in this document, including programme staff and consultants of international health, education and development agencies who are interested in working with schools to promote health.

Why focus efforts through schools?

Violence prevention efforts that address factors at all levels will be the most successful. Schools certainly cannot control many factors that contribute to violence — military spending, arms sales, corrupt members of governments and police forces. However, the education sector can assist the network of institutions working to identify and stop the cycle of violence. Schools can address a broad range of behaviours, skills, communication patterns, attitudes and school policies and conditions that support and perpetuate violence. For example, educational programmes can challenge the cultural norms that support violent behaviour against women or ethnic/religious minorities, and teach alternative attitudes and skills which enhance the "non-violent solution of conflicts, respect for human rights, democracy, intercultural understanding, tolerance and solidarity."(8,9) They can also prevent violence from occurring on school grounds, thus providing a safe place in which students and staff can work and learn.

Specifically, this document suggests ways that schools can:

· Develop skills. This document identifies the skills that young people need to learn and practise in order to resolve conflict through peaceful, non-violent and socially constructive means, preferably before they face high-risk situations and before many drop out of school.

· Reorient health services. This document describes how schools can enhance access to screening, diagnostic, treatment and counselling services either within the school or through referrals to community services for those suffering physical or psychological trauma from violence.

· Develop supportive environments. This document describes simple, low-cost changes that schools can make to improve their physical and psychosocial environments and create an atmosphere that supports violence prevention.

· Mobilise community action. Recognising the interdependence of school and community, this document identifies ways the school can interact with community members, parents and local services to reinforce violence prevention initiatives, and to support and guide young people in all realms of their lives.

In implementing these suggestions, schools take essential steps toward becoming a Health-Promoting School.

How should this document be used?

The arguments in Section 2 can be used to advocate for violence prevention interventions in schools. Section 3 helps create a strong basis for local action and for planning interventions that are relevant to the needs and circumstances of the school and community. Section 4 details how to integrate violence prevention efforts into various components of a Health-Promoting School. Section 5 assists in evaluating efforts to make violence prevention an essential part of a Health-Promoting School. Section 6 provides recommendations for ensuring continuity and sustainability in the school and community.