Fossi fuel use for transport has increased dramatically over the past three decades. There has been a 3% annual growth rate in the world vehicle fleet leading, in 1996, to some 800 million vehicles on the world's roads. This growth rate is faster than that of either the world population or economy. For example, in 1965 there were fewer than 60 vehicles per 1,000 people in the world; today there are more than 140.

Transportation is a major cause of air pollution in urban areas. The major air pollution concerns are carbon monoxide (CO) emissions, photochemical smog, toxic emissions, and particulate emissions. Given the high growth rates of vehicle fleets in many developing countries, vehicle-generated environmental problems have the potential to increase steadily over the next decade. Vehicles can have a significant effect on human exposure to pollutants, because their emissions are released close to the ground. For example, vehicles are the dominant source of CO emissions and are likely to contribute to high CO concentrations at street level. At moderate concentrations, CO impairs motor skills and at higher concentrations it significantly impairs the bloodstream's oxygen-carrying capacity. Emissions of benzene, a carcinogenic compound that makes up 1-to- 2% of gasoline by weight, is a major concern. It is given off as a vapor by hot engines and fuel tanks and is present in auto exhausts, partly from the combustion of other aromatic compounds in gasoline.

Particulate pollution, which has been linked to pulmonary diseases and lung cancer, has become the leading public health concern relating to urban air pollution. The relatively high particulate emission levels from diesel engines, the relatively large diesel shares in the motor vehicle populations, and the rapidly growing demand for urban transportation in developing countries indicates that this situation is likely to get much worse unless fundamental changes can be made in the transport system. Exposure to PM10 (particles under 10 microns in diameter) is associated with cardiovascular disease, chronic bronchitis, and upper and lower respiratory tract infections.

Another particularly dangerous air pollutant is lead in gasoline, a highly toxic octane-boosting additive that affects mental development in children and causes kidney damage in both children and adults. Lead is still widely used in many parts of the world, although its use has been largely phased out in many countries both because of its toxicity and because its presence in gasoline makes it impossible to use catalytic converters for controlling tailpipe emissions. Developing countries tend to suffer more, not only because of less stringent environmental standards and weaker enforcement, but also because urbanisation trends are largest in these countries.

Additionally, vehicles contribute to the formation of secondary (photochemical) pollutants, such as ozone and other oxidising agents, which are becoming a widespread urban problem. At high concentrations, ozone impairs breathing capacity, causes eye irritation, and damages materials, vegetation, and crops. Photochemical smog is especially serious in Buenos Aires, Los Angeles, Mexico City, Sao Paulo, and Tokyo and is likely to become an ever more serious problem if current trends in urban transportation persist.

Considering six indicators of air quality: sulfur dioxide, solid particulate matter, lead, carbon monoxide, nitrous oxide, and ozone, the air pollution situation in twenty megacities - sixteen of which are in developing countries - is such that 38% of the indicators register as either "serious problems" or "moderate to heavy pollution" (see figure 5). In fact, most developing country megacities have air pollution levels well above WHO guidelines, and the situation is getting worse. World-wide, air pollution (due to transportation as well as other forms of producing or using energy) is estimated to cause more than 500,000 premature deaths and millions of respiratory illnesses each year. In some countries, where cities are often cloaked in smog, the cost of local air pollution has been estimated at between 0.5% and 2.5% of GDP and as much as 5% of GDP in China (World Bank, 1997).

The poor may be exposed to higher levels of pollution due to transportation, even if they are not the primary users of transportation services, simply because they live or work in close proximity to street traffic. For instance, women working in the informal sector on Bangkok streets have high exposures to traffic-based lead emissions from gasoline fuels and have given birth to newborns with dangerously high blood lead levels as a result [REF]. 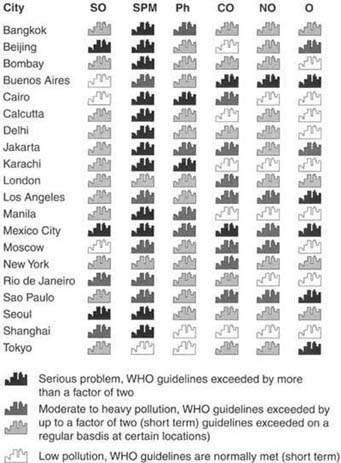