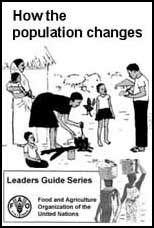 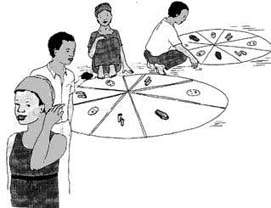 A game to illustrate the effects of births, deaths and migration on population size, and the concept of over-population.

· The leader draws two large circles on the ground and divides them into sections to represent population changes, then draws symbols to represent birth, death or migration in each section as in the drawings on page 11.

· The leader explains that the circles represent the community, one as it was many years ago and one as it is today and that the group will play a game to show how the population changes.

· The group members divide into two groups, one for each circle. Each member of the group in turn tosses five stones into the circle and records the population changes on a large sheet of paper prepared by the group leader.

· The groups then come back together and consider the population changes in the two circles.

· The leader then starts off a discussion about what is causing the rapid population growth of today, what we mean by over-population and what measures need to be taken to control it.

· Understand how births, deaths and migration combine to influence the size of the population and how fast it grows.

· See that over-population occurs when there are too many people for the available resources.

· The diagrams on page 11 to help in drawing the circles for the game. (Draw them with a stick or chalk on the ground.)

· Two large sheets of paper on which to record the population changes. 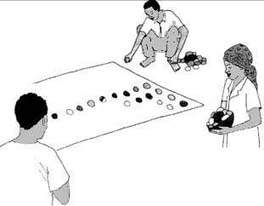 An exercise to enable group members to understand how population can grow.

· The group leader draws a square on the ground to represent a village and explains that the group members are going to fill the square with stones (or leaves) each of which will represent one person.

· The leader explains that the first group member will put one stone, the next two stones, the next four, then eight and so on, continuing with each group member (more than once if necessary) until the square is full.

· When the square is full, the group leader leads a discussion on population growth using the questions on page 18 and any others he or she would like to add.

· The background information and questions on the following pages.
· Participation and interest of the group members.

1. Did you think it would take so few turns to fill the square?

2. How does this exercise relate to population growth?

3. Do you think there will be enough food, land and houses for twice the population in your village?

4. Could you doubled number of people in your house and still have enough of everything?

5. Could you double it again?

6. If every family had only two children, would the population still keep growing? 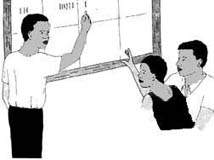 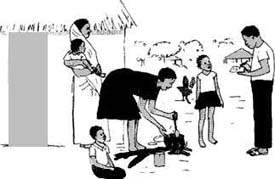