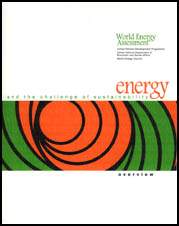 The World Energy Assessment provides analytical background and scientific information for decision-makers at all levels. It describes energy's fundamental relationship to sustainable development and analyses how energy can serve as an instrument to reach that goal. This overview synthesises the key findings of the report, which is divided into four parts.

Part 1 (chapters 1-4) begins with an introduction to energy, especially its relationship to economic development. It then considers the linkages between the present energy system and major global challenges, including poverty alleviation, health, environmental protection, energy security, and the improvement of women's lives. The chapters find that although energy is critical to economic growth and human development, affordable commercial energy is beyond the reach of one-third of humanity, and many countries and individuals are vulnerable to disruptions in energy supply. Further, energy production and use have negative impacts at the local, regional, and global levels that threaten human health and the long-term ecological balance.

Part 2 (chapters 5-8) examines the energy resources and technological options available to meet the challenges identified in part 1. It concludes that physical resources are plentiful enough to supply the world's energy needs through the 21st century and beyond, but that their use may be constrained by environmental and other concerns. Options to address these concerns - through greater energy efficiency, renewables, and next-generation technologies - are then analysed. The analysis indicates that the technical and economic potential of energy efficiency measures are under-realised, and that a larger contribution of renewables to world energy consumption is already economically viable. Over the longer term, a variety of new renewable and advanced energy technologies may be able to provide substantial amounts of energy safely, at affordable costs and with near-zero emissions.

Part 3 (chapters 9-10) synthesises and integrates the material presented in the earlier chapters by considering whether sustainable futures - which simultaneously address the issues raised in part 1 using the options identified in part 2 - are possible. As a way of answering that question, chapter 9 examines three scenarios to explore how the future might unfold using different policy approaches and technical developments. The analysis shows that a reference scenario based on current trends does not meet several criteria of sustainability. Two other scenarios, particularly one that is ecologically driven, are able to incorporate more characteristics of sustainable development. Chapter 10 examines the challenge of bringing affordable energy to rural areas of developing countries. It presents approaches to widening access to liquid and gaseous fuels for cooking and heating and to electricity for meeting basic needs and stimulating income-generating activities.

Part 4 (chapters 11-12) analyses policy issues and options that could shift current unsustainable practices in the direction of sustainable development (as called for by every major United Nations conference of the 1990s), using energy as an instrument to reach that goal. Creating energy systems that support sustainable development will require policies that take advantage of the market to promote higher energy efficiency, increased use of renewables, and the development and diffusion of cleaner, next-generation energy. Given proper signals, the market could deliver much of what is needed. But because market forces alone are unlikely to meet the energy needs of poor people, or to adequately protect the environment, sustainable development demands frameworks (including consistent policy measures and transparent regulatory regimes) to address these issues.

One way of looking at human development is in terms of the choices and opportunities available to individuals. Energy can dramatically widen these choices. Simply harnessing oxen, for example, multiplied the power available to a human being by a factor of 10. The invention of the vertical waterwheel increased productivity by another factor of 6; the steam engine increased it by yet another order of magnitude. The use of motor vehicles greatly reduced journey times and expanded human ability to transport goods to markets.

Today the ready availability of plentiful, affordable energy allows many people to enjoy unprecedented comfort, mobility, and productivity. In industrialised countries people use more than 100 times as much energy, on a per capita basis, as humans did before they learned to exploit the energy potential of fire.1

Although energy fuels economic growth, and is therefore a key concern for all countries, access to and use of energy vary widely among them, as well as between the rich and poor within each country. In fact, 2 billion people - one-third of the world's population - rely almost completely on traditional energy sources and so are not able to take advantage of the opportunities made possible by modern forms of energy (World Bank, 1996; WEC-FAO, 1999; UNDP, 1997).2 Moreover, most current energy generation and use are accompanied by environmental impacts at local, regional, and global levels that threaten human well-being now and well into the future.

In Agenda 21 the United Nations and its member states have strongly endorsed the goal of sustainable development, which implies meeting the needs of the present without compromising the ability of future generations to meet their needs (WCED, 1987, p. 8).3 The importance of energy as a tool for meeting this goal was acknowledged at every major United Nations conference in the 1990s, starting with the Rio Earth Summit (UN Conference on Environment and Development) in 1992.4 But current energy systems, as analysed in the report and summarised here, are not addressing the basic needs of all people, and the continuation of business-as-usual practices may compromise the prospects of future generations.

Energy produced and used in ways that support human development over the long term, in all its social, economic, and environmental dimensions, is what is meant in this report by the term sustainable energy. In other words, this term does not refer simply to a continuing supply of energy, but to the production and use of energy resources in ways that promote - or at least are compatible with - long-term human well-being and ecological balance.

Many current energy practices do not fit this definition. As noted in Agenda 21, “Much of the world's energy... is currently produced and consumed in ways that could not be sustained if technology were to remain constant and if overall quantities were to increase substantially” (UN, 1992, chapter 9.9).5 Energy's link to global warming through greenhouse gas emissions (most of which are produced by fossil fuel consumption) was addressed by the United Nations Framework Convention on Climate Change, adopted in 1992. And in 1997 a United Nations General Assembly Special Session identified energy and transport issues as being central to achieving a sustainable future, and set key objectives in these areas.

The energy industry also recognises the need to address energy issues within a broad context. For example, the conclusions and recommendations of the 17th Congress of the World Energy Council discuss the need to provide commercial energy to those without it, and to address energy-linked environmental impacts at all levels (WEC, 1998).6

Although there seem to be no physical limits to the world's energy supply for at least the next 50 years, today's energy system is unsustainable because of equity issues as well as environmental, economic, and geopolitical concerns that have implications far into the future. Aspects of the unsustainability of the current system include:

· Modern fuels and electricity are not universally accessible, an inequity that has moral, political, and practical dimensions in a world that is becoming increasingly interconnected.

· The current energy system is not sufficiently reliable or affordable to support widespread economic growth. The productivity of one-third of the world's people is compromised by lack of access to commercial energy, and perhaps another third suffer economic hardship and insecurity due to unreliable energy supplies.

· Negative local, regional, and global environmental impacts of energy production and use threaten the health and well-being of current and future generations.

More specific - and more quantifiable - elements of sustainability are identified below in the section on energy scenarios. Before looking into the future, however, some basic features of energy and its relationship to economic development are described, and the linkages between energy and major global challenges are analysed.