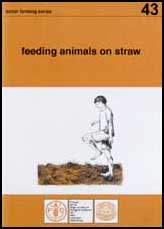 The cultivation of cereals produces large quantities of residues in the form of straw. These residues are poor feed for cattle and are often wasted. However, straw can be a suitable feed if it is treated with a water solution of urea.

5. This section explains how cereal residues such as straw and stalks can be treated to become a suitable fodder for milk production and fattening. The method is simple:

A water solution containing 5 percent urea is applied to the straw.

- The straw is kept airtight for one to three weeks. It is then ready to use as feed.

6. Treatment is preferable where straw constitutes over half of the diet because other feeds are scarce and where higher levels of production are aimed at.

7. The method needs some planning, but it is not difficult. Straw, urea and water have to be mixed in the right proportion and correctly stored. This is explained later

To treat or not to treat

8. The decision to treat or not to treat is the farmer's. Farmers will be most interested in feeding treated straw to milking and fattening animals, which give an immediate monetary return.

9. Feeding with treated straw costs money daily, but this cost can be balanced by a regular income from the sale of milk.

10. Income from fattening animals is not received until some time later. Fattening therefore requires farmers either to have their own money or to have credit for purchasing urea.

11. Farmers are usually less willing to spend money on better feed for bullocks, dry or sterile cows and young stock. The monetary return from feeding working animals treated straw will come much later, when the crop is sold. The other important point is that bullocks can sometimes do surprisingly well on basal diets of untreated straw.

12. If a sterile or dry cow is used for work, farmers may feed it like a bullock. This is acceptable for the sterile cow, but not the dry cow. If the dry cow is going to calve within two or three months, it must be well to have a healthy calf and more milk during lactation.

13. There are very good reasons to feed treated straw to working and milking cows. It will enable them to maintain their body condition and milk production. There is no doubt that calves and heifers will grow faster if they are fed treated straw. However, this is often a low priority for farmers because of a scarcity of ready money.

14. In all cases to make full use of the treated straw, the animals will require supplementation.

15. The way in which treated straw should be fed to animals depends on the situation. For moderate to high levels of milk production, animals require supplementation, preferably with oilseed cakes, cereal brans or polishings. Fattening animals also require feed supplements. Growing animals older than one year and working bullocks require only small quantities of supplements and, with straw of good quality, these two types of animal may require no supplement at all. However, it is best to feed them as much treated straw as they can eat.

16. Cows and fattening animals are used for work in several countries - at least during the most busy part of the cultivation season. To avoid a reduction in milk production and a reduced liveweight gain, while the animals are working they should be allowed to eat as much treated straw as possible. Supplements must also be added to the treated straw to get the full benefit. Supplements can be:

- cottonseed or other oilseed cakes;
- small quantities of green fodder, preferably from legumes, whether cultivated or from tree leaves;
- bonemeal.

17. It is also important that the animals receive sufficient water to drink.

18. It costs money and labour to treat straw. Is it profitable? Not always. If animals have access throughout the year to enough grass, other green fodder or hay of good quality, there is no reason to feed them treated straw.

19. Where there is a scarcity of grass, green fodder or hay, but where there is plenty of straw, feeding with treated straw should be considered. In this case, straw is used instead of being wasted.

20. Farmers who want to keep more animals than they can feed with grass or green fodder can do so if they have enough straw of good quality. Here also, straw is put to good use instead of being wasted.

21. Whether it is profitable to feed treated straw will depend on local prices. The price of straw, supplements and urea as well as of milk, meat and labour is an important consideration.