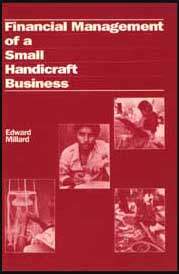 (i) Fixed and variable costs

All direct costs of production are variable costs, because obviously the total expenditure incurred varies according to which product, and how much, is being produced. The same is true of some indirect costs. For example, the supplier of one raw material might demand cash on delivery, necessitating the provision of a bank loan, while others might give 3() days credit. Supervisory staff may be employed for some production processes but not for others. Large baskets might require transportation from a producer's home to the collection centre, which other products might not. It is helpful if a business can distinguish these variable costs from fixed overheads, which will not change whatever the production activity: such things as the rent of the workshop, the telephone bill etc.

The purpose of the costing exercise is to obtain as accurate a record as possible of how much products cost to produce. This is for the purpose of not only pricing, but also monitoring the efficiency of production, gaining knowledge of the different profitability of products, and making decisions about what to produce.

Variable overheads should be allocated to the cost of the product in just the same way as direct costs, by identifying as closely as possible the relationship between quantity of production and expenditure incurred, to yield a unit variable overhead cost (Figure 3).

It is the apportionment of the fixed overheads which gives most difficulty. Here the objective is to treat as part of the cost of the product all of the other expenditure incurred in the production unit, although this has no direct relation to the product itself. The method used is the calculation of what is called an

Whilst this is the same basis as the calculation of direct and variable indirect costs, there are two difficulties:

Production level: The recovery of all fixed costs is critically dependent on attaining the estimated production level. If this falls below estimate, the fixed costs would clearly not be covered. There is no solution to this difficulty, which is more acute for a new business without sales experience. The only possible approach is to make the best estimates of what will be produced over the accounting period for which the fixed costs are identified, and to keep a careful watch on results. In a small handicrafts unit, fixed overheads are generally low. Indeed there can be no better advice for a new enterprise than to keep them absolutely as low as possible.

Individual product apportionment: It is unrealistic to apportion the same amount of overhead to each product, regardless of its variable cost. Therefore a suitable basis has to be found for individual apportionment. In the handicrafts industry, this is probably the number of labour hours taken in the production of each item. Thus the estimated level of production activity in the total period would be expressed in terms of labour hours, and the formula above would yield the overhead absorption rate. This rate would then be multiplied by the number of hours taken to make each item to give the individual product fixed overhead apportionment (figure 2)

No. of labour hours to produce fibre mat4

The advantage of this method is that it does not matter which products arc produced. As long as overall production reaches the estimated level, the fixed costs will be covered.