Programs have already made a substantial contribution to welfare in developing countries. From 1960 to 1990, the number of young dependents (under age 15) per 100 developing-country workers fell from 75 to 60. If, as noted earlier, family planning programs have been responsible for about 40 percent of fertility decline (Bongaarts, forthcoming), they would be responsible for two-thirds of this reduction (Figure 17). An essentially similar conclusion can be drawn from overall dependency ratios, which include older dependents.12 Family planning has already reduced the burdens on and provided substantial opportunities for households and individuals in many countries.

12The argument is based on population projections over this period, separately for China and for all other developing countries, that assume that fertility decline is only 60 percent of that reported. Assumptions and methods follow World Bank (1997a).

But family planning programs still have much to accomplish. Each worker must still provide for 10 to 15 percent more dependents than in industrial countries, with all this implies in poorer health and obstacles to development. These burdens are projected to decline, but such projections are contingent on continued program success - on the family planning movement remaining as strong and innovative into the next century as it has been in the last decades of this century. If programs somehow disintegrate, the reduction in young dependents will be only half what it might be by 2020 and only a fourth of what it might be by 2050 (Figure 18 ). If somehow all fertility decline - due not only to programs but also to socioeconomic advance - came to a halt, the dependency burden would soon begin to rise.13

Figure 17 - Effect of Family Planning Programs on the Dependency Burden in Developing Countries, 1960-2000

The technical challenges for family planning programs have not all been solved. If each program has to capitalize on existing demand to reduce fertility - essential for success, as was argued earlier - each needs the skills to investigate this demand among individuals and households and to develop and implement indigenous responses. Programs also increasingly recognize the need to craft new approaches to reach young adults, say between the ages of 15 and 24. This group, a slightly larger proportion of the population in the 1980s and 1990s (Figure 19), will reach 900 million by the turn of the century and will have considerable influence on the future trajectory of population growth. 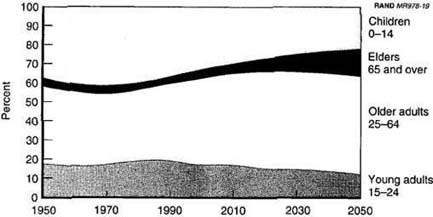 As fertility declines, it becomes concentrated among young adults. As total fertility fell from 7.3 to 6.9 children per woman in Uganda from the mid-1980s to the early 1990s the proportion of all births that were to women 15-24 rose from 46 to 52 percent. In India - where total fertility is much lower, at 3.4 children and where half of all young women are married before age 18 - this proportion has reached 58 percent.14 Many pregnancies at these ages are not intended and would be postponed if possible, even among married women. The unmet need for contraception is increasing among young adults relative to its levels among older women. Figure 20 gives the ratios of unmet need in each age group to overall unmet need, showing how these ratios are rising for young adults as overall contraceptive prevalence increases, even as they fall for older women.15

14Estimated from Uganda Demographic and Health Surveys (1988-1989 and 1995) and the India National Family Health Survey (1992-1993). An additional factor that exacerbates but does not entirely explain the Indian case has been the long failure to provide contraceptive methods useful for spacing births.

15The quadratic equations defining these curves were estimated across 27 countries with data (Westoff and Bankole, 1995, pp. 6, 9) that cover the range of contraceptive prevalence estimates in this graph. R2 for the equation for age group 15-19 was 0.68 and for age group 20-24, 0.72, both significant.

SOURCE: Quadratic regressions estimated from data for 27 countries in Westoff and Bankole (1995, pp. 6, 9).

Much, though not all, of the need for contraception among young adults is for delaying or spacing births. With the realization that delaying births can help reduce fertility faster and further (Bongaarts 1994), programs face new challenges and a need to refurbish their goals and promotional approaches.16 Programs also face additional challenges in improving service quality; dealing with sexually transmitted diseases, including HIV/AIDS; and ensuring broader attention to women's reproductive health needs, as the world community called for at the Cairo conference. Assisting countries to meet such challenges will be difficult without American leadership and the continued engagement of American expertise.

16Any fertility reduction, whether or not due to birth delay, means that future population momentum will be less, or at least will not grow as much as it otherwise would.

Funds to assist developing-country family planning programs were first approved by the U.S. Congress three decades ago. The United States still provides almost half of all donor funding,17 but other countries have increasingly contributed: Europe now provides 40 percent of the total, and Japan, Canada, Australia, and New Zealand all add their shares. With the task of reducing fertility and dependency around the world only half completed, it remains to be seen whether the United States and its allies will stay the course and finish the job.

17The reference is to "primary" donor funding in 1995, which includes funds passed through multilateral agencies and international nongovernmental organizations (UNFPA, 1997a).