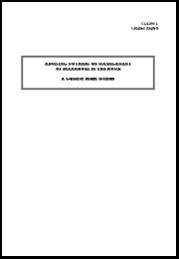 Let us look at an example of a conversation that may happen between a health worker and a mother. In this example, the health worker has already examined the child, named Sami, and has found that he has mild diarrhoea and is not dehydrated. Sami is 9 months old, and is still breastfeeding.

Please read the conversation and answer the questions at the end.

Now answer these questions about the example above:

Give an example of how he praised and encouraged the mother to continue something that she had been doing.

Give an example of an open question he asked to check the mother's understanding.

Why did he refer the mother to a group session?

In general, did the health worker advise the mother correctly? Why or why not?

In a pair with another participant, you will now have the opportunity to practise all the skills you have learned about Advising Mothers. One participant will play the role of a health worker, while the other plays the role of a mother. Use the example you have just read as a model to follow. Remember to follow the process: "Ask-Praise-Advise-Check". Use the pictorial Mother's Card.

When the role-play is finished, switch roles with your partner and repeat the exercise.

When each person has had the chance to play both roles, answer the following questions in a discussion with your group:

What went well in your situation?

What was difficult to do?

What improvements could you make in your method of advising mothers?