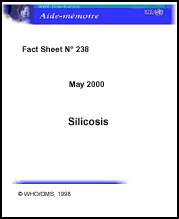 Silicosis, one of the oldest occupational diseases, still kills thousands of people every year, everywhere in the world. It is an incurable lung disease caused by inhalation of dust containing free crystalline silica. It is irreversible and, moreover, the disease progresses even when exposure stops. Extremely high exposures are associated with much shorter latency and more rapid disease progression.

Silica dust is released during operations in which rocks, sand, concrete and some ores are crushed or broken. Work in mines, quarries, foundries, and construction sites, in the manufacture of glass, ceramics, and abrasive powders, and in masonry workshops is particularly risky.

Sandblasting is one of the high-risk operations for silicosis. Any abrasive blasting, even if the abrasive does not contain silica, may pose a silicosis hazard when it is used to remove materials that contain silica, such as remains of sand moulds from metal castings.

Some operations, like dry sweeping, the clearing of sand or concrete, or the cleaning of masonry with pressurized air can generate large dust clouds. Thus even in open air these activities can be hazardous.

Action should be taken before exposure happens.

Silicosis results in conditions such as lung fibrosis and emphysema. The form and severity in which silicosis manifests itself depend on the type and extent of exposure to silica dusts: chronic, accelerated and acute forms are all recognized. In later stages the critical condition can become disabling and is often fatal. A frequent cause of death in people with silicosis is pulmonary tuberculosis (silico-tuberculosis). Respiratory insufficiencies due to massive fibrosis and emphysema (respiratory tissue loss is not always present), as well as heart failure, are other causes of death.

In certain places in the world, an age-old scenario is being repeated. In the 16th century Agricola wrote of mines in the Carpathian mountains in Europe: “women are found to have married seven husbands, all of whom this terrible consumption (silico-tuberculosis) has carried off to a premature death”. Only a few years ago certain villages in Northern Thailand were called “villages of widows” because of the large number of pestle-and-mortar-making workers who died early from silicosis.

· In Viet Nam the cumulative number of diagnosed cases has now reached 9 000. They constitute 90% of all cases of occupationally compensated diseases. Some 18% of workers engaged in surface coal mining, quarrying, foundry and metallurgy have been found to have silicosis.

· In India, a prevalence of 55% was found in one group of workers, many of them very young, engaged in the quarrying of shale sedimentary rock and subsequent work in small, poorly ventilated sheds. Studies on silicotic pencil workers in Central India demonstrated high mortality rates; the mean age at death was 35 years and the mean duration of the exposure was 12 years.

· In Brazil, in the state of Minas Gerais alone more than 4 500 workers have been diagnosed with silicosis. In drought-affected regions in the north-east of the country the hand-digging of wells through layers of rock with very high quartz content (97%), an activity that generates great quantities of dust in confined spaces, resulted in a prevalence of 26% of silicosis, with many cases of accelerated forms. The state of Rio de Janeiro banned sandblasting after a quarter of shipyard workers were found to have silicosis.

· In the USA, it is estimated that more than one million workers are occupationally exposed to free crystalline silica dusts (more than 100 000 of these workers are sandblasters), of whom some 59 000 will eventually develop silicosis. It is reported that each year in the USA about 300 people die from it, but the true number is not known.

· Abrasive blasting with silica sand, often used to prepare surfaces for painting, has been associated with exposures 200 times greater than the level recommended by the US National Institute for Occupational Safety and Health. This agency recommended that silica sand be prohibited as an abrasive blasting agent.

· The Colombian Government estimates that 1.8 million workers in the country are at risk of developing the disease.

Free crystalline silica, SiO2, is one of the most common minerals in the earth’s crust. It is found in sand, many rocks such as granite, sandstone, flint and slate, and in some coal and metallic ores. The three most common forms are quartz, tridymite and cristobalite.

Inhaled crystalline silica (in the form of quartz or crystobalite) from occupational sources is classified by the International Agency for Research on Cancer (IARC) as a Group 1 human lung carcinogen.

Respirable silica dust may be invisible to the naked eye and is so light that it can remain airborne for a long time. It can thus travel long distances in the air and so affect populations not otherwise considered to be at risk.

There is widespread lack of awareness of the problem and its magnitude as well as lack of knowledge of available solutions.

Under-diagnosis and under-reporting are frequent. For example, a study involving 3440 tuberculosis patients in a Brazilian hospital discovered 119 undiagnosed cases of silico-tuberculosis in persons who previously were exposed to silica dust during their working life. Altogether the statistical and epidemiological data on silicosis are very poor, especially in small enterprises and construction industry, where many workers are not registered.

Other concerns include: the lack of primary preventive measures, such as control of dust generation, release and spread into the workplace, and respiratory protection; shortcomings in legislation and labour inspection for enforcement; and more resources are allocated to dealing with the consequences of harmful occupational exposure rather than to its prevention.

Alice Hamilton (1869-1970), pioneer occupational physician and hygienist who conducted major studies on silicosis in the USA said: “obviously the way to attack silicosis is to prevent the formation and escape of dust...”.

· At the turn of the 20th century in Vermont, USA, introduction of pneumatic tools to the granite cutting industry was followed by a dramatic rise in death rate from silicosis. (Pneumatic tools generated much larger quantities of free crystalline silica-containing dust.) In the late 1930s, dust control measures were introduced and the number of new cases of disease gradually decreased, until there were virtually none by 1967.

· In Switzerland, stricter controls in the 1970s and 1980s led to approximately six-fold reduction in the number of silicosis cases per year (many residual from previous exposure).

Diagnosis and health surveillance are essential components of any programme aiming at eliminating silicosis. Although medical and radiological examinations can only detect and not prevent silicosis, these are important complements to primary prevention. WHO has issued a publication on this topic (Screening and surveillance of workers exposed to mineral dusts*). However, surveillance should be considered as a complement to control strategies and never as a replacement for primary prevention.

The ILO/WHO International Programme on the Global Elimination of Silicosis, launched in 1995, aims at the global reduction and eventual elimination of silicosis. It includes:

· the formulation of national, regional and global action plans;

· mobilization of resources for the application of primary and secondary prevention;

· monitoring and evaluation of results; and

· the strengthening of the required national capabilities and the establishment of national programmes.

It will greatly rely on co-operation between industrialized countries, developing countries and international organizations.

In view of the world-wide magnitude of occupational exposure to dust and prevalence of silicosis and other occupational dust-related diseases, as well as an acute need for increased preventive action, WHO started, under the Prevention and Control Exchange (PACE) Initiative, programmes to train people in developing countries in the prevention and control of dust exposure in the work environment.

As an initial step in the PACE programme, WHO has prepared a basic document (see below*) covering topics such as:

· characteristics of dust and its sources;

· available technical and personal measures to prevent or control the generation, release and dissemination of dust in the workplace; and

· integration of control measures into effective and sustainable programmes.

WHO Prevention and Control Exchange (PACE): Hazard Prevention and control in the work environment - airborne dust, Geneva, WHO, WHO/SDE/OEH/99.14, 1999; available from Occupational and Environmental Health, WHO, Geneva.