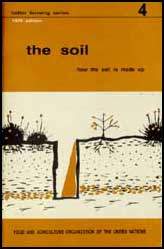 Sand is found everywhere.
Rain carries sand into hollows and streams. It is then white- or yellow and shining because it is clean.
In the soil, sand is grey and does not shine, because it is mixed with earth.

Let us take a closer look at some sand.

It is made up of little grains.
These grains are not all alike.
They are very hard. If you rub a piece of iron with them, they scratch the iron because sand is harder than iron.

Take a can.
Make a hole in the bottom of it.
Fill the can with sand.
If you pour water on to the sand, it goes through.

If you pour water on to the sand, it goes through

We say sand is permeable because it lets water through.

Take some dry sand in your hand and let it run gently.
The grains slide over each other; you cannot make a ball of sand.

Almost all soils contain sand.
Soils that contain a lot of sand are called sandy veils.

The grains of sand do not stick together.
In the rainy season, water easily carries them away.
In the dry season, the wind can lift them up and carry them a long way. In the northern savannas people speak of a sand wind.
Groundnuts, cassava, yams and coconut trees grow very well in sandy soils; the roots easily penetrate them.
But sandy soils hold water and mineral salts badly.

Adobe walls and pots are made of earth.
This earth is called clay.
Usually the clay is found in the third soil layer: the red layer.
Because of this, a hole has often to be dug to get earth for bricks.
Usually the clay is mixed, which is what gives it a red or sometimes a brown or black colour.
When the clay is not mixed, it is white. This is kaolin. It is pure clay. Kaolin is used to whitewash houses.

Wet clay takes whatever shape it is given, such as bricks, pots and stoneware Jars.
Wet clay sticks to the fingers; it makes mud.
When it is dry, clay forms hard lumps.
If you crush a lump of clay, it becomes dust finer than flour.
When it is dry, brown or black clay loses its water and cracks.
Red clay also loses its water, but does not crack.
Red clay can be used to make bricks and stoneware jars.
If dry clay is made wet again, it becomes soft and sticky.
If clay is baked, it becomes very hard. The stoneware jars keep their shape.

Take a can.
Make a hole in the bottom of it.
Fill the can with clay.
If you pour water on to the clay, it does not go through.
We say clay is impermeable because it does not let water through.

Water does not go through

Clay in the soil

Almost all soils contain clay.
Soils that contain a lot of clay are called clay soils,

When it rains on a clay soil the water does not go through the soil easily. The water takes a long time to disappear. You can see the mud. So clay soils are

Soils with much clay are difficult to work and are often too wet.
Soils with little clay are easily carried away by water and by the wind.

Certain soils are neither sandy nor clay soils. They are made of silt.
Silt is made up of grains much smaller than sand grains.
Because of this, silt does not let water through as easily as sand does.
Silt does not form dust as fine as clay dust; because of this it is not impermeable like clay.
Wet silt does not stick like clay. However, silt can be made into lumps.
Soil that contains a lot of silt is called silty soil.

· not as light as sandy soils.

The silt grains are closer together than the grains of sand.
Thus water does not go through so easily; silty soils do not dry quickly.
They are harder to work than sandy soils.
Wind and rain do not carry them away so easily.

Silty soils stick less than clay soils.
They are less hard to work.
They do not crack when dry.

In the soil there are dead leaves and roots.
They rot and change into humus.
You cannot see humus as you see sand, clay and silt.

Leaves, branches and dead trees rot in the soil.
We say they decompose.
Even big trees rot in a few years on wet soil.
Many worms and insects live in a rotting tree. You can often see them.
But other living things cannot be seen. They are too small.
These are called microbes.
There are very, very many of them. In a lump of earth as big as a lump of sugar there are millions and millions of microbes.
They feed on leaves, on dead branches, on organic matter (see Booklet No. 2, page 23).
They also need air to breathe, and water.
If there is no air and water, the plant does not rot. The organic matter does not decompose.

Organic matter decomposed by the microbes in the soil is humus.

This structure is bad because there is no humus.
The sand, clay and silt are not joined together.
Air and water circulate badly.
Roots penetrate badly, breathe badly and feed badly.
This is a bad soil structure.

The structure is good, because the sand, clay- and silt are joined together by a mixture of clay and humus.
Air and water circulate well.
Roots penetrate well, breathe well and feed well.

Sandy soils with humus hold water better.
They are less easily carried away by wind and rain.

Clay soils with humus are less hard.
Air and water circulate better.
Soil without humus is not good soil.