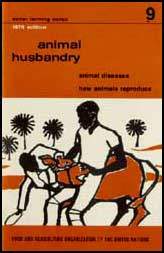 Production of stock is not enough. You have to sell.
It is not enough to have a fine herd. You must be able to sell your animals at the right time, at a good price.

Animals are sold for their meat.

Often live animals are sold by their size. They are not weighed. The price is not fixed according to the animal's weight.

Sometimes animals are slaughtered and the meat is sold in the village or at the market. No attention is paid to the weight or the quality of the meat.

Nowadays meat should be sold by weight. Several farmers can get together to buy a weighing machine.

It is easy to sell your animals at the time of traditional festivals. A stock farmer should arrange for the sale of animals for these festivals.

But apart from these festivals you may have difficulty in finding buyers. You may have to keep for a long time animals which are ready to be sold. You have to go on feeding them uselessly,, the animals do not benefit from the food, and you lose money.

Animals are sold for breeding.

We saw that it is very important to have good breeding animals (see pages 18 and 19).
Animals of a good breed that have good parents can be sold at a high price.

Modern farmers are ready to spend money to buy a good sire to improve their herd.

The yield of a herd

If you can sell each year many fat animals, the herd is said to have a good yield.

A herd has a good yield:

· if you raise animals of a good breed.

The animal husbandry service is finding out which breeds produce most and thrive best in each region.

· if the animals grow quickly.

On the same pasture, all the animals do not gain weight as quickly as each other.

You should keep only the offspring of males and females that have grown quickly.

· if there are many dams which give birth each year.

You must also sell the surplus males; they eat but are no use.

You must keep the most fertile dams and make them breed.

· if the animals are well cared for,

If you take good care of the herd, all the young grow up and become strong animals.

Then you can sell them and earn a lot.

If many of the young animals die, the farmer does not earn as much as he could.

In Africa many young animals die because of lack of care.

Even if diseases do not kill the animals, they do them a lot of harm.

The animals become very weak and do not fatten much.

It takes a long time for animals that have been to fatten up for sale.

If animals are well fed, and have enough to drink all the year, they quickly become big and heavy.

If they are badly fed, and if they do not drink enough during the dry season, they lose a lot of weight.

Animals lose in the dry season kilogrammes they have put on in the rainy season.

· Farmers do well to form groups (see Booklet No. 7, page 28); this gives them greater strength in regard to dealers.

A dealer will readily go out into the bush to buy animals if he is sure of finding some. He knows that he will not make his journey for nothing, and that he will not waste his time looking for animals.

A group of farmers can make an arrangement with the dealer.

The group agrees to sell regularly.

The dealer agrees to buy regularly

To succeed, a group must:

· not be too big. Everyone knows each other and everyone trusts the others
· have simple and clear rules.
· have one man in charge who makes sure that the rules are kept

It is in the interest of farmers to get together not only for sales, but also in raising their stock. Fences will be made more quickly. feeding will be more regular. Sales will be easier.

By organizing the sale of their animals, farmers can organize their stock raising.

· They can plan the birth dates with a view to the sales dates.
· They can plan what feeding the herd will need, the use of pastures, so that no food is wasted.
· They know at what time they will get money, and can better think about what they will do with it.

Here is a practical example of what the course means.