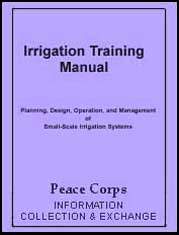 In 1988 Agro Engineering conducted the small-scale irrigation training for both pre-service and in-service Volunteers working in irrigation development in Honduras. One of the major problems encountered during the training was the lack of appropriate reference materials applicable to small-scale irrigation development. There are numerous references available for irrigation, but most have been designed for developed country conditions or specific irrigation problems in developing countries. Thus the idea of producing a good training manual with an accompanying reference manual was born.

The content and scope of the project were discussed with Mr. Jaime Henriquez of OTAPS and Mr. Alfonso Barahona, the APCD who directed the irrigation training programs in Honduras. The outline and scope of work were reviewed and modified a number of times, and in September of 1991 Agro Engineering was asked to produce the manual.

Agro Engineering assembled a team of professionals with over 40 years combined experience in irrigation to write the manual. The authors have worked in over 20 countries in Asia, Africa, and Latin America with Peace Corps, CARE, USAID, universities, and several grassroots organizations. Together with Peace Corps personnel from OTAPS they further refined and amplified the outline.

The focus of the training manual was to be on Volunteers who do not have formal training in irrigation but who do have some math skills and knowledge of agriculture. Thus the Volunteers would be agronomists, agriculturists, engineers, and even business majors. The individuals who design and manage irrigation projects should all be able to use basic scientific calculators to add, subtract, multiply, divide, find square roots and averages. All of the authors have worked on projects where pipelines have failed, structures have been undersized and washed out, or other problems have developed because of a lack of basic irrigation knowledge on the part of the irrigationists. Thus the manual was developed to serve the needs of the agricultural Volunteers working with irrigation.

A word about the authors:

LeRoy Salazar is an agricultural engineer specializing in irrigation and drainage. He has lived and worked throughout Latin America and Asia and has almost twenty years of experience in his field. He has designed and implemented numerous irrigation training programs for the International Irrigation Center, USAID, Peace Corps, Utah State University, Colorado State University, Ohio State University, and various other private and public entities. He has written a number of training publications, including Water Management on Small Farms: A Training Manual for Farmers in Hill Areas and Irrigation Scheduling: A Training Manual for the International Irrigation Center.

Jim Tolisano is a watershed resource specialist with extensive experience in training with Peace Corps, CARE, USAID, and various other entities. He has developed a number of training publications.

Keith Crane is an agricultural engineer specializing in irrigation. He spent three years as a Peace Corps Volunteer working with irrigation in Honduras, then served an additional year in Bolivia. He designed and conducted the Hillside Agriculture course for Peace Corps in Honduras in 1991 and assisted in the training of irrigation Volunteers in 1988.

Lee Wheeler is an agricultural engineer. He has served in the West Indies in Peace Corps working with both irrigation and conservation. He was an irrigation engineer with the Soil Conservation Service. His 14 years of experience in irrigation also include irrigation development work in Guatemala and Honduras. He has designed and conducted a number of irrigation training programs for such entities as the International Irrigation Center and the Peace Corps.

David Radtke is an agronomist who worked as a Peace Corps Volunteer in Guatemala for five years. During this time he designed several small-scale irrigation systems. He has 8 years experience as an irrigation agronomist.

Maya ter Kuile is an agronomist who has worked and lived in several Latin American countries including Guatemala, El Salvador, Costa Rica, Honduras, The Dominican Republic, and Mexico. She has conducted a number of training programs with the International Irrigation Center. She trained Peace Corps Volunteers in irrigation agronomy during 1988.

The authors wish to thank a number of other people who provided valuable input to the manual:

-Special thanks go to Mr. Gaylord Skogerboe, Director of the International Irrigation Center who provided valuable assistance on the content and format for the manual.

-Ms. Amy Benner, another Returned Peace Corps agricultural Volunteer working with Agro Engineering. Her input and assistance in bringing the manual to its final form is greatly appreciated.

-Mr. Jaime Henriquez, who saw the value of the project and was able to prioritize the work before he left Peace Corps.